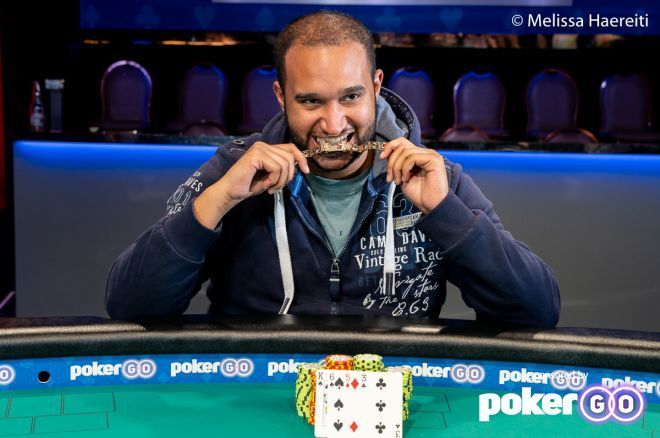 Another event is in the books at the 2019 World Series of Poker as Ismael Bojang was crowned champion of Event #40: $1,500 Pot-Limit Omaha after beating 1,216 entries. Bojang beat James Little heads-up and took home his first WSOP gold bracelet and a top prize of $298,507 while Little had to settle for second place and $184,424.

It was Bojang's tenth cash of the 2019 WSOP and his 75th overall cash at the WSOP, but he is flying back to Germany on Thursday and not staying for the rest of the series.

"My flight is early tomorrow but I really don't care. I just want to party now!''

''I would love to stay longer but I have important stuff to do at home that I'm really looking forward to. Family stuff, weddings, my girlfriend is waiting. I don't think I'll come back for the Main Event',' Bojang said when asked about his plans for the rest of the series.

Bojang might have a flight in the morning but tonight he will enjoy himself a little bit in Las Vegas: ''I don't know how I'm going to celebrate. Maybe I order every drink in Vegas! I'll spend time with my friends. My flight is early tomorrow but I really don't care. I just want to party now!''

The final day started with only 21 players left and it took a little less than an hour to get down to the final 18 players. Sven Reichardt (21st - $8,807), Benjamin Ludlow (20th - $8,807), and Stefan Ivanov (19th - $8,807) were the first victims of the day. Ludlow lost his last ten big blinds with aces against the kings of eventual third-place finisher Benjamin Zamani.

Zamani had a very impressive start to the day and he started the final table with a commanding chip lead. It didn't take too long for Zamani to send even more players to the rail. He was the one to eliminate Matthew Mueller (9th - $22,215) and Glen Cressman (8th - $28,940), and Zamani went on to capture even more chips to claim 40% of the chips in play with seven players left.

Richard Tuhrim (7th - $38,189) and Mihai Niste (6th - $51,041) were next to exit. Niste managed to reach the final table of Event #25: $600 Pot-Limit Omaha Deepstack earlier in the series where he finished in fifth place and he cashed for $50,732. Niste managed to earn a little bit more at his second final table despite finishing one spot lower.

Start-of-day chip leader Denis Bagdasarov was eliminated in fifth place for $69,082 and Johannes Toebbe ended in fourth place for $94,669 despite holding on to the chip lead for a little while during four-handed play. Zamani's dominant final table appearance then came to an end after Bojang had flopped a straight against Zamani's overpair to the board, the nut-flush draw, and a gutshot to the nut-straight. The board bricked out and the two-time WSOP champion was eliminated in third, banking $131,335.

Bojang started the heads-up match with a commanding chip lead and Little never came close to evening the stacks. Bojang eventually called with the lower end of a straight while Little had two sets. The board didn't pair on the river and Bojang was crowned champion.