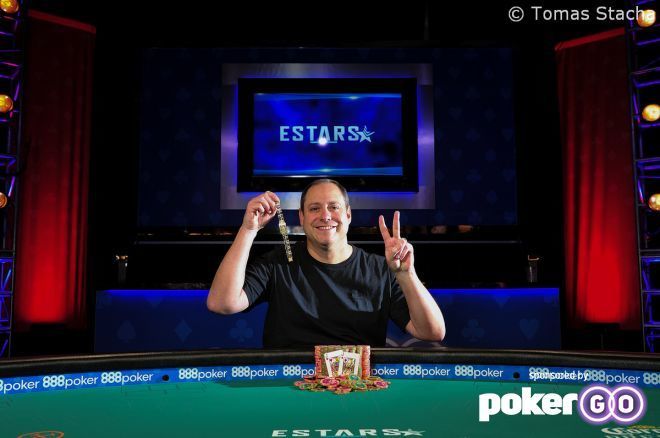 The 2019 World Series of Poker Event #66: $1,500 Limit Hold'em attracted 541 players, and after finishing as chip leader on both Days 2 and 3, well-respected poker pro David “ODB” Baker closed it out at the final table of six without relinquishing that lead.

“It was a huge burden,” Baker said of the seven years between bracelets. “All my friends had more bracelets than me, so I’ve been really wanting to get No. 2 for a long time and finally did. I’m thrilled. I think it’s pretty obvious I wear my heart on my sleeve when it comes to the WSOP and what it means to me.”

"I wear my heart on my sleeve when it comes to the WSOP and what it means to me."

In addition to the six-figure score, Baker secured even more as he closed out several bracelet bets.

“I have six or seven bracelet bets, a few for more than others, so just to bring those home [was nice]. I live for the pressure and I wanted it,” he explained. “Now that I have those taken care of and I know I can’t lose no matter what happens to all these other players out there that I have bets against, that’s a relief. I’m freerolling those. Maybe I can get another and punish them a little more.”

Baker held a big lead coming into the final table and came in with a game plan.

“My hope was to keep people around. No disrespect to any of my opponents, but Brian [Kim] was the one person I was worried the most about coming in. I’ve played with him a lot. He’s got very good hold’em skills, he had a really good rail, and he was my focus … I just wanted to chip up and have them grind down.”

To give you an idea of just how smooth things were for Baker, his biggest road bump was a four-hand downswing.

“I had one little stretch where I lost like four hands in a row, but luckily, I had such a big chip lead that it didn’t really affect me and I was able to rebound pretty quickly,” he offered.

Baker took some time to shoot winner photos and speak with the media, but he wasn’t going to rest on his limit hold’em laurels long.

“Next up is the $10K limit hold’em that started a couple of hours ago. I’m going to grab a bite to eat and come back and register … we’ll get back to building more towers.”

The final table actually began on Monday night and play was halted after a trio of eliminations. Three-time bracelet winner Greg Mueller exited in ninth place ($10,418), while Danny Woolard hit the rail in eighth place ($13,609). The elimination of Kenneth Donoghue in seventh place ($18,118) brought an end to Day 3 with the final six players slated to return at Noon on Tuesday.

Chicong Nguyen came into the day with just six big blinds so it was no surprise to see him fall early. It happened after the blinds took a bite out of his stack and then he raised the cutoff with king-seven. Brian Kim was in the big with ace-six, some raises ensued, and the chips went in on the turn with Kim in front with a pair of sixes. The river was a brick and Nguyen bowed out early for $24,574.

The other short stack, 2017 WSOP Player of the Year Chris Ferguson, was the next to go after losing ace-three to Baker’s pocket nines all in preflop. It marked Ferguson’s 15th cash of the 2019 WSOP and third final table appearance – all three of which came in a one-week span.

Japan’s Ruiko Mamiya grew short during four-handed play and got the last of her chips in holding an open-ended straight draw against Kim’s top pair. Mamiya failed to get there and had to settle for fourth place and $47,747 in prize money.

Baker maintained his lead during three-handed play while Kim and Dominzo Love did their best to hold on. Eventually, the latter slid and busted in third place to set up a heads-up match with Baker holding a nearly 3:1 chip lead over Kim.

Baker whittled away at Kim before the final hand developed. Kim flopped top pair of nines with an ace kicker only to find himself behind Baker’s two red jacks. A diamond on the turn gave Kim a flush draw, but he missed when the river bricked. Kim took home $99,564 for his runner-up finish.

Baker intends to put in a full-time grind for the last two weeks of the summer, but now that he’s won both WPT and WSOP titles in a single year he’s let his mind wander overseas.