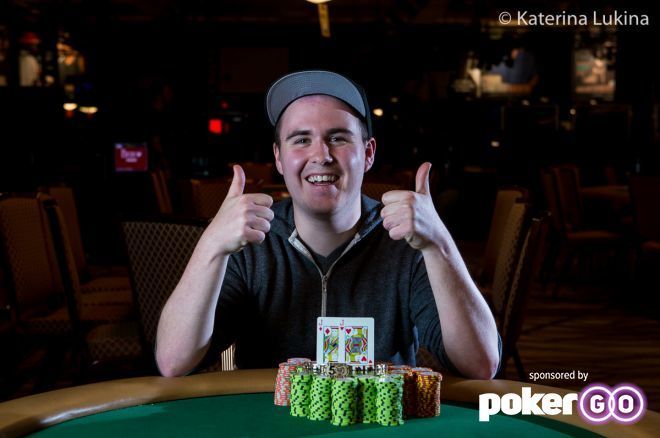 He arrived only for a couple of weeks, but he's leaving the town with a bracelet on his wrist. Sweden's Jerry Odeen came back from a short stack to conquer a 1,250-player field in the 2019 World Series of Poker Event #80: $1,500 Mixed No-Limit Hold'em, Pot-Limit Omaha.

Odeen made sure to clear the board in the early afternoon. He had a flight to catch at 9:30 p.m. and he needed to spare some time for the customs: after all, he's taking home the $304,793 first-place prize and some fancy new jewelry.

"This is something I've always wanted since I started watching poker when I was like 15 years old," Odeen revealed.

Ten years later, Odeen has accomplished what he'd envisioned, claiming that he wasn't ever going to quit poker before he'd win a bracelet. "It feels pretty surreal," Odeen said.

"In no-limit hold'em, especially playing short stack, I think I know what to shove with and what to fold."

Now he navigated through the final table which saw seven players return for an extra day to play it out. A ton of chips were physically present at the table, but the numbers don't lie. It was an affair full of shallow stacks.

For such a seasoned online player, that might be a dream spot. Used to playing around the 20 or 30-big blind mark, Odeen knew the setup was tailor-made for his abilities.

"In no-limit hold'em, especially playing short stack, I think I know what to shove with and what to fold," Odeen said.

He was the second-shortest when the play resumed at noon, but a few non-showdown wins vaulted him to the middle of the pack. But Odeen wasn't the only prolific online crusher at the table, with high-stakes regular Luc Greenwood few seats to his right.

Greenwood got the best of the first span, steadily increasing his stack just like the Greenwood brothers always do. But nobody is perfect, not even the most talented players at the tables. Unfortunately for Greenwood, a disastrous misclick would rapidly change the script.

With five players left, Greenwood held the chip lead while Odeen wasn't far behind, having coolered Eddie Blumenthal to bust him in sixth place following Jeremy Kottler's elimination in seventh.

Greenwood tangled in a PLO pot with Peter Linton which saw Linton bet pot on the turn. Greenwood wanted to call but accidentally slid forward 1 million more and his misstep resulted in a forced raise, which provoked a shove from Linton. Greenwood had to call off. He wouldn't get bailed out with his wrap as the river bricked, leaving Linton's two pair ahead.

"I don't think I lost a single all in so it's tough to lose then."

Odeen knew that the misclick that saw Linton double helped not only Linton, but also Odeen's own case. He had been second in chips and his hands had been a little bit tied considering the money jumps and Greenwood's undisputable skills.

"I had to stay away a bit from the action, and while this was great for me, I feel sorry for him. Everybody has done it, every poker player. But it's such a bad timing," Odeen said about Greenwood's error.

Suddenly, what could have been perceived as a final table lined up for Greenwood's landslide became an Odeen's. He continued to eliminate his opponents one by one, dispatching former bracelet winner Ayaz Mahmood in fifth and then sealing Greenwood's fate.

"I don't think I lost a single all in so it's tough to lose then," Odeen said.

His rampant run carried on. Odeen was well aware of Linton's pot-limit Omaha abilities and he tried to concentrate mostly on no-limit hold'em.

"Peter seemed way more comfortable playing PLO so I decided to play pretty tight unless I was the button since he was not gonna give up a lot of pots against me," Odeen admitted.

However, the conditions were favorable for his gameplan and his main discipline, given the big blind ante which creates bigger pots preflop. So Odeen opened up in the two-card game.

"I don't think people think enough about how big of a difference the ante actually makes," Odeen claimed.

While he said that PLO might sometimes be a guessing game for him, especially on a final table with the ICM implications, Odeen had no trouble putting his money in against short-stacked Adam Demersseman, holding aces. Odeen's starting hand prevailed and he added another notch to his streak of KOs. Linton was the only one left to tackle.

The heads-up match would last only a matter of minutes. Odeen found an easy spot to close things out, raise-calling with pocket jacks in hold'em. Linton's ten-nine suited caught an open-ender on the flop, but he failed to hit his eight outs on the turn and river.

Odeen's dream became a reality and he shouted some spontaneous words in his native language. He knew he was going to fly home with the bracelet.

"It's achievable, but, obviously, you need a lot of luck to get here," Odeen was well aware.

With only a few hours left before he was bound to board a plane, Odeen's short trip to Vegas had turned out perfectly. He said he played only six events.

Having expressed excitement for his accomplishment, Odeem didn't seem to be less excited about going home to see his girlfriend.

"She will be very happy."

While this tournament has concluded, there's more to come from the 2019 World Series of Poker. Click here for live updates from the 2019 WSOP Main Event, or click here for an overview of all events that are currently going on in the Rio All-Suite Hotel and Casino. Want to watch final tables live? Sign up for PokerGO.