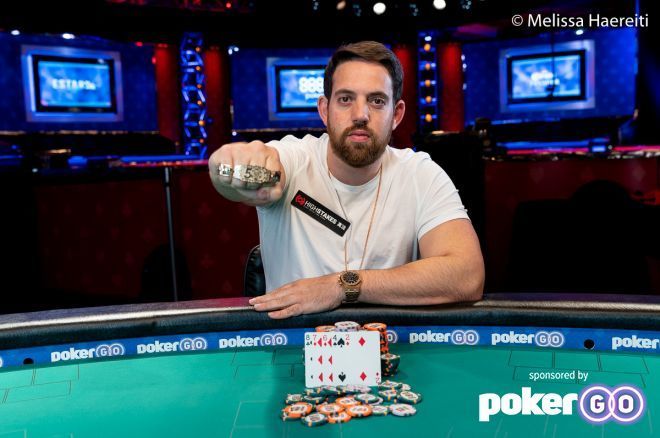 "It feels pretty good, pretty relieving. It's a nice thing to have as a poker player."

"It feels pretty good, pretty relieving. It's a nice thing to have as a poker player," Schwartz said.

Notoriously known for his outbursts from his twenties, Schwartz has worked on his approach to the game to become one of the best all-round players in the world.

And he really had to showcase both mental and technical preparation today. The path towards the desired hardware led through an incredible three-handed grind which lasted over five hours.

"Maybe the old me would've just got too frustrated and tilted but I just took a deep breath," Schwartz said.

Schwartz' composure remained untouched. He controlled the final table for virtually the whole time, losing the chip lead only for a few moments before quickly restoring it.

"Maybe the old me would've just got too frustrated and tilted but I just took a deep breath."

"He's, like, the best. Everyone thinks he's the best 2-7 player in the world," Schwartz complimented Becker who kept drawing nutted hands against Schwarz' patted hands on the final day of play.

Some of the wheels and strong eights cost Schwartz several decent pots, but he never let Becker nor George Wolff run away with a leading stack. Schwartz kept grinding and grinding.

With 90-minute levels in play, there was room for everyone to utilize their best skills. Schwartz, however, knew that he and his two final opponents were a special group.

"Everyone played great. I don't think another three players would be able to last that long. That was just the most intense three-handed battle ever."

The deadlock finally broke when Becker fell to a nub and Schwartz peeled a stronger eight on the river, finally allowing for a heads up. And while Wolff looked to be more than prepared to fight, Schwartz soon transitioned into a ground-and-pound mode. Wolff's swan song came when he patted a rough eight while Schwartz hit a better eight after the second draw.

"That was just the most intense three-handed battle ever."

When it was over, Schwartz and his rail burst into excitement at the achievement of a poker career that has been enigmatic, dramatic, and at last emphatically successful. That might be standard for the majority of the first-time winners, but Schwartz hadn't been a typical wristwear hunter. His last WSOP cash had dated back to 2013 until he min-cashed the $10k Dealer's Choice event this year. Tournaments are not his bread and butter and at times, he's shied from the brightest lights.

Tonight, Schwartz seemed at home in the glare of the closest scrutiny, shining like the star he's been heralded as for years before this maiden bracelet win. He admitted that his motivation to win the jewelry was as strong as anyone else's.

In hindsight, Schwartz' victory might be called a comeback story. He was one of the shortest stacks on the stone bubble, putting his last big bet in play after a final draw against Dimitri Holdeew. The bet was uncalled and Schwartz's then turned the odds.

There is no doubt about what else the WSOP has in store for Schwartz. For a high stakes mixed-game player, it would be unthinkable to miss the $50,000 Poker Players Championship.

With a bracelet on his forearm, Schwartz will now surely have high hopes of claiming the Chip Reese Trophy. It is only a few days away so make sure to continue following PokerNews for all the details from the 2019 World Series of Poker. And sign up for PokerGO to watch it all live!