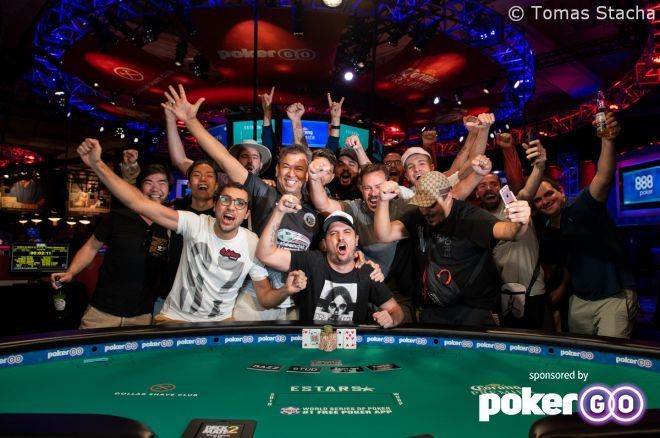 The once raucous Brazilian crowd grew silent as the band of revelers awaited the showdown and then the final card.

He flipped his hand over and shouted something in Brazilian, no doubt calling for a high card as the only way the tournament would continue would be if Jason Stockfish could find a low card to take half of the Omaha pot.

A nine fell and pandemonium ensued. The Brazilians rushed past the rail and mobbed Souza, creating a mass of humanity pulsing, shouting and spilling drinks all over the floor. Their man had done it. Coming in with zero World Series of Poker cashes, he had claimed his first bracelet in a field of 751 in Event #14: $1,500 H.O.R.S.E., winning $207,003.

"It's amazing," Souza said through a translator. "They're the best players from Brazil. I've known them for a long time. We've been playing poker together for more than 13 years. Winning here with them watching, I don't even have words to describe it."

The win did not come easy, and it did not come quickly for Souza, who said he plays for a living. When it came time for the last showdown, heads-up play against Stockfish, the war dragged out through six hours — two late in the night as the calendar turned to Saturday and four more after a noon restart.

Stockfish held the lead for most of the Day 3 portion and Day 4 began with more of the same. Certainly, he came in with the experience edge on the WSOP stage, having already booked a frustrating string of second-place finishes — one in 2016 and two in 2017. Observers sweating the action had to expect he was the favorite to close it out.

Those in the know — the Brazilian poker media — considered Souza to be drawing plenty live, however. According to them, Souza has had plenty of success online and is one of the better mixed-game players from their country.

The match went back and forth, with each player holding at least one large lead. At one point, down to a handful of bets, Souza had his head in his hands as second place loomed.

"It's tough, I lost a lot of chips against a very good opponent heads up," he said. "But, I never lost hope because I knew when I'd be all in I'd have good cards. So, I just played my game and hoped for the best."

To illustrate how large the bets were at the end, Souza was down 6 million to 1.5 just 15 minutes before he won the tournament. When his quads held, the wild celebration kicked off and then Souza stepped away from the crowd and did a quick video call back home, blowing kisses to his family and girlfriend.

It's been a long journey to a bracelet for Souza, who said his love of mixed games began right when he started learning poker. He said he had no materials, he simply watched the top players and then fired up hand replays to try to figure out what they were doing.

He said he hopes to play some satellites for the $10,000 H.O.R.S.E. and the $50,000 Poker Players Championship, the latter representing a dream for him.

After winning his first bracelet, Souza is at least one step closer. And one thing is for sure: if he does make it, he'll have plenty of support on the rail.