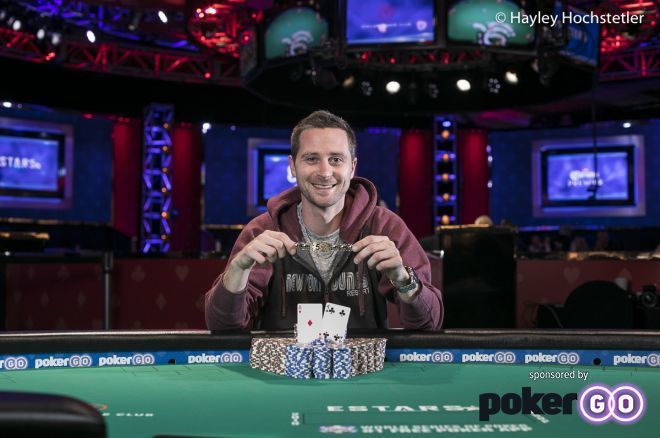 A loud yell echoed through the Amazon Room as soon as the final cards were dealt in his favor. Fox celebrated with both fists pumped sky-high and quickly got swamped by his family. One of the onlookers was Fox' eight-month pregnant partner, who was able to experience her man's crowning achievement through the phone screen held by Fox' dad.

"Every time we get here we all get together and coach and rally each other."

“It’s the most amazing thing," a bewildered Fox said to the assorted media shortly afterward. "I’m about to have a baby next month and I’m only here to play three tournaments. This is the third one and I just won it. It’s unbelievable."

The family man was flanked by a jubilant rail consisting of his dad, brother, and cousin, who are all here to play in the WSOP.

“We all come out here every summer together and make it our family thing. My dad [Yosef Fox] took 100th in the Main Event in 2015, I took 27th last year. Every time we get here we all get together and coach and rally each other. I don’t know how I’d do without the rail."

One thing is for sure: with the shiny piece of hardware around his wrist, it’s the young Fox who holds the bragging rights within the family now.

“They’re gonna hear about it. All year,” he laughed.

Fox is no stranger to running deep at the WSOP. Last year, he found himself on the brink to poker immortality making it all the way to the final hand of Day 6 of the Main Event before bowing out in 27th place ($282,630). This time, he was able to close it out and has a WSOP gold bracelet to account for it.

“I thought that was the best run ever,” Fox said about his 27th place finish in the Main. The 32-year old from Long Beach, California took some time off after a career-altering run to reflect on the experience and learn from it. In fact, this is Fox's first cash since the 2018 WSOP Main Event, and he eclipsed last year's accomplishment with an even bigger six-figure score. The slow-paced nature of the Main Event and octane-fueled blind increase in the event couldn't be more different in nature.

“It’s totally the opposite of the Main Event where you can sit and be really patient,” Fox compared the turbo-ish nature of the Double Stack No-Limit Hold'em to the Big One. “For this one, you gotta be running good pretty much the whole time and weathering the bad beats. But the structure with more chips starting out, and the faster blinds, it seemed all to work out for me this time."

Runner-up to Fox was Jay Gangaiah, who received $259,834 for finishing in second place. Short stacked, Gangaiah laddered himself quite nicely after Fox clashed multiple times with 2014 bracelet winner Jeffrey Smith. Pivotal towards Fox' eventual victory was a monster cooler during three-handed play where Fox held ace-queen against aces.

“I played a lot with Jeff and he was really good. Probably the best player in the rest of the field. We got into a raising war there and he woke up with aces. I flopped a queen and knew I had a little bit of life there. And then the queen on the turn was just the magic. I knew after that queen, I had to win the tournament. That was the second time I got lucky in the tournament. Other than that, it was just a great run."

"Absolutely, without a doubt. It’s the best achievement in poker.”

Shortly after the miraculous escape, Fox eliminated his adversary after both found big hands again and got involved in another raising war. It was Fox’ ace-king suited catching an ace to break Smith’s pocket queens, eliminate him in third place, and end his shot at a second bracelet. While fortune was on Fox' side, the champion had nothing but kind words to say about Smith afterward.

“It was bittersweet to see Jeff go out in third. I thought he was a really strong player. He made a move on me yesterday and I gave him a lot of respect of it,” Fox complimented.

With his strongest opponent gone, Fox commenced the heads-up with Gangaiah sporting a nearly 10:1 lead. However, Gangaiah found some life after doubling up twice, bolstering his and his rail's spirit. Ultimately, the comeback would be shortlived, as Fox was able to turn it around in thirty minutes. After wearing Gangaiah down to below fifteen bigs, he won the third all-in with ace-four versus deuces for the crowning moment of his poker career.

With the unexpected windfall of more than $400K, the soon-to-be father suddenly has a lot of cash to splurge around.

“I’m gonna buy a lot of baby diapers,” he chuckled. “Probably a present for my wife, [other than that] keep living nice and playing poker. I’ve been playing for twelve years, and to win a bracelet at 32 is an absolute dream come through."

The crowning moment of his career? "Absolutely, without a doubt. It’s the best achievement in poker.”

How the Odds in Craps Are Calculated

Blackjack Mistakes: Here's Why You Lose Every Game You Play