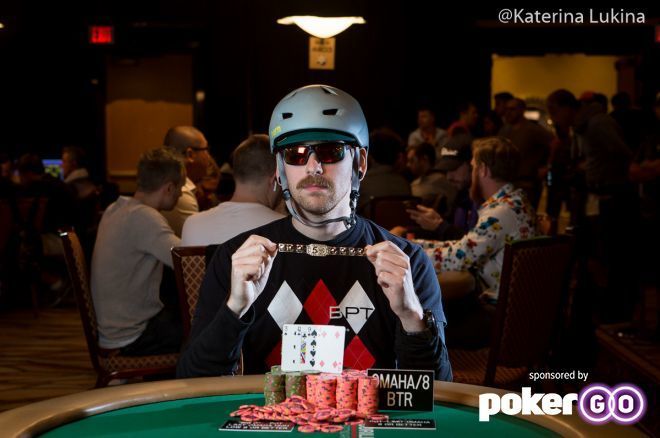 When Anatolii Zyrin lost a 4-to-1 lead heads up for a bracelet three weeks ago, he wouldn't imagine getting another serious shot at a title this summer. And if there was an event in which he'd expect it the least, the 717-entry $1,500 Omaha Mix would be a strong candidate.

He hadn't played limit Omaha in his life. He'd played Big O only once and pot-limit Omaha hi-lo just a handful of times.

Somehow, Zyrin was still able to come out on top to win his first career-bracelet and $199,838. To do so, he had to deny none other than Yueqi Zhu to claim the throne from the defending champion.

"This is something unbelievable," Zyrin said with a wide smile on his face.

His road to victory was about as wild as it gets.

"On the first day, I hit a one-outer for my life," he admitted.

As if that wasn't enough, Zyrin was ready to deliver more comebacks from his title-winning campaign, revealing that he once wanted to muck his hand on Day 2 before asking the dealer to reopen it so that he could take a photo. It was only then when he realized he had won the high.

"I played poorly in the first two levels because I didn't know these situations as well as my opponents."

As Zyrin proved on the final day, his performance was as close to destiny as possible in this earthly life. While he returned for the final day as the chip leader with four players left, he hit very sharp skids.

"I played poorly in the first two levels because I didn't know these situations as well as my opponents," Zyrin admitted.

Zyrin suddenly found himself dead last with just under one big bet left, but the variance would flip back in his favor. A stroke of fortune helped Zyrin vault back over the average stack within a few hands.

Zyrin gained some ground back and then eliminated [Removed:146] in fourth and James Van Alstyne in third place. That propelled him to a heads-up match against Zhu.

For many, playing Zhu could be an unwelcome challenge, considering his remarkable results in the history of the mixed Omaha event; Zhu made it to three final tables of the tournament in no more than three years of its running.

There were also the memories from Zyrin's close call in the $1,500 no-limit hold'em shootout from early June. Zyrin had a giant lead with only one player between him and the bracelet, but he couldn't deliver that time.

"In the first heads up, my opponent was, I think, perfect. Maybe he had good cards, maybe good cards and good skill. He destroyed me," Zyrin said.

This time, he claimed to have felt comfortable. Zyrin said that he plays a lot of hold'em and regular pot-limit Omaha heads ups online, and he observed some patterns in Zhu's play that could be exploited.

While Zyrin looked for redemption for the shootout loss, Zhu had a strong incentive of his own. Keeping an unbeaten record for two straight years is a rarity in any poker tournament. Adam Friedman accomplished that in the $10k Dealer's Choice, which has arguably a tougher field, but also seven times smaller field.

"My mom thinks I'm a gambler. So maybe this win will change her mind."

A hand that pushed Zyrin close to the victory came in Omaha hi-lo when both players rivered a backdoor flush. Zhu had the second-nut hearts but Zyrin squeezed the ace-seven of hearts, leaving Zhu on a nub.

The match was over shortly thereafter as Zhu couldn't recover from the vast damage done to his stack. After finishing sixth in 2017 and winning in 2018, Zhu had to settle for the silver medal this time.

The debut WSOP triumph for Zyrin might help him break down one particular barrier. While he's played poker professionally for 10 years, he still hasn't been able to convince his parents about the legitimacy of his accomplishments.

"My mom thinks I'm a gambler. So maybe this win will change her mind. I'm not sure, but I hope," Zyrin said before adding: "I would like to dedicate the victory to my parents."

While he's yet to be praised for his poker skills in his family, Zyrin can't complain about support from elsewhere.

"We have a big community in Russia, a lot of people follow me as I stream online."

Only time will tell if Zyrin will be able to add two VIP fans to that group.