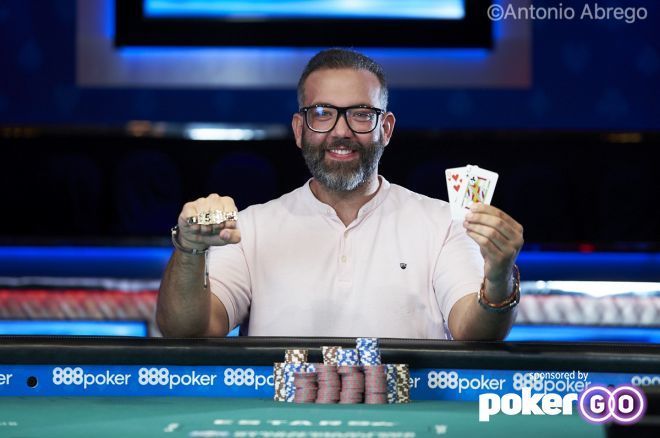 "I ran really good: I never lost an all-in. I felt comfortable, felt confident [and] didn’t see myself as an underdog."

Professional poker player Soriano, no stranger to the WSOP having finished 197th in the Main Event last year (a Day 5 run), said of his win, “It feels amazing. I started leading with ten left. I ran really good: I never lost an all-in. I felt comfortable, felt confident [and] didn’t see myself as an underdog.”

Soriano’s experience and assurance contributed to his win, but he noted that with such fierce opposition, “It came down to the luck of the all-ins.”

Ten players returned for an originally unscheduled third day’s play as the interest in an $800 buy-in event awarding a total prizepool of $2,676,408 was understandably high.

With the elimination in tenth ($31,933) of Gustavo Hess, the unofficial nine-handed final table was soon set, Soriano and Canadian Samuel Gagnon nearly neck and neck for the chip lead. Gagnon was pulled back down to the middle of the counts quickly, however, as he doubled Underwood (pocket kings overcoming pocket tens) to keep the deepstack phenomenon of the year in the running for a bracelet.

When Soriano busted Jeff Tahler in ninth ($31,933), having flopped a straight in the big blind with seven-three suited and Tahler drawing to a non-appearing nut flush, he cemented his place at the top of the chip counts and wielded his stack for maximum pressure on his opponents.

It was not all one-way traffic, however. Nick Blackburn, adorned in “Hillbilly Poker” gear, had a good level, taking chips in and out of position. His scooping of pots announced to the crowd with an idiosyncratic crowing noise and the exclamation, “Hillbilly wins another one!”

With Blackburn ascendant, Ori Hasson had dropped to ten big blinds, finding a spot to three-bet all-in with ace-ten over a preflop raise from Underwood. Behind him lurked Joao Valli with ace-queen, however, and with no draw out on the cards, the young Israeli player busted in eight ($41,300). Valli’s vocal Brazilian rail cheered their man, as they had done from the start of play today, as his first WSOP cash turned into the largest payday of his tournament career thus far.

“It came down to the luck of the all-ins.”

Daniele D’Angelo busted in seventh place ($53,958) as, despite calling for his “one time,” he failed to spike, finding himself all in with king-queen versus the ace-queen of Soriano.

Samuel Gagnon, too, was eliminated by Soriano, his six big blind shove – with pocket aces, no less - given a spin by the chip leader with five four of clubs. Soriano flopped the nut straight, improving to a flush on the river, and Gagnon collected $70,813 for 6th place.

Five-handed, Valli, who had been picking spots to move all-in uncalled or three-bet players off pots, finally ran into a willing caller in the form of Lehavot. The latter mentioned jacks disposed of Valli's ace-eight to hand him a payout ticket worth $93,866. This set Lehavot on what seemed a plausible path towards a second WSOP bracelet (his first awarded in 2011 for his victory in the $10,000 Pot Limit Hold’em Championship); even when he dropped in chips, he soon found a double through the courtesy of Blackburn.

Four-handed it was Underwood in the driving seat, action-wise, overtaking both Lehavot and Soriano to secure the chip lead. A significant boost to his stack came via his elimination of Blackburn (fourth for $125,432) in a massive pot in which he flopped top pair top kicker when Blackburn decided to pull the trigger and check-raise all in with bottom pair. His reign was relatively short-lived, however, as he doubled Lehavot and found himself on the wrong side of several small pots with the blinds a stratospheric 1,000,000/2,000,000.

Soriano’s fabled all-in run-good continued when he put Underwood to the test, setting him in from the small blind when it folded to him. Underwood called and despite starting the hand ahead, with ace-nine of spades to Soriano’s king-four of diamonds, didn’t end it that way, as his opponent flopped a pair of fours and stayed ahead despite a spade flush sweat. Having already finished fourth for $135,959 in Event #9: $600 No-Limit Hold'em Deepstack and fifth for $74,435 in Event #37: $800 No-Limit Hold'em Deepstack this year alone, should he continue his trend, Underwood is on schedule for runner-up next, then a bracelet of his own.

“I’ll play more events until the summer’s gone. I hope to win the Main Event next!”

Heads up play lasted just two hands. Both went Soriano’s way, the final hand in dramatic ace-cracking fashion. Amir Lehavot just flat called Soriano’s preflop raise with two black aces and stacks went in on a ten-high flop, Soriano holding jack-ten offsuit. A tournament-deciding third ten appeared for Soriano, and abruptly, this marathon Deepstack had come to an end, Lehavot collecting $229,410 for the runner up spot and Soriano his first bracelet and $371,203.

Of the crucial final hand, Soriano said, “It was surprising that he had that big of a hand. Top pair heads up is pretty strong, it was really amazing.”

Although a professional player, Soriano said that he had recently taken six or seven months off, deciding to return to the felt at the WSOP.

“I was ready to win,” he said. “I’ll play more events until the summer’s gone. I hope to win the Main Event next!”

Want to watch the WSOP Live? Sign up for PokerGO!