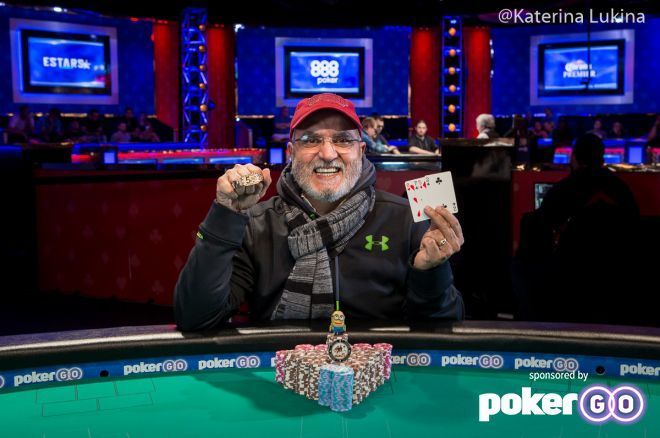 The 50th Annual World Series of Poker has given another prestigious WSOP gold bracelet away to a new champion in Luis Zedan, who on Saturday afternoon shipped Event #30: $1,000 Pot-Limit Omaha for an immense $236,673.

Zedan was the last man standing of the 1,526 runners to take part in the record-breaking field for this event. He jumped into the top spot early on Day 2 and showed no fear of playing massive pots at any point thereafter. During the third day, he dropped towards the bottom of the counts, but didn't tilt and quickly built his stack back up, bouncing back up to a substantial chip lead when he headed into the final day.

“There is nothing like playing poker with friends, that’s my saying."

"At the end of yesterday I felt very good and this morning I came in focused. I woke up at 9 a.m. and went to the spa, then had something to eat. This is my fourth final table and I had a very deep run in August. At that time I was very tense, I wanted to get everything in."

The Miami, Florida native claims that he felt more relaxed today, and he was always the most outgoing and positive person at every table he played throughout the tournament. He plans on donating 35% of his earnings after taxes to a friend's charity in Kenya.

“There is nothing like playing poker with friends, that’s my saying," he said. "I was smiling and having fun. That’s what poker should be, the idea is to make the game fun for the whole poker community."

When asked if he was excited about winning a bracelet Zedan replied: "It's been my dream. I started to play poker seriously back in 2009 and after watching Moneymaker win in 2003, I believed that anybody could win. I've been coming here since 2011 or 2012. It's been my dream and I've gotten very deep in tournaments three times. Finally, I've gotten first place. I'm very, very happy!"

Erik Wilcke was the first to fall at the final table of nine, when he flopped bottom two pair with the danglers to his aces, but Zedan's top pair found a second pair on the turn to leave Wilcke headed out the door first for $18,188 and a ninth-place finish. It was Thida Lin's turn to get in on the executioner's role next when Stanislav Parkhomenko's aces got cracked by Lin's full house with {a-Clubs}{7-Spades}{6-Diamonds}{5-Clubs} making fives full of sevens by the river. Parkhomenko takes $23,654 for his eighth-place finish back to Bulgaria.

Christopher Conrad was next to go in seventh, finding top pair on the flop, but Zedan's hot streak continued, as he flopped a set and rivered a flush to best Conrad, who managed to hit a runner-runner straight of his own. Conrad's second PLO cash of the series was good for $31,130. Gregory Donatelli would be the last elimination of Day 3 before the field returned for an extra day of play. A cooler scenario saw Donatelli flop a set of jacks and a gutshot, but Zedan held top set of aces and a blocker to Donatelli's straight, and no relief came for Donatelli, who settled for sixth-place and $41,453 in prize money.

The final five players returned on Day 4, and the action commenced immediately as Ryan Goindoo of Trinidad and Tobago was the first to fall, the result of his aces being cracked by Lin's full house. Goindoo took home $55,845 for fifth-place. Ryan Robinson would be the next to fall victim to Zedan, as Robinson's flopped nut straight went down in flames to the flopped set of Zedan, when Zedan filled up on the turn and Robinson couldn't hit his overpair to survive, giving Robinson fourth-place and $76,101.

Sam Razavi started Day 4 as the short stack, and managed to ladder his way up to third, before finally succumbing to Zedan, when Razavi got his last few chips in with three kings and a seven preflop. Zedan made two pair by the turn, and Razavi couldn't catch up, meaning the British pro was rewarded with $104,888 for his third-place performance.

Heads-up play looked to be a lengthy affair, with Lin holding around 40 big blinds at the start to Zedan's whopping 150, but the last hand came just a few minutes in. Lin held two pair and an open-ended straight draw on the turn and got her last three million or so chips in, but Zedan had turned the nut straight, and Lin was runner-up for $146,196 when she failed to fill up on the river.