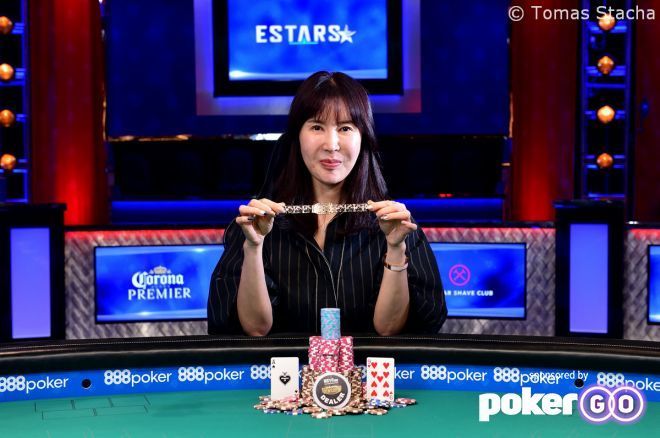 After 157 hands on the final day of the 2019 World Series of Poker Event #47: $1,000/$10,000 Ladies No-Limit Hold’em Championship, South Korea’s Jiyoung Kim won her first gold WSOP gold bracelet and a first-place prize of $167,308 by defeating Nancy Matson heads-up. The event attracted 968 entries due to a new format with an increased starting stack of 20,000 chips and the fact that players could reenter during the first eight levels of play.

It marked Kim’s second time ever cashing a WSOP event but the latest result easily surpassed the $580 cash she had during a WSOP Circuit event in 2016 according to The Hendon Mob. Kim had recorded 17 different cashes before the win with her previous highest cash ever being $21,939 during an event in the Philippines in 2016.

The cash that comes with the bracelet is a big thing but Kim plans to give it all away: “I’m giving it to my mom. All of it. She is always worried about me going overseas to play poker tournaments. I feel for her that’s why I will give it to her.”

When the players returned at noon local time on Sunday all six players were guaranteed at least $27,643 but they were all aiming to make their career-best cashes. Unfortunately, that wasn’t meant to be for everyone. The well-liked and friendly Lexy Gavin was arguably the most recognizable name in the line-up. She got her last chips in from the small blind with pocket sixes after a raise by Matson, who held ace-queen. Matson flopped top two pair and Gavin couldn’t find a six on the turn nor the river to stay alive.

Lyly Vo was next to go in fifth place for $37,564 when her last six big blinds went in with seven-six. She was up against Kim’s ace-seven. The ace-four-trey flop gave Kim top pair but there was a glimmer of hope for Vo as she picked up a gutshot to a straight draw. The six on the turn gave Vo some more outs to stay alive but she bricked the river to be sent to the payout desk. France’s Sandrine Phan was the next one to be named the short stack after Vo’s elimination but she managed to double up with seven-five when she turned two pair.

The Day 2 and 3 chip leader, Tu Dao was bleeding chips throughout the day as none of the ladies held back with their aggressive plays. Dao ended up jamming with ace-jack suited for 18 big blinds after Matson had raised. Phan over-shoved with the bigger stack and Matson quickly got out of their way. Phan’s pocket jacks held up for Dao to be sent away in fourth place for $52,007.

Three-handed play would take an hour before the curtains finally fell on Phan. Her king-nine couldn’t beat the ace-deuce of Kim. Phan’s first visit to the 50th Annual WSOP can immediately be called a success as she collected $72,821 for her efforts which means she’s got a new personal best in regards to live tournament cashes. Heads-up play started with Kim holding a commanding lead which she never relinquished.

Matson managed to find a double-up once with ace-five against Kim’s king-queen but in the final hand of the day, she pushed all her chips in with king-eight and was called by Kim who held ace-nine. They both walked to their own rails to watch the runout of the seven-seven-queen-ten-trey board. Kim’s own rail kept chanting for a deuce but the trey was just as good as Kim celebrated with them when the final cards were dealt.

"I’ve played the Asian Circuit and the players here were way better. I think I got luckier than them. That’s why I’m here right now.”

They hugged and congratulated each other on their results. Kim laid claim to the second-ever bracelet for South Korea after Sean Yu won the first back in 2017.

“I feel like I’m dreaming. It’s a dream come true for me,” Kim said after her victory. “It’s my third year here at the WSOP. I’ve never cashed before (in Las Vegas). I own a small coffee shop in South Korea and I’m also a poker player. I’ve been playing live tournaments for about four years. I’m a semi-pro. I play part-time.”

Kim added: “I said I would take it slow going into the final table even though there were female players. This is the home of poker so I didn’t want to underestimate the players. I’ve played the Asian Circuit and the players here were way better. I think I got luckier than them. That’s why I’m here right now.”

Kim played the BIG 50 and the Millionaire Maker earlier this summer and made her third event her lucky one. She isn’t sure if she’ll play the Main Event yet: “I might try the satellites first and go from there."