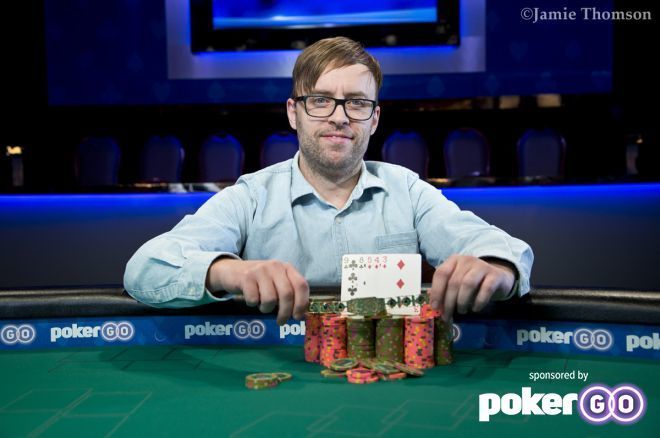 Chants of “Aussie, Aussie, Aussie!” filled the corner of the Amazon room in the early morning hours as Event #33: $1,500 Limit 2-7 Lowball Triple Draw came to a conclusion after almost ten hour-long levels. The 35-year-old mixed game specialist Robert Campbell has become the latest winner during the 50th World Series of Poker at the Rio All-Suite Hotel and Casino, and he did so after an epic heads-up battle for the bracelet.

The event saw a field of 467 entries take part, creating a prize pool of $630,450 and Campbell took home the top prize of $144,027, becoming the 20th Australian player to claim at least one WSOP bracelet. Campbell denied three-time WSOP bracelet winner David “Gunslinger” Bach a fourth title in claiming his first one. Calm and focused during the entire final table, all the pressure fell off the Melbournian and he shot out of his chair in excitement after the final hand to celebrate with his rail, the emotion he'd held at bay for the duration of the final table pouring out of him in a celebration of his momentous achievement.

Among those to embrace him were Warwick Mirzikinian, Gary Benson, James Obst, Joe Hachem and Ash Gupta. Even Jeff Lisandro came over during his breaks in the $10,000 Dealer's Choice Championship to check on the intense heads-up duel.

It was far from an easy ride for the Aussie despite coming into the seven-handed final table with a comfortable lead, which he immediately remarked on during the interview after his victory.

“I had that feeling of dread when I had a big chip stack at the start of the final table and [then] fell back into the pack. But straight away after dinner, three people turbo busted, I was like I 'Go cash game mode and see what happens'. And then, Bleznick caught bad cards and he was finished.”

The duel for the gold bracelet was an endurance challenge against three-time WSOP bracelet winner Bach, who put up a fierce fight in his bid to add another title to his already-impressive resume. Both men held commanding leads at different points of the exchange and Campbell admitted adjusting to the playing style of his opponent, which proved to be a golden decision.

“He is quite an unorthodox player, you have to do a few things slightly differently against him.”

The WSOP bracelet win is a dream come true for the 35-year-old from Melbourne and CEO of Neon Esports who has had several cashes in various mixed games to his name. His first WSOP score dates back to 2013 on home soil during the World Series Of Poker Asia Pacific in his home town of Melbourne and since then Campbell came close to victory several times with 16 WSOP cashes for nearly $600,000. Until tonight, the outright win had eluded him.

Just a few days ago, one of those close calls took place right here in Las Vegas as he finished 5th in Event #18: $10,000 Omaha Hi-Lo 8 or Better and also cashed in the $1,500 Dealers Choice event this series. Those two deep runs didn't result in a confidence boost for the Aussie, however.

“If anything, it was rather a 'No, not again...' [thought], you know. I was just so excited to be here again. But I really just wanted to try my best. I had a really good sleep and then on the [dinner] break I had an hour sleep. I felt like that was a good idea.”

Campbell returned very focused and withstood the hot streak of Jared Bleznick, who pulled into a commanding lead, yet had to settle for third place only just one hour later. Defending champion Hanh Tran came close to a repeat victory, but eventually fell short in seventh place. Other notables that ran out of chips before the final table was set were Daniel Strelitz, Carol Fuchs, Frankie O'Dell and Benny Glaser.

The day got off to a hot start with four casualties within the first half an hour and among others, 2019 WSOP bracelet winner Daniel Strelitz saw his hopes of a second victory vanish when his low draw bricked off against the ninety-six of Jared Bleznick. One hour later, the field was already reduced to the final 10 players on two five-handed tables as Carol Fuchs, Frankie O'Dell and Michael Noori all departed.

Benny Glaser, who won this very event in 2015, had to settle for 10th place this time. Having lost several pots in quick succession, among others against a wheel of defending champion Hanh Tran, the Brit ended up all in before the first draw. Glaser made an eighty-seven, but Jesse Hampton held the superior hand with a seventy-six.

Robert Campbell and Kyle Miaso dominated their tables on the way to the seven-handed final, however, Miaso was knocked back into the middle of the pack by the time Steven Tabb and Hope Williams were eliminated in 9th and 8th place respectively.

The final table started with a bang when Hampton hit a wheel to win a big pot off Tran, and the title defense of the Austrian came apart soon after. Down to fewer than one big bet, he was unable to mount a spectacular comeback this time and his eighty-seven was no good.

“I have never seen a final table where nobody goes broke for such a long time,” Jared Bleznick admitted when the field was down to the final six and indeed the chips were passed back and forth for quite some time. Aptly dressed in a winter jacket and wooly hat on the feature table, Bleznick went on a heater after dinner and took a commanding lead while Aron Dermer, Jesse Hampton, and Kyle Miaso were sent to the rail within half an hour.

But the prime position of Bleznick turned to nothing as he “caught bad cards” and went from chip leader to out in third place. The heads-up duel between Campbell and Bach lasted for more than two hours and eventually, the Aussie had grinded down his opponent to just two big bets. Bach's eighty-seven draw missed and Campbell held up with a ninety-eight to embrace his rail.

The $10,000 Limit 2-7 Lowball Triple Draw Championship is just a few days away and Campbell will very likely try and add a second bracelet to his collection. Tune back in then, as PokerNews will be there to provide all the action throughout the summer during the 50th edition of the World Series of Poker. Watch the final table of many event, live via PokerGO!