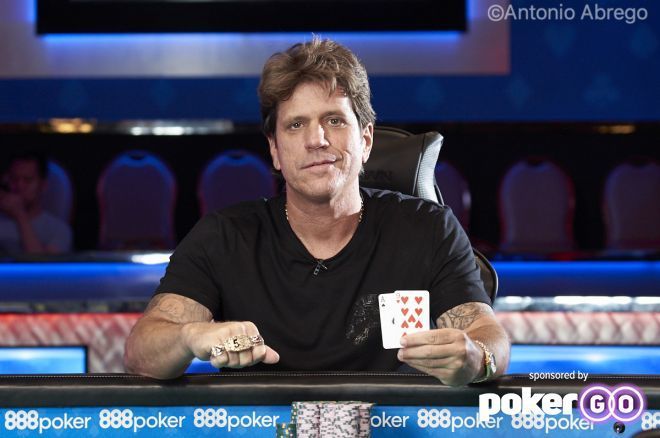 The first bracelet of the 50th Annual World Series of Poker has been awarded!

“It kind of gets the monkey off my back. Now I can play poker without having that on my mind.”

“It kind of gets the monkey off my back. Now I can play poker without having that on my mind,” Green said after the win. “I tend to do well when I play pro-heavy fields... I know most of the guys who play $10ks are pretty good players. In a turbo, though, there’s a lot of flipping too, not a lot of post-flop poker. Still, a win’s a win; it’s hard to win a poker tournament.”

The win came three months after Green relocated from Texas to Las Vegas, a fact he credits to his early success.

“I’ve been coming out here for at least 100 days a year for probably 20 years, and it gets expensive,” Green explained. “I figured; why not buy a place and not have the pressure of having to pay for [hotel] rooms. Plus, now homecourt advantage, it looks like it’s working. Sleeping in my own bed and all that, I thought that might be an advantage this summer.”

Green, who started playing poker in 1984 after learning the game from his father, had more than $3 million in lifetime earnings prior to his victory, which included a career-high $1,117,923 for finishing fifth in the 2016 $111,111 High Roller for One Drop.

The final six players returned to action on Thursday in what was the first live streamed event of the 2019 WSOP at PokerGO.

On just the ninth hand of play, six-time bracelet winner Daniel Negreanu moved all in from the button holding ace-ten and received a call from Loren Klein, who had queen-jack in the big blind. Klein turned a queen, and that was all she wrote for Negreanu.

Ten hands later, Ping Liu followed him out the door, also courtesy of Klein. It happened when Liu jammed the small blind with jack-ten suited only to have Klein wake up with ace-ten in the big. Liu actually flopped the nut king-high straight, but a jack on the turn gave Klein Broadway. Liu took home $71,614 for his fifth-place finish.

"Still, a win’s a win; it’s hard to win a poker tournament."

Loren Klein’s run came to an end in fourth place after getting it in preflop holding ace-nine against Asher Conniff’s ace-queen suited.

Not long after, Conniff, who started the final table with the chip lead, lost with ace-nine to Brian Green’s king-queen all in preflop after a king appeared on the flop. That allowed Green to take a more than 2:1 chip lead into heads-up play against Ali Imsirovic.

The latter managed an early double to even the stacks, and then the duo played the final hand. Imsirovic got his stack all in preflop holding two reds kings and was up against Green’s ace-nine offsuit. Imsirovic held through both the nine-high flop and turn, but then another nine spiked the river to seal the deal for Green giving him trips. Imsirovic, one of the hottest players in poker over the past couple of years, was denied his first bracelet but did take home $213,644 in prize money.

Choose Your OWN Bonus at Mongoose Casino: What Will It Be?

Football Slots to Play Ahead of the Champions League Final