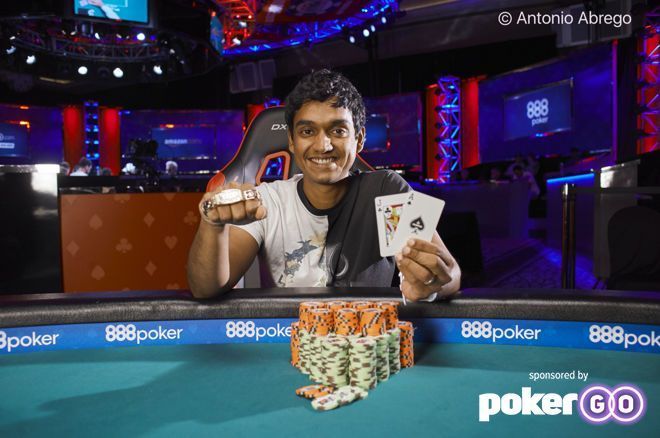 It took just over 11 hours for a champion to be crowned in Event #38: WSOP.com ONLINE No-Limit Hold'em Knockout Bounty and when the dust settled, it was a familiar face in Upeshka "gomezhamburg" De Silva who emerged as the victor (lead photo from his 2017 bracelet win in the $3,000 Shootout.)

The title of victor earned De Silva a first place prize of $98,262.72. The Sri Lankan-born native of Texas topped a field of 1,224 players in the only online knockout event of the summer, generating a total prize pool of $673,200. Of that, $550,800 went to the regular prize pool and $122,400 to the bounty prize pool. In addition to winning the tournament, De Silva also topped the field with a whopping eighteen bounties at $100 each, bringing his total winnings to $100,062.72 for the tournament.

De Silva was seen on the leaderboard from the final 100 players and was second in chips in the tournament at both the final two and final three tables stages. He entered the final table fourth in chips, narrowly behind "Pretabotones" with around one-and-a-half times the average stack at the time.

When the final table was reached, "B3ndTheKnee", "p.bateman", "johnsonck", and "davidas777" all found themselves with under twelve big blinds in their stack.

It wasn't long before "BoatyBoatz" (9th place) and "B3ndTheKnee" (eight place) were eliminated. After about ten more minutes of play, "johnsonck" (seventh place) joined the rail when De Silva's ace-king held versus ace-ten all in preflop.

Six-handed play lasted for about two minutes before "p.bateman" was eliminated in sixth place and De Silva found himself with 7.1 million chips, the chip leader with five left.

Three-handed play began with De Silva second in chips behind eventual runner-up David "dave419" Nodes, whose stack was just shy of 15 million. Third in chips was 'davidas777', who entered the final table ninth in chips.

De Silva eliminated "davidas777" in an all-in preflop situation for fewer than ten big blinds when his queen-nine suited hit a backdoor flush to beat the pair of sevens of 'davidas777'.

When heads-up play began, De Silva had a narrow chip lead but saw Nodes pull away to a two-to-one chip advantage after about fifteen minutes of play. The two then got all in preflop, with Da Silva having pocket fives to the ace-ten of Nodes. The flop brought three hearts, with Nodes having the ace of hearts. However, the turn and river were both clean and the players' stacks were all of a sudden reversed.

From there, De Silva continued to grind Nodes down and ultimately won the tournament when his pocket tens hit a ten in an all-in preflop situation, giving him a set and securing the victory.

With six more online events on the schedule as well as a full slate live at the Rio All-Suite Hotel and Casino, be sure to catch the rest of the action for the 2019 World Series of Poker at PokerNews. For live final tables, PokerGO is the place to be to watch it live! Sign up now for $10 a month, or $99 for the year.