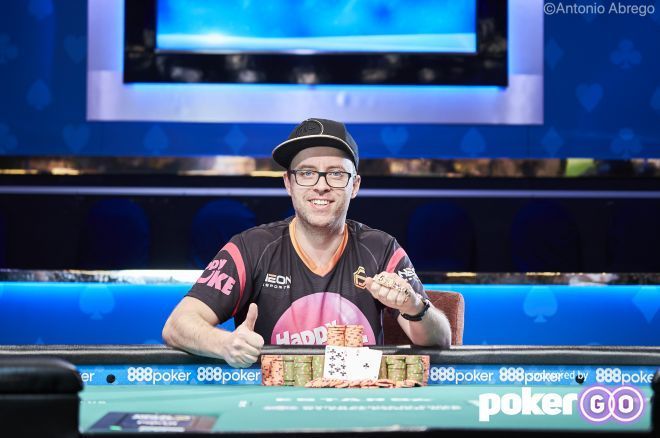 "I was really excited to come to Vegas, much more excited than I had been in the past."

Today, Campbell becomes the first player at the 2019 World Series of Poker to collect multiple bracelets after he bested the 151-player field to win Event #67: $10,000 Stud Hi-Lo Championship while also taking the top spot in the WSOP Player of the Year race.

The Stud Hi-Lo Championship has a storied history at the WSOP. Although it has seen numerous buy-in amounts over the years, it has been $10,000 for the majority of the years since moving from Binions.

Following a location change that saw the final players relocate to the mini-feature table, Steven Wolansky was eliminated in eighth-place when he failed to improve on his split threes and straight draw as Campbell made a wheel on seventh.

Campbell used this momentum to climb into the outright chip lead as Russian Andrey Zhigalov was eliminated in seventh place. Zhigalov held a combo draw that only improved into a pair of sevens while Yueqi Zhu’s buried jacks held true. Qinghai Pan exited in sixth-place when his wheel draw failed to spike against Mike Matusow’s trip sevens.

Ryan Hughes lost a sizeable pot to Zhu and was eliminated shortly after in fifth-place when he was all in with a wheel draw against Matusow and Mike Wattel and could only improve to jacks up against Wattel’s kings up.

Following the elimination of Hughes, a gigantic pot played out that saw Mike Matusow get scooped by both Zhu and Campbell. Campbell made an ace-high flush on seventh while Zhu held the low. Matusow couldn’t believe his luck as he held trip eights with flush blockers against Campbell. Clearly the crowd favorite and chasing his fifth WSOP bracelet, Matusow found a double, but his elimination in fourth-place would occur shortly after when he was all in with open sevens against Zhu’s split queens. Both players improved on sixth street to two pair, and when Matusow failed to fill up on seventh, his quest for WSOP bracelet number five was halted.

"As long as they put my picture directly over Jeff Lisandro's, it will be really good."

Mike Wattel fell in third-place when both he and Campbell held a pair of queens. Campbell improved to queens and tens, and when Wattel was unable to improve himself, he left the Stud Hi-Lo Championship down to the final two players.

Campbell took the chip lead into heads-up play, and immediately extended it to a two-to-one advantage when he made a wheel against Zhu on one of the first hands.

From there, Campbell put on a display of dominance as he won the majority of pots against Zhu and slowly chipped away furthering the gap between the two.

In the heads-up clinching pot, Campbell made both an ace-high flush and a seven-low to scoop Zhu. Zhu secured a double up after that, but his elimination in second-place occurred shortly after when he started with buried tens against Campbell’s split aces when all the money went in. Zhu improved to queens up on fifth, but Campbell made a straight on seventh to claim the Stud Hi-Lo Championship title.

Having finished runner-up in the $1,500 Omaha Mix just a couple of days ago a year after winning the event, another second place for Yueqi Zhu. This time silver was worth $238,420.

“More than pure. Whatever that next phase is after pure. It was really sick. I felt like 'Holy f***ing s**t man, he just got barbecued, that poor man.' It was outrageous. Even when I thought I lost, I won. That's how sick I ran.”

After winning his first WSOP bracelet just over two weeks ago, Campbell makes it a brace here at the 2019 WSOP. To go along with Campbell’s two WSOP bracelets, he has also amassed a total of nine cashes, and four final tables on his way to sitting on top of the WSOP Player of the Year race with 3079.31 points ahead of Dan Zack (2,920.76 points) and Phillip Hui (2,830.68 points).

“As long as they put my picture directly over Jeff Lisandro's, it will be really good,” said Campbell about potentially being the Player of the Year. “That’s what I'd want to be done. Just straight over the top.”

Congratulations to Robert Campbell on winning his second WSOP bracelet this year and taking the current lead in the WSOP Player of the Year race.

Stay tuned right here to PokerNews as we continue to provide live coverage of all the events from the 2019 World Series of Poker. Want to watch WSOP Final Tables live? Sign up for PokerGO!