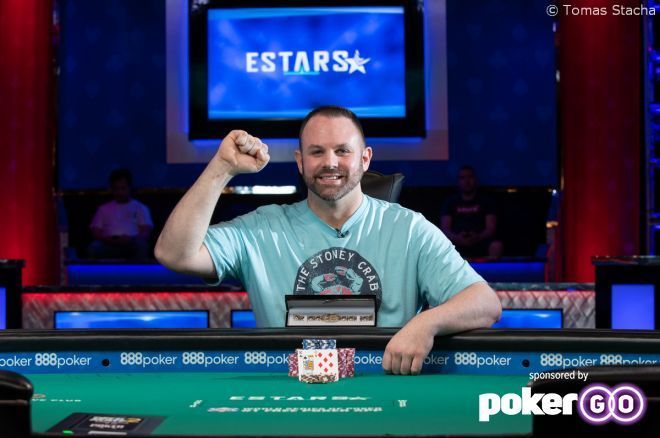 Nicholas Haynes, a Michigan born, Florida raised dealer at Aria for the last year and a half, navigated a field of 686 players to take down Event #1: $500 Casino Employees Event. Haynes took home $62,345 and his first WSOP gold bracelet after defeating WSOP Media Director Isaac Hanson in heads-up play.

"There's a lot of incredible players. I watch them and just pick up little bits here and there."

Haynes, who was overcome with emotion after receiving his gold bracelet, described his poker playing experience humbly.

“Definitely recreational. I wouldn’t ever call myself any kind of pro or anything like that. I play a lot in spurts. I traveled for a year and a half playing in major tournaments. I turned out ok, nothing great. I’ve had a couple of cashes throughout the years, but nothing monstrous like this. This is the biggest cash, for sure.

"I’ve had a couple of cashes throughout the years, but nothing monstrous like this. This is the biggest cash, for sure."

Hanson, who usually works on the other side of the felt with the WSOP, was still in good spirits after coming one spot shy of a bracelet of his own.

"It was crazy; I’ve seen it four or five hundred times now, but I didn’t think I’d ever be there. It just never ran across my mind that this would even be a possibility, so it was pretty cool."

Hanson had one of the more raucous rails at the final table. "It was probably the best part of the whole experience, just seeing all the texts coming, and everyone coming here. It was just really cool to have everyone cheer me on."

Hanson isn't planning on quitting his day job any time soon, however: "I probably will work in a few hours. I’d rather just get back to it, I enjoy what I do. I don’t want to go home and sit around and do nothing, because that’s what I would end up doing."

The final six players returned to action Friday to battle out for the $62,345 top prize and the WSOP gold bracelet.

The first hand of the final table provided the first elimination, as Fallsview Casino dealer Jeffrey Fast, who started the final table as the short stack, got his last chips in with king-five of hearts. Isaac Hanson called with queen-nine of hearts and found a nine on the flop to direct Fast to the rail.

PokerNews Live Reporter Adam Lamers was the next to fall when he jammed with king-queen, and Jorge Ruiz woke up with ace-jack suited behind him and put him at risk. Lamers and his supportive rail called for a king to help pull him in front, but an eight-high board left Lamers out the door in fifth-place for $13,441.

Jesse Kertland, a Casino Carribean pit dealer, got his last nine big blinds in from the cutoff with king-five, but ran into a monster when Nicholas Haynes woke up behind him with pocket aces. Kertland paired his five on the flop, but improved no further, sending him back home with $18,785 for his fourth-place finish.

Next to go was Montego Bay poker dealer Jorge Ruiz, who lost a big flip with king-queen of hearts to Haynes and his pocket tens to be left with just two big blinds. He got those last chips in the very next hand with eight-four of diamonds and would fail to catch up to the ten-eight of Hanson. Ruiz, who was all smiles even after being eliminated, received $26,681 for third place.

Hanson started heads-up play with Haynes holding a little over ten million of the 17,150,000 chips in play. Haynes was able to turn the tide by taking down a healthy pot on Hand 4 of heads-up action. Haynes' jack-ten found top pair on the flop and got two streets of value from Hanson.

On Hand 156 of the final table, Hanson called off his remaining 4,100,000 with ace-nine, and Haynes was live with his king-eight. The latter found an eight on the flop, and while Hanson picked up a gutshot on the turn, he failed to improve, leaving the WSOP Media Director as the runner-up, taking home $38,503.

Which Casino Game Has the Best Odds?