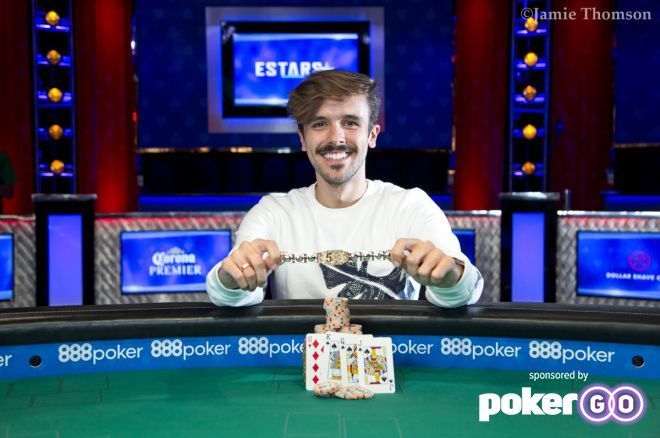 Brazil has a new hero.

It took over thirty levels over three long days for Yuri Martins Dzivielevski to become the latest WSOP bracelet winner. He triumphed in Event #51: $2,500 Mixed Omaha Hi-Lo 8 or Better, Seven Card Stud Hi-Lo 8 or Better and he could not have been happier about the accomplishment.

"This is the most special moment, for sure."

“This is the most special moment, for sure,” Dzivielevski said in an interview after his victory.

The mixed game event saw 401 hopefuls enter the tournament on June 22nd to generate a total prize pool of $902,250. After ten one-hour levels of play, that number became 128. Those 128 returned yesterday to play ten more one-hour levels, with 61 making the money and only 12 advancing to the final day of play to battle it out for a gold bracelet and the first place prize of $213,750.

Dzivielevski, known as "theNERDguy" online and at one point the number one online player in the world, now has over $900,000 in live tournament earnings, including a PCA side-event and LAPT title.

With the split-pot format and a talented lineup of players from around the world, the action was constantly back-and-forth from the get-go.

The unofficial final table of nine was reached just before the first break of the day, and it took over an hour from that point for the first elimination to occur. Thompson, Daniel Ratigan (eight place), and Andrey Zaichenko (fourth place) battled as short stacked for close to three hours before Ratigan was eliminated.

During those three hours, Dzivielevski found himself go from being in the middle of the pack to commanding chip leader. He had one-third of the chips in play when the tournament reached seven-handed play.

Another two hours went by with a dinner break in between before Alex Livingston, who was consistently among the top three in chips, was eliminated by Dzivielevski in seventh place. The hand in question was a huge, multiway pot in Stud Hi-Lo where Dzivielevski’s tens and threes were good to secure the knockout and bring his stack to over three million, greater than half the chips in play.

Shortly after that, Philip Long (sixth place) found himself short as the increasing levels got larger and larger and he was eliminated after Thompson scooped a pot in Omaha Hi-Lo for the last of his chips.

The fifth-place finisher was current WSOP Player of the Year frontrunner Dan Zack, who secured his tenth cash of the series shortly after its halfway point. Zack battled back from crumbs several times but was unable to survive after being crippled a final time when he doubled up eventual third-place finisher Denis Strebkov.

Shorty after the final break of the night, Zaichenko found himself short and was eliminated by Dzivielevski, who had maintained his stack at around three million.

The dynamics changed when play became three-handed. Strebkov had the momentum shift his way as he built his stack from as low as half a million up to 2.4 million. After that, it became Thompson’s turn as he found himself down to 330,000. He doubled twice in a row, once in each game, and then took down a heavy hand in Stud Hi-Lo that went three-ways to the river. Dzivielevski folded to Thompson’s bet while Strebkov called and lost to a full house, deuces full of queens. He had over half the chips in play with Dzivielevski and Strebkov at 1.6 million and 1.1 million, respectively.

"I think the most important part is to be present, to be happy and you have to work with what you have. I cannot think about what I lose or what I can win."

Dzivielevski was not done, however.

When asked about the journey, Dzivielevski remarked: “I think the most important part is to be present, to be happy and you have to work with what you have. I cannot think about what I lose or what I can win. If I think [about those things], I’m going to be anxious and it’s not good because I cannot go to the past and recover everything I have, so I live in the moment.”

As the levels rose and the number of bets in the tournament decreased, Dzivielevski started to win a few pots. It wasn’t long before he knocked out Strebkov and entered heads-up play versus Thompson with stacks nearly even. Thompson was the one who jumped out to an early lead; however, Dzivielevski was able to battle back to even stacks.

The most significant hand of the night came in Stud Hi-Lo that saw raises on both fourth- and fifth-streets. By the end of the hand, both players had a king-high flush though Dzivielevski had a better kicker. This gave him a three-to-one chip lead, which he later increased to five-to-one after hitting a straight in Omaha Hi-Lo

"I want to feel this feeling again and again."

Thompson was able to hang around for another 10 minutes, doubling up once in the process, but eventually found himself all in and drawing dead on the turn with two pair and a flush draw against Dzivielevski’s full house; queens full of kings.

At that point, Dzivielevski’s rail erupted and could not wait to rejoice with him, taking pictures with him and tossing him up into the air in celebration. Dzivielevski, despite the chaos around him, remains focused. He plans to keep playing and keep fighting for more titles. As the man himself put it, “I want to feel this feeling again and again.”