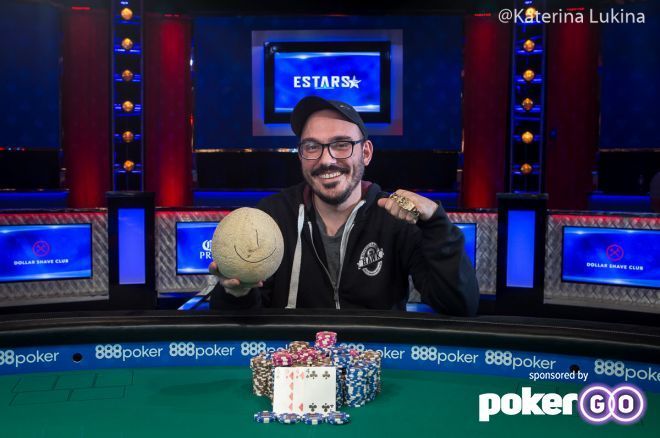 Aristeidis Moschonas has pulled off a chip-and-a-chair comeback worthy of the history books, rebuilding a stack from a low point of less than one big blind to claim his first World Series of Poker gold bracelet and $194,759 in prize money. Rapturous Greek shouting met his 2019 WSOP victory over last year’s $10,000 Stud champion Dan Matsuzuki, his final opponent out of a total field of 2,403 runners.

Moschonas, clutching a melon, gave a brief, self-deprecating summary of the period of struggle that preceded his dominant final phase.

"When I play online and lose some pots, I call my opponents ‘melons.'"

“I was down to half a big blind after the first four levels," he said. "I doubled up four times, and that’s it.”

As for the melon, he explained, “When I play online and lose some pots, I call my opponents ‘melons’ (pepóni in Greek). So that’s why I brought the melons."

"If I get a bad beat, I will give it to someone,” he chuckled.

There was a lot more to navigating the final table than four all-in pots, however. Returning with a middling stack, Moschonas faced serious obstacles in the form of seemingly permanent chip leader Adam Lamphere. who’d grabbed the lead on the first day of play and rarely relinquished it, and the experienced Matsuzuki, both with double the chips of the next-highest stack.

At first, Daniel Moravec, the returning short stack, looked as if he would be the one whose comeback story could make headlines. He tripled up on Hand #3 and stayed clear of the early aggression shown by the chip leaders. However, his comeback was shortlived and he busted in eighth place in an early PLO round to Matsuzuki, taking home $21,469.

Following him to the rail was, unexpectedly, Lamphere. With the stratospheric blind levels of the final table, the loss of a few big hands --- notably to Raghav Bansal — were enough to pull Lamphere’s stack down to the point where Rainer Kempe covered him and sent him to the rail in another PLO hand.

Stephen Ma was next to bust, outlasting Lamphere by the merest slick of chips on felt; his final hand was for less than a quarter of a big blind, but the pay jump gave him $36,852 for his sixth-place finish. Ma was followed to the rail by Ashish Ahuja in a big PLO-hand against Matsuzaki, where his double-suited ace-king nearly got there against Matsuzaki's aces. By the turn, Ahuja had plenty of two pair and flush outs but bricked the river to finish in fifth.

Returning from the break, the eventual winner had his work cut out for him four-handed. Matsuzuki and Kempe held over 20 million each, while Moschonis was down to not even one full big blind. While it didn't hurt his initial doubler Bansal much to part with a single million, by the time he doubled against Kempe — the fourth time — in quick succession, he had enough chips to knock the German high-stakes pro down to a bustable stack. Kempe was, in fact, next to be eliminated, losing king-ten against ace-queen in hold'em, and was prevented from adding a WSOP bracelet to his bulging trophy cabinet.

Three-handed, Moschonas again dropped into last place chip-wise, with Bansal and Matsuzuki trading the lead until a huge three-way all in hold’em hand turned the tables once again, propelling Moschonis to a lead none would suspect even fifteen minutes before. When Bansal, an accomplished tournament player with over $1 million in live winnings to his name already, busted in third place, Moschonas’ rail could taste zero-to-hero victory and cheered along with every pot won by their friend.

"It’s like the perfect format for me, because I have an edge against hold’em players that don’t know how to play PLO, as well as the opposite.”

Not to be outdone, Matsuzuki’s supporters cheered back as he aimed to claim a second bracelet. It was not to be, however. Heads-up play lasted a matter of hands, and Matsuzuki had to settle for second place and the not inconsiderable sum of $120,374.

The final hand had all the chips flying in on a nine-five-four flop with two spades. Matsuzuki found himself in a deep hole with ace-queen-nine-eight, way behind Moschonas' ace-nine-four-four for bottom set. The seven on the turn left only a gutshot to save Matsuzuki's chances of winning a bracelet in back-to-back years, but the trey on the river sealed it for the Greek instead.

Moschonas, victorious, attributed his success to his experience in both formats: “My main game is PLO. I’m a PLO cash game player online, and I also play no-limit hold’em tournaments. So it’s like the perfect format for me, because I have an edge against hold’em players that don’t know how to play PLO, as well as the opposite.”

The future holds one definite for Moschonas – the upcoming $10,000 Pot-Limit Omaha Championship. “I actually wanted to play the $25k that’s running now but I went too deep in this one, but it’s okay I guess."