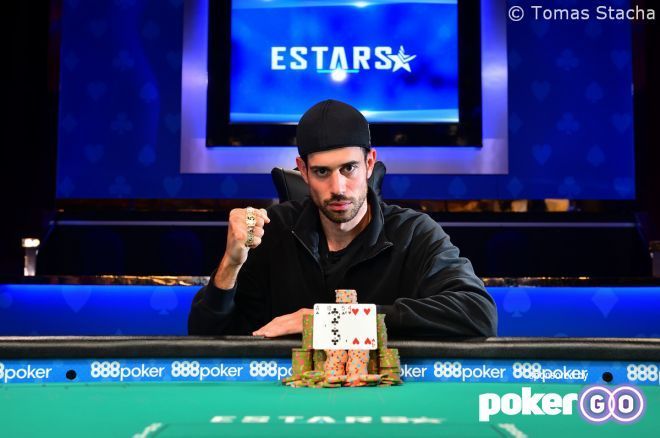 Nick Schulman is no stranger to the bright lights of poker. The multi-bracelet winner and PokerGO commentator has been a part of final tables at the biggest stage from numerous angles.

On Monday, he added to that acumen becoming the champion of the 2019 World Series of Poker Event #65: $10,000 Pot-Limit Omaha Hi-Lo 8 or Better Championship. Schulman topped a field of 193 entries en route to the first-place prize of $463,670 and his third career WSOP gold bracelet.

The victory was Schulman’s first bracelet in seven years. After the tournament, he stated that the game has changed a lot in the meantime: “The last seven years have seen a tremendous influx of new ideas and I’ve tried to kind of hang along with the game and here we are. I’m better but everybody’s better.”

If Schulman’s statement needed proof, he successfully navigated through a final table that was over half full of previous bracelet winners in addition to last year’s runner-up of this same tournament, Michael McKenna.

Day 4’s final table of seven was reduced by two on the very first hand of play when McKenna was all in from the big blind for 65,000, less than the 80,000 from the first level of play. Corey Hochman chose to get his last two big blinds in on the hand as well and 2005 WSOP champ Joe Hachem called and hit two pair while fading a low draw to score the double elimination, sending McKenna home with $58,918 for his seventh-place finish while Hochman won $77,763 for sixth place.

Denis Strebkov started the day with just 11 big blinds but managed to hang on and ladder up to fourth place. He exited when his flopped top set couldn't hang on against the wrap straight draw of Brian Hastings. Hastings turned the straight and Strebkov failed to improve, leaving the Russian native with $143,700 for his deep run, continuing his impressive summer after having recently taken third place in Event #51: $2,500 O.E. for $89,744 as well.

Hachem fell a short time later and all of a sudden a returning field of seven turned to two before the first break of the day. Hachem's undoing was a combo draw gone wrong, as his open-ended straight draw, flush draw, and low draw on the turn was against Schulman's made straight and a higher flush draw. Hachem would fail to hit his low and was forced to settle for third place and $201,041, coming just shy of adding a second WSOP gold bracelet to his wrist.

Schulman started heads-up play with a more than 2:1 chip lead over Hastings and with almost 116 big blinds between them at the start a deep battle was in the making. Early in Level 28, Schulman had a chance to score the victory when he flopped top set against the middle pair and nut low draw of Hastings. Hastings made his low, however, and the duo battled on. Hastings managed to get a double in Level 29, and by the end of the Level 30, actually took the chip lead for a short period of time.

The biggest hand of the tournament took place in Level 31 when Schulman turned a full house against Hastings' trip tens, and when Hastings failed to improve, he was left with just ten big blinds. He managed one double, but on the final hand of the tournament, Hastings got his last 2.87 million in chips in with ace-six-three-deuce, and Schulman put him at risk with ace-ten-five-four. Neither player managed to improve, resulting in Schulman earning his third bracelet while Hastings took home $286,570 for his runner-up performance.

When asked about the heads-up match afterward, Schulman said it was tough to handle the mental dance between being in a position to put away a super tough opponent and how difficult it is to actually do so. He gave tons of kudos to Hastings for being a super tough opponent and a legend in his own right, on the hunt for his fifth career bracelet. Schulman also acknowledged how tough the entire field was, emphasizing that everybody out there was trying to win.

“It was on my mind but at the end of the day, you have the poker decisions and that’s really all we can control so I tried my best to focus on that as much as I can.”

Luckily for Schulman, the rest fell into place as well and he claimed the title of Pot Limit Omaha Hi-Lo World Champion as a result.