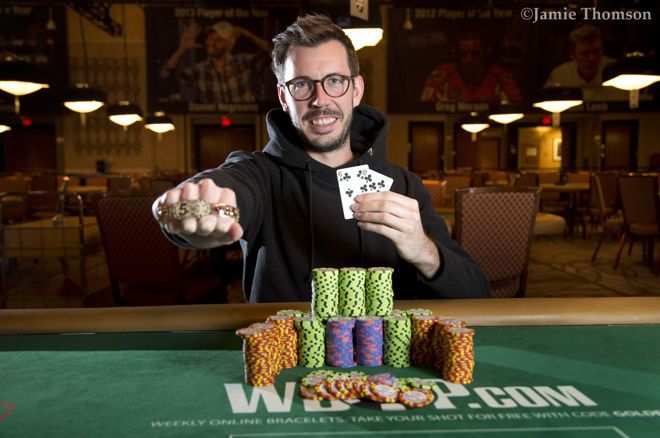 With 1,867 total entries, lots of familiar faces gave it a shot. Kalidou Sow, Bryn Kenney, Kenny Hallaert, Dominik Panka, Bart Lybaert, and Ryan Laplante were just some who tried but failed to make the money in this event.

"It wasn’t the biggest cash, but the bracelet is a big achievement that I wanted to have."

Lauck's rail was very loud and active once he reached the final table as chip leader, but he wasn't the only one with fans on the sideline. Brazil's Fernando Viana finished in third place ($116,426) and both Lauck and Viana's rail sang songs during the final table. Lauck put his head down at one point and covered his ears to help him concentrate. ''The rail was so loud, so it was hard to focus. Especially at this stage, you can’t make mistakes. It’s pretty expensive if you do [so] at this stage. I tried to focus and not listen to the rail.''

The German online grinder once won over $1.5 million triumphing in the WCOOP Main Event so it wasn't his biggest cash to date but for sure one that felt special to him. Lauck said the following when asked about this particular achievement: ''I guess one of the biggest [achievements], for sure. It wasn’t the biggest cash, but the bracelet is a big achievement that I wanted to have. For me, it was a special win because I was once heads-up and I lost. I wanted to have this bracelet, and it feels very good.''

The final table began at Level 32 with blinds at 100,000/200,000 with an ante of 200,000. Jonas Lauck started the final table as the chip leader. He kept adding to his stack as he was responsible for seven of the eight eliminations at the final table.

"For me, it was a special win because I was once heads-up and I lost. I wanted to have this bracelet, and it feels very good."

Edward Courage was the first casualty once down to a single table. Courage moved all in for his ten big blinds from mid-position with pocket eights and got snap-called by Aaron Johnson who had aces in the small blind. Johnson improved his hand to a full house, and Courage was sent to the rail in ninth place.

A few hands later, Aaron Johnson lost a significant flip with queens against Robert Bickley's ace-king and was left with twelve big blinds. Soon after, his tournament was over when Jonas Lauck raised under the gun with kings, and Johnson three-bet shoved with ace-queen for his last chips. Lauck stayed ahead; ending Johnson’s fantastic run in eighth place.

Next out was Arron Woodcock in seventh place. Woodcock had fewer than four big blinds left and needed to find a double up fast. He shoved with queen-seven suited under the gun but got snap-called by Lauck who found aces from one seat over. Woodcock flopped an open-ended straight draw, but the turn and river bricked, and that was it for his tournament’s life.

Aaron Pinson was Lauck’s next victim. Pinson jammed his last eleven big blinds from the hijack with ace-ten and got called by Lauck from the big blind with eights. Pinson flopped a ten to take the lead, but that didn’t last as the river brought an eight and Lauck made a set to win the pot and collect another bounty.

Anil Jivani was sent to the payout desk in fifth place when Lauck shoved from the small blind with queen-six, and Jivani called, putting at risk his last nines blinds with king-eight. An eight fell on the flop, and Jivani was eliminated.

Markus Gonsalves headed to the rail in fourth place when he moved all in for his last seven blinds from the cutoff with seven-five suited and Lauck called from the button with king-queen suited. Lauck made kings and tens taking all of Gonsalves’ chips.

Gonsalves was joined by Fernando Viana soon after when Viana three-bet shoved with ace-queen from the big blind and Lauck who was the original raiser called with nines. Viana didn't hit and headed to the rail in third place instead.

The heads-up portion of play only lasted two hands, and the tournament ended when Robert Bickley three-bet shoved on the flop with a pair of kings in his hand, and Lauck snap-called as he had flopped an open-ended straight draw and a flush draw with ten-six suited. The turn was safe for Bickley, but the river gave Lauck a straight, and a flush as well and Lauck was crowned the champion.