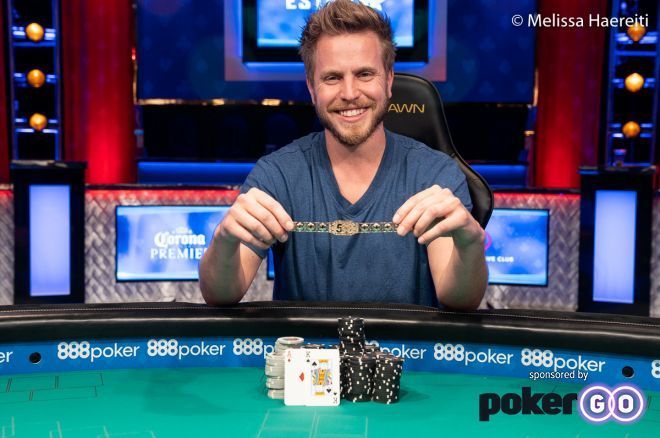 After almost six hours of play on Day 3, Jeremy Pekarek is victorious in Event #9: $600 No-Limit Hold'em Deepstack for $398,281 and his first gold World Series of Poker gold bracelet.

Of the 6,151 entries in this event, just 582 players made it to Day 2, after which point the tournament staff decided to extend the event by one more day. A total of 923 players eventually made the money on Day 1, all snagging a piece of the $3,229,275 prize pool.

The Sycamore, Illinois native topped a field of a staggering 6,151 entries to earn his biggest career cash and fourth tournament win. Pekarek defeated Dan Kuntzman heads up in just two hands, followed by a wave of emotion after seven years of chasing his dream of winning a bracelet. "It's been an up-and-down journey. This was always the goal. Whenever I started playing poker I was like, I wanna win a bracelet and here I am," Pekarek told PokerNews.

"This was always the goal. Whenever I started playing poker I was like, I wanna win a bracelet and here I am."

Pekarek almost tripled his career earnings, with his biggest cash being over $44,000 before this win. "I just feel like this is a culmination of the past five years of just me learning more about myself. Self-awareness is everything in this game," he explained. "There was a lot of lessons I had to learn when I came out here. And I wasn't really ready for it. I learned a lot of hard lessons and I felt like I was ready."

In talking about his strategy coming in to the final table, Pekarek talked about being able to handle beats and persevere. "Just being relentless and hanging in there and fighting is key to these things. I mean Day 2 I was probably on ten big blinds for six hours or so. I really fought to make it here. I really am just kind of speechless," said an emotional Pekarek.

The newly-crowned champion was planning on playing a full schedule this summer, but things might change with this big win under his belt. "I feel like this was the first year I was actually prepared to play multiple events. I'm just gonna enjoy this, go home, celebrate, regroup."

It took two hours until David Elet got his remaining stack in the middle with ace-ten, well behind Juan Magana's pocket kings. Unfortunately for him he was unable to pick up even a sweat, and was eliminated in 9th place for $35,183. Remarkably, he was down to just 15,000 in chips late on Day 2 and spun his stack up, putting himself in the top three to start the day.

The chip lead changed several times throughout the final table, with almost everyone leading at some point. Benjamin Underwood took over the lead quickly in the day, with Noomis Jones hot on his heels, eventually taking the lead himself. Start-of-day chip leader Paul Jain also took an unexpected turn, and found himself at the bottom of the counts after about three hours of play.

"Day 2 I was probably on ten big blinds for six hours or so. I really fought to make it here."

John Skrovan was short and doubled, but then got his stack in the middle with ace-jack, up against Tan Nguyen's king-queen. The board ran out clean until a king hit the river, sending him home in 8th place for $45,418.

Soon after, Jain was still the short stack and jammed his final five big blinds in the middle with six-deuce suited, but was dominated by Magana's ace-six in the big blind. The flop came ace-high and Jain was eliminated in 7th place, pocketing $59,075 for his deep run.

After a slow start to the day, bust-outs were fast and furious. Nguyen put his final chips in the middle with ace-ten, in good shape against Kuntzman's queen-jack. Unfortunately for him, the flop came jack-high and he was unable to improve. Nguyen fought hard, eventually falling in 6th place for $77,418.

Jones was next to go in 5th place shortly after, flipping with jacks against Kuntzman's ace-queen. The dealer put out a queen-high flop and Jones couldn't recover, sending him to the cage to collect $102,216.

Almost immediately after, Underwood defended his big blind against a raise from Pekarek. The flop came nine-six-six and Underwood jammed all in, getting a quick call from Pekarek. Underwood revealed seven-five for a gut-shot, in rough shape against Pekarek's ace-nine for two pair. The board ran out dry for Underwood, sending him home in 4th place for $135,959.

Three-handed play lasted for a while, starting with a huge double for Magana. He called a four-bet from Pekarek for his tournament life and tabled ace-king, well ahead of ace-queen of clubs. The sweat was real when the flop brought two clubs, but the turn and river were bricks. Magana's rail went wild as he took a commanding lead over Pekarek and Kuntzman.

Kuntzman then doubled through Pekarek, and then Pekarek doubled through Magana in a whirlwind of action three-handed. Pekarek started to chip away again, until he was eventually in the lead once again. Eventually Magana put his stack in the middle as a huge favorite with ace-ten, up against Pekarek's ten-six suited. Unfortunately for him the flop paired Pekare's six and Magana was eliminated in 3rd place for $182,173.

Heads-up play between Pekarek and Kuntzman lasted just two hands. Pekarek took the first pot on the turn, and in the second and final hand, got it in with ace-king against pocket threes. Pekarek paired his ace on the turn and the rest was history.

The action continues at the World Series of Poker with live updates brought by PokerNews from the tournament floor. The next live streamed final table from the series will be the $5,000 No-Limit Hold'em that will be broadcast Thursday, June 6 at 1 p.m. on CBS All Access and PokerGO.

Moment of the Week: Chance Kornuth Gets Some Phil Hellmuth #Positivity