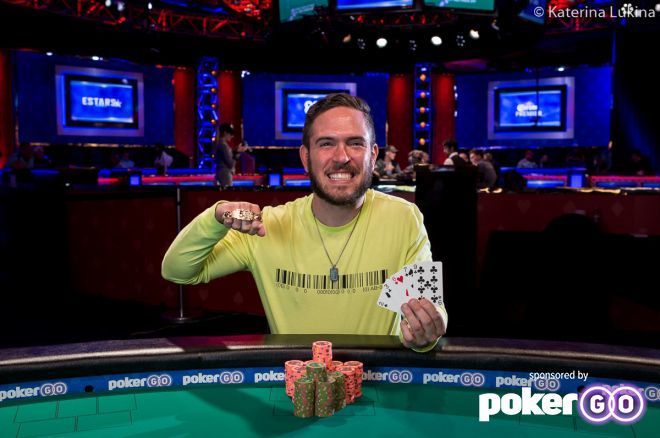 Yuval Bronshtein claimed his first bracelet and $96,278 after making his tenth World Series of Poker final table appearance. This year’s Event #13: $1,500 No-Limit 2-7 Lowball Draw drew the largest field ever seen of this variant and buy-in at the WSOP, and the money awarded to the finalists reflected that fact.

After eliminating his final competitor Ajay Chabra, who had dominated the final table for much of the day, Bronshtein called his mom to let her know of his success. “I’m just overflowing with happiness right now,” he said in an interview.

“This is considered to be the purest form of poker and I tend to agree with that. It’s really about reading people,” he said. Starting the day with the second shortest stack, Bronshtein had to work for his chips, especially as tough opponent Chabra returned with more than a third of the chips in play. “I never lose confidence in myself,” he said. “I have seen people come back and win tournaments from a short stack. It’s a bit more fun when you make a big comeback like that.”

Early action was all focused around German player Bjorn Geissert. Returning for the final day as the shortest stack with 14 big blinds, he did anything but sit on his chips, making a bid to increase them that ended when he ran into a timely pat eight in Chabra’s hand within the first 20 minutes of play. His sixth-place finish netted him $13,892.

Michael Sortino was next to be eliminated, after a cagey level during which players took turns to take down hefty blinds and raises with three-bets. In a blind-on-blind confrontation with Chabra, he called when set all in, and drew one pip worse than his opponent to bust in fifth ($19,313).

A monster three-way all-in pot changed the dynamic of the table by tripling up Bronshtein, sending Steven Tabb to the rail, and dropping Jerry Wong’s stack into the danger zone. Tabb picked a cold spot to open-jam with the table short stack, running into two good pat hands at the same time. Tabb has already racked up over $1 million in live tournament cashes, adding $27,477 to his total with this fouth-place finish.

"The bad things that have happened to me have made me stronger and I’m really happy.”

Wong navigated his short stack around his opponents for a while, picking spots to move in uncalled and make some chips back. Then in a dramatic five minutes, Chabra doubled Wong up then busted him with a ten when Wong’s nut draw paired a deuce. The former November Niner received $39,986 for third place.

When heads-up play hit, the bracelet came out, the golden symbol of WSOP triumph they’d battled through a record-breaking field to win. Chabra held a 2:1 chip lead and although pots were traded, he was edging ahead. At one point he had Bronshtein all in for his tournament life, but after this crucial hand, his hold on the tournament slipped as Broshtein first equaled, then overtook him in chips. Chabra took his turn winning an all-in situation but in the end, it was Bronshtein who emerged victorious.

The bonhomie that characterized the whole event carried on right the way through the final. Banter and high-level play kept the rail entertained and the atmosphere at the secondary feature table was second to none.

“I have had a rough year,” said Bronshtein as he was being interviewed after his win. “So this is really good. The bad things that have happened to me have made me stronger and I’m really happy.”