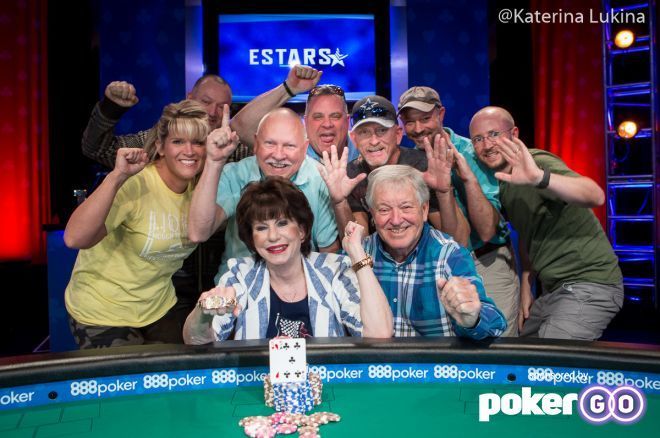 The 2019 World Series of Poker has finally crowned its first woman's champion outside of the ladies event this summer as Susan Faber outlasted 1723 players to win her first bracelet in Event #71: $500 SALUTE TO WARRIORS No-Limit Hold'em.

"I am so excited and so thrilled to be a bracelet winner! This was definitely on my bucket list."

”I played this event because my husband is a veteran and it was wonderful that I could support the veterans."

Faber has been playing poker for the last 10 years but has taken it more competitively these last five. "I play the circuit events in Cherokee and I was planning on playing the Main Event this year but some of my family members talked me out of it, probably because of the money, but I'm sure glad they did because I wouldn't have played this event, and I wouldn't have won my first bracelet."

Faber has a career total of $55,799 with the majority of it coming from the WSOP circuit. Today's victory only marks her second career WSOP cash with her first coming this summer when she finished in 1089th place for $1,500 in Event #64: $888 No-Limit Hold'em - Crazy Eights.

Faber came into the final day second in chips and instantly got to work when she hooked Kulwant Singh with her pocket jacks after he jammed for 2,550,000 holding pocket tens and he was eliminated in 8th place. Next to fall was Jose Annaloro who was unable to pair his king-jack offsuit against Dean Yoon's pocket tens.

The next casualty was Jordan Knackstedt who looked to be in great shape to double up after pairing his king-eight on an eight-five-nine board but the dealer had different plans as Chris Canan turned two-pair with his jack-eight and that was "all she wrote" for Knackstedt as he was eliminated in sixth place.

"I ran really well, I got a lot of pocket pairs. I had jacks two maybe three times, I had pocket aces to take out the chip leader, and of course, at the end, I had my pocket fives."

Faber claimed her second victim at the final table in what would be the turning point for her, as it was Taylor Carroll who came into the day as the chip leader. Faber limped in on the button expecting her opponents to raise, and she was right. Rob Stark raised to 850,000 from the small blind and Carroll jammed for 7,730,000. Faber called while Stark folded and unfortunately for the Day 2 chip leader, he ran his pocket sevens into Faber's rockets and the retired Air Force vet took his exit in fifth place.

"I ran really well, I got a lot of pocket pairs.”

Thirty hands later Faber claimed another victim as she and Chris Canan got into a three and four-bet exchange preflop before all the chips found their way in the middle after a seven-three-ten flop. Canan was ahead holding pocket kings and was looking good until Faber hit running cards for a rivered straight and Canan rolled out in fourth place.

Three-handed action saw Dean Yoon double up a few times but it came to an end when he jammed his remaining 1,650,000 chips in from the small blind holding king-eight off and was called by Faber from the big blind who held six-two suited. Yoon held strong with his king-high hand until Faber found a pair on the river and Yoon took his exit in third place.

Heads up battle only lasted five hands when Rob Stark open-jammed for 6,050,000 holding seven-three offsuit and was snapped off by Faber holding pocket fives. Stark picked up a gutter ball straight draw on the turn but was unable to connect on the river and was eliminated in second place.

"I am so excited that I could do this at my age. I played this event because my husband is a Veteran and it was wonderful that I could support the Veterans."

That brings an end to this tournament! Tune in for updates on every WSOP event here on PokerNews throughout the rest of the summer. Watch final tables live from the WSOP at PokerGO.com