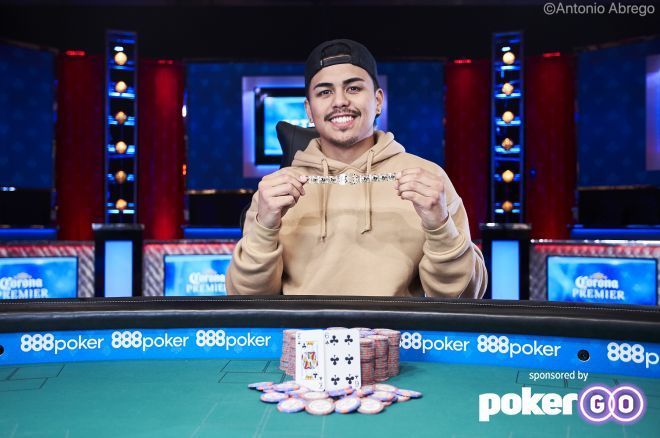 A new millionaire has been crowned at the 50th Annual World Series of Poker in Event #50: Monster Stack - $1,500 No-Limit Hold'em. Kainalu McCue-Unciano rose to the top through a field of 6,035 to capture his first ever WSOP gold bracelet after defeating Vincent Chauve in a back and forth heads-up match.

"This is the biggest final table I've ever been at, and I just tried to not think about how much money I was playing for."

It took five long days of poker to earn himself a cool $1,008,850. Coming into the tournament, McCue-Unciano's largest cash was just over $75,000 with nearly $500,000 in career earnings. After today, the Hawaiian will top both of those numbers, and he was at a loss for words after the win. "It feels great! This is the biggest final table I've ever been at, and I just tried to not think about how much money I was playing for."

Upon winning the final hand, the Hawaiian rail burst into cheers, and there was no escaping the biggest smile in the room from McCue-Unciano. "I've got the best support behind me. My girlfriend is always there when I need her. My friends are just as stoked as I am." McCue-Unciano got a little choked up when asked what it meant to win a bracelet for his state of Hawaii. "Everyday I told myself that I would do it. It's just an unreal feeling," as he took a little pause to gather his thoughts. "It's only kicking in slowly; it's a crazy feeling."

"Everyday I told myself that I would do it. It's just an unreal feeling."

When asked about his plans for the rest of the summer, McCue-Unciano said he would definitely be back to play in some more events. "I'll be playing the Main Event for sure. Definitely gonna be playing in some bigger events. Gotta get some more bracelets!"

But for now, he'll be taking a little break from the Rio confines to enjoy some time with friends. "We're heading to Disneyland tomorrow for a few days. It's gonna be a little more fun now," he laughed.

There was no shortage of action on the final day as things got started with a bang in the very first hand. The start-of-day chipleader Benjamin Ector ran a triple-barrel bluff against Gregory Katayama who called him down with a set of sixes for all of his chips. That dropped Ector down to one of the shorter stacks for the time being.

Igor Yaroshevskyy came into the day with just over ten big blinds and was unable to pick up any hands in the early going. He eventually moved all in for seven big blinds on the button with king-four suited and was called by McCue-Unciano's ace-three off in the small blind. The former Main Event final tablist was unable to find any help on the board and was the first casualty of the day in sixth place.

Despite finding a small double up, Ector was unable to stay alive much longer. McCue-Unciano shipped all in on the button with jack-eight suited as one of the big stacks and Ector called it off with pocket sevens in the small blind. McCue-Unciano flopped a pair and flush draw and wrapped things up with a flush on the turn to eliminate start-of-day chipleader Ector.

Bart Hanson was left on the short stack with four players remaining, and he too had trouble picking up any good hands. He eventually got all of his chips in the middle with a dominated ace against Katayama. Hanson turned a straight draw, but the river was no help to quickly bring the field down to three players before the first break of the day.

Once the players returned, Chauve became a bystander as the two big stacks continued to battle in monster pots against each other. Chauve's wish came true when McCue-Unciano and Katayama clashed in a monster pot. McCue-Unciano rivered a straight against Katayama's top set for the largest pot of the tournament by far. That dropped Katayama down to one of the shortest stacks while McCue-Unciano took a monster chip lead against his two opponents.

It wouldn't be long after when Katayama stuck in his last five big blinds with jack-four from the small blind only to be called by Chauve's queen-jack. A queen on the flop all but ended Katayama's hopes who was forced to head to the payout desk in third place.

That left McCue-Unciano and Chauve to battle it out in a heads-up match that left both players on the edge of their seats. Going into the heads-up match with Chauve, McCue-Unciano held a commanding chip lead, but Chauve was able to double in just the second hand. The Frenchman continued to chip away and even took over the lead at one point.

The heads-up battle went on for over three hours with many twists and turns throughout. The blinds increased, and soon enough, they were both hovering around the thirty big blind mark.

McCue-Unciano opened up a massive lead after value betting third-pair on a paired board, and Chauve called with bottom pair. In the next hand, McCue-Unciano shoved all in with king-six suited, and Chauve quickly called off his eight big blinds with pocket tens. McCue-Unciano flopped two pair and made a full house on the turn to leave Chauve drawing dead.

That wraps up the PokerNews coverage from another event here at the Rio All-Suite Hotel and Casino, but there is still plenty of action going on so keep it locked here. You can follow along with the action in written form on PokerNews, but you can also watch it LIVE with the majority of final tables broadcasted via PokerGO. Sign up now!