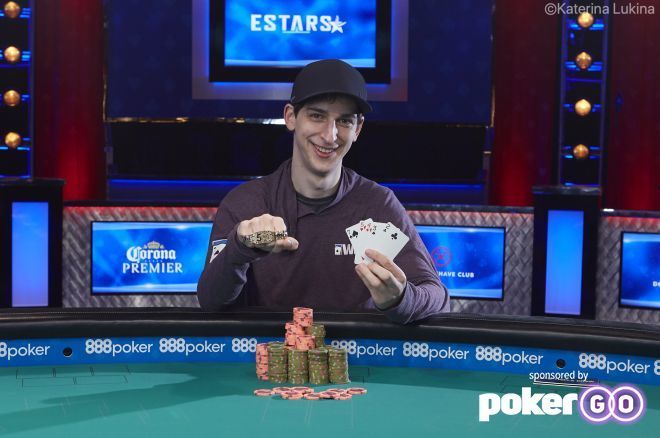 He may have been to numerous WSOP final tables, but Dan Zack had never found his way to the podium. That changed on Day 6 of the 2019 WSOP as the American mixed games crusher prevailed in Event #6: $2,500 Limit Mixed Triple Draw, outlasting the 296-entry contest.

Zack earned $160,447 for his efforts and, maybe more importantly, the prestigious hardware he'd been chasing for years. Zack's first win at the World Series was emphasized by his wild run in the tournament: he maneuvered virtually no chips for two and a half days.

"This whole tournament I was not above average until I literally came to the final table with seven left."

"This whole tournament I was not above average until I literally came to the final table with seven left," the champion revealed. Zack claimed that he kept sending updates to his brother on each break and it was monotonous. "It has been 'yeah, I'm in dead last'. Just over and over again."

While he looked to be one foot out the door from the start, Zack managed to grind his short stack to the final day, coming back tenth out of thirteen in chips.

However, nothing seemed to have changed when the remaining players returned to the felt. Zack soon found himself on a nub, possessing fewer than two big bets not at one, but at two points. Yet nobody was able to finish him off, and the pendulum would soon rapidly swing.

Zack's comeback started on the final two tables in a hand of badugi in which he was all in predraw, facing two opponents including David Gee with a patted badugi. Zack managed to outdraw him to kick off an outstanding surge back into contention. Everything started to click for the triple draw specialist.

Zack hit a massive heater, making strong hands and climbing through the standings. His triumph, however, was hardly only about the made hands. Zack pulled off a brilliant bluff-catch against Jake Schwartz, picking him off with a pair of deuces versus patted threes. That hand cemented Zack as a favorite to take down the bracelet.

"That felt like a big shift in itself and a confidence boost."

"That felt like a big shift in itself and a confidence boost," he would comment after his win.

The following stretch felt heavily lopsided. Zack kept increasing his piles, running away from the remaining competition. It was mostly about how he'd cope with the pressure built over the years of frustrations at final tables. Despite having that in mind, Zack never lost composure and focused on his performance.

"I've played a ton of short-handed triple draw and badugi online," he said, adding that the mixed triple draw event was tailor-made for his abilities.

With three players left, Zack was guarding nearly eighty percent of all chips in play. He knew probably better than anyone else that his job was far from over, but that's not how his friends felt. Zack admitted that he started receiving congratulations during the dinner break, and that's when he had to deal with nervosity. Fortunately for him, it didn't take him long to finish first Brayden Gazlay (3rd for $65,217) and then Sumir Mathur (2nd for $99,153). Mathur's performance was particularly impressive as he had no reported live cashes to his name coming into the tournament.

The glory, however, belonged to Zack who was able to erase a WSOP stigma. "This is a relief. I was starting to question if I was doing something terrible at every final table that I made," Zack revealed. It had become a running joke that Zack had had the second-most WSOP final table appearances without making top three, "trailing" only Tony Cousineau.

"This is a relief. I was starting to question if I was doing something terrible at every final table that I made."

Now that he's off the hook, he can focus on a goal that he set three years ago. "I always came in for the first week or so with the plan to do that, and that if I didn't do anything in the first week, I'd usually end up in cash games," he said. With a bracelet on his wrist and the series still in early stages, Zack is now left with a wide-open playbook, considering his versatility.

He claimed that he will push hard for the Player of the Year honors, and while he'll miss five days of the grind when his girlfriend will be in town, he is in good shape to stay among top-ranked players on the leaderboard.

Zack made it through to Day 3 in the record-breaking Big 50 event, so he's likely to boost his POY points in the next few days. Continue to follow PokerNews live updates from the World Series of Poker to find out what the future weeks have in store for Zack and others as there are dozens of bracelets waiting for their owners. The next final table you can watch on PokerGO is today's $10,000 Short Deck event.