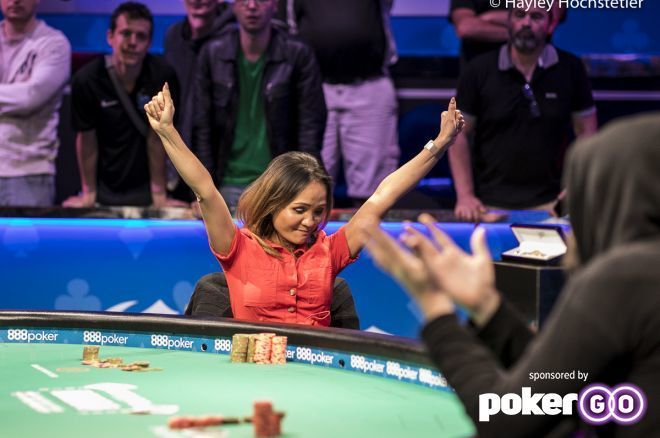 On Thursday, July 11th, the final six players from a 193-entry field of Event #77: $3,000 Limit Hold'em 6-Handed returned to the Rio All-Suite Hotel & Casino to play down to a winner. Tu Dao took down the title after she defeated Alain Alinat head’s up to win her first gold bracelet and $133,189. She became the second woman to win a bracelet this summer in an open event.

Dao, who finished fourth in the Ladies Event this summer for $52,007, is more familiar to the cash game tables, which are "her bread and butter." She started to play some live tournaments again after a couple of good results recently.

On why there was a five-year gap on her Hendonmob, Dao explained she used to play lots of tournaments but didn't get anywhere for a long time. She felt like she "wasn't good enough" and needed to gain some confidence back. Dao credited her friend Benjamin Underwood for helping her to train and prepare and for the support they give to each other.

Now she feels “Very excited and happy. My kids are watching, and it makes them very proud."

When asked what she's going to do with her winnings, Dao said she hadn't thought about it yet; she's looking forward to going home and has already booked her flights for tomorrow. "It’s been a long time, and I miss my kids and my dogs."

During the first two levels of the day, the six final table players stayed in their seats. Tu Dao, chipleader at the beginning of the day, was involved in many pots and managed to extend her lead to almost half of the chips in play within ninety minutes.

Oleg Chebotarev, down to a short stack, found pocket nines on the button and five-bet versus Alain Alinat who made the call with Ace-jack and hit two pair on the flop. Chebotarev put his last chips in the middle but found no miracle throughout the rest of the board, and he had to settle for sixth place and a $19,687 payday.

A few hands later, Jan Suchanek followed him out the door in fifth. It happened when Suchanek battled preflop against Ian O'Hara. All the chips went in the middle and Suchanek was in good shape for a double up with king-queen off, dominating O’Hara’s queen-eight off. However, O’Hara hit a flush and just like that; Suchanek was gone, an exit good for $27,251.

Around 30-minutes later, Chad Eveslage busted against Alinat when he five-bet shoved having hit two pair on a paired flop with two hearts. Alinat looked him up with the flush draw and hit when the turn brought another heart. Eveslage was ousted in fourth place for $38,561 after the river bricked.

The three-handed battle lasted for two hours, and it wasn't until the middle of Level 25 that O’Hara would bow out. The latter lost a few pots and was down to a few big blinds when he called off a bet from Dao for all his chips on a seven-high paired flop. Dao was ahead with king-jack while O’Hara held jack-nine and didn’t hit one of the outs he needed on the river to be eliminated in third place for $55,749.

This left Dao and Alinat to battle it out for the bracelet. Heads-up play began with Dao holding a 2-1 chip lead over Alinat, but the two would engage in a back-and-forth match. Each took turns holding the chip lead on several occasions over more than two hours, but eventually, Dao won a few hands in a row to once again pull out to a big lead.

In the final hand of the tournament, Dao six-bet preflop with king-nine offsuit and Alinat called all in for his last chips with the best hand, king-queen offsuit. Unfortunately for the French player, Dao paired her nine on the flop, and even though the turn brought a flush draw to Alinat, he didn’t hit on the river. Alinat finished second for $82,312, his best live cash to date.

Thank you for following all the action with PokerNews and be sure to check back in over the next few days as the 2019 WSOP comes to an end.

There's still chance to sign up for PokerGO and watch some of the greatest poker action live via your mobile, tablet, or tv!