Abhinav Iyer Takes Down The Closer to Win His First Bracelet and $565,346 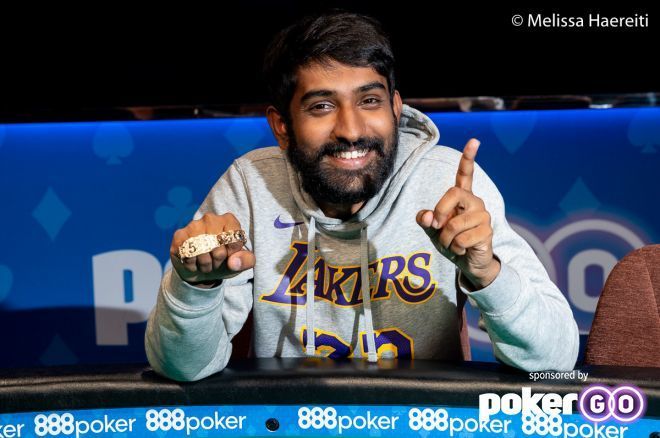 After two days of action-packed play, one man was left standing after the dust had settled, and that was Abhinav Iyer. With unlimited re-entries across all three starting flights, 2,800 entries were registered in total, generating a tasty $3,780,000 prize pool. That prize pool meant a top prize of $565,346 and the WSOP bracelet was Iyer's at the end of a mammoth final day effort.

"The Indian rail was pretty great … I feel really proud."

Iyer not only nets more than half a million dollars for his victory and his first bracelet, importantly, but he also brings home the fourth bracelet of the series for his home country, India. Speaking to PokerNews after his win, Iyer explained that poker “is a booming market” back home. “Now, more and more people are getting into poker. It’s growing, and I hope this [win] can enhance that growth.”

He certainly had a lot of support. “The Indian rail was pretty great … I feel really proud.” They were there cheering him on every step of the way on the final table. It was a hand much earlier, however, that set Iyer on track. The tournament-defining hand took place when Iyer eliminated Jeff Gross (32nd) after finding pocket-queens in the hole when Gross had moved all in with ace-ten in front of him. Following that hand, Iyer found himself with a big stack that he managed to hold onto for the duration of the tournament.

Stars of the Poker World

There were numerous stars of the poker world in contention at the start of the day when 196 survivors returned at noon. Over the course of the first few hours, many of them fell by the wayside, including last year’s champion Joe Cada. Phil Hellmuth, Michel Mizrachi, Jack Salter, Erik Cajelais, Manig Loeser, Justin Young, Mike Sexton, Kristen Bicknell, and Bertrand Grospellier were a few of the others who were unable to convert their stack into a deep run.

Once Tran was eliminated on the final table bubble, players took a scheduled dinner break. They returned with blinds putting pressure on many of them, and the first to fall was Jason Reels who lost with ace-three suited against Iyer’s king-ten, leaving him to collect a $47,758 payday for ninth place.

Next up was Steve Yea who lost a flip with ace-king suited versus Adam Johnson's pocket tens, netting him $61,834 for eight place.

The most well-known player at the table, four-time bracelet winner Shaun Deeb was out in seventh for $80,766, despite making a huge stack after rivering an ace with ace-queen suited against ace-nine suited and pocket queens when there were two tables left. His run didn’t last, and he busted after losing back to back hands against Sergio Aguilar. First, Deeb lost pocket-jacks to ace-king when an ace spiked the river. Two hand later, Deeb called with king-four in the big blind when Aguilar set him in from the small blind. Aguilar’s ace-three suited held.

Adam Johnson was the next to fall, taking home $106,418 for his sixth-place result. Johnson lost a race with pocket-nines against Sammy Lafleur who had ace-queen suited.

Patrick Eskandar was not far behind him, finishing in fifth after three-betting all in from the small blind over Lafleur’s button open. Unfortunately for Eskandar, he ran king-queen into ace-queen and had to console himself with his $141,432 in winnings.

When there were four left, it was Carlos Chang’s turn to leave. He raised a significant part of his stack with jack-ten and reluctantly called the rest when Lafleur set him all-in. He couldn’t find any help against the Canadian’s ace-king but went home $189,584.

Iyer: "I just want to put it in the bank. I don’t want to be a huge spender."

Twenty-five minutes later, he was joined at the rail by Sergio Aguilar. Aguilar had lost most of his chips in the previous hand to Iyer after calling his all in on the river with an inferior hand. Iyer turned over a straight and Aguilar was left with four big blinds and couldn’t spin them up. He netted $256,298 for his result.

Iyer and Lafleur were heads-up with a 2:1 chip lead for Iyer. For the next forty minutes, Iyer steadily chipped away at the stack of the last person who stood in his way. His concentration remained almost unbroken, even with the enthusiastic support of his rail. He did steal a glance at the bracelet when it was brought out and placed on the table next to him.

In the end, with only around twenty big blinds left, Sammy Lafleur limp-called when Iyer set him all in and it was a flip with pocket-sevens to Iyer’s queen-ten suited. By the river, Iyer had made a pair, and it signaled the end of an incredible run for the runner up, who took $349,417 with him for his fantastic result.

With the work out of the way, Iyer celebrated with his friends. Some of them were impatient to head out and party once the winner photos and interviews had concluded. For Iyer though, he seemed to have a very sensible head on his 25-year old shoulders. Though he may well celebrate his win, looking forward, there is only one thing he wants to do with his winnings. He told PokerNews “I just want to put it in the bank. I don’t want to be a huge spender. Just keep playing, keep grinding, go to the next stop.”

Stay with us here at PokerNews for all the remaining bracelet wins of this fantastic 50th annual World Series of Poker. It's almost over, but the best is yet to come. Follow along in the 2019 WSOP Live Updates section.