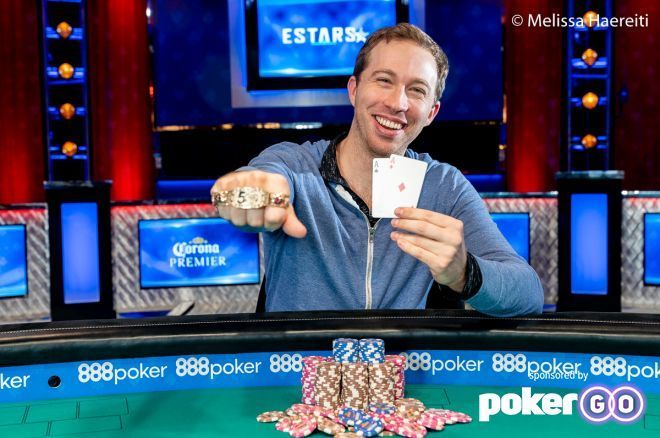 Brett Apter just claimed his first bracelet in Event #17: $1,500 No-Limit Hold’em Shootout after outlasting a field of 917 players. He takes home $238,824, the first six-figure score of his WSOP resume, for his victory. Apter defeated some of the best players in the world, including eight-time bracelet winner Erik Seidel heads-up in Round 2, to make it to the finish line.

When asked how he felt about his win, Apter’s emotions were a rollercoaster, as was his final table run.

"I feel like I’m in a dream. I wanted this ever since I first started playing poker."

“I feel like I’m in a dream. I wanted this ever since I first started playing poker. Ever since I won yesterday, and knew I was going to the final table, it hasn’t felt real. I’ve just been trying to live up every moment at the final table.”

Apter was short for most of the beginning of the day, however, things turned around for him when he won a three-way all in against Anatolii Zyrin and Shintaro Baba. Both of his opponents held ace-king suited, while he held aces in the perfect spot. He scooped the pot to get a decent stack back, eliminating Baba in 7th place and doubling up through Zyrin.

“It started off really tough. I didn’t win a hand for five hours I believe, so I was short for the first 2/3 of the day, and then I got aces against ace-king and ace-king and everything just went from there. I started just climbing up.”

When the heads-up portion of play started, Apter had a 4 to 1 chip deficit. However, that didn’t stop him, from playing his best game and put up a strong fight. Indeed, his patience and game on point paid off, as he eventually found a double with ace-king against Zyrin’s queen-ten, and kept building from there. Soon after, Apter was in the lead, he never let go of it.

"I was just soaking up every moment with all my friends here, playing heads up for a bracelet, and I just knew that I wanted to play my absolute best every second since it was going to be something I would never forget. I wanted no regrets."

Apter doesn’t plan to stop here and is going for more. In fact, he goes back to the grind tomorrow.

“I will be here for the rest of the summer. I will be probably be firing something tomorrow.”

Marko Maher was the first casualty of the final table. Maher three-bet shoved his last thirty big blinds with queens from mid-position but found himself in bad shape against Kenna James' kings. James stayed ahead and Maher was eliminated.

He was followed to the exit by Kenna James in 9th place ($19,436). James moved all in for his last 13 big blind with ace-queen suited and got called by Scarpa who held tens. It was a typical flip situation but Scarpa’s hand got improved to a full house to end James’ fantastic run.

The next player to head to the rail was Michael O’Grady. O’Grady needed to find a spot to double and when the time came, he shoved with ace-queen suited only to find himself in bad shape against Brett Apter’s ace-king. The board was of no help to O’Grady, and he took home $24,973 for his 8th place finish.

Soon After, Shintaro Baba was short and got his stack in the middle with ace-king suited against Anatolii Zyrin who also held ace-king suited, and Brett Apter who held aces. Apter won the three-way all in, doubling up through Zyrin and sending Baba to the rail.

Cary Katz was next to go when he shoved his last five big blinds with ace-three and got called by Apter who held a pair of threes. Apter stayed ahead, and that was the end of Katz’s tournament life.

The very next level, Manuel Rivo was sent to the cage in 5th place. Ruivo called an all-in bet from Zyrin on a six-high flop with jacks only to see Zyrin’s flopped set of fives. The turn and river blanked and that ended the Portuguese's deep run.

Adrian Scarpa was eliminated in 4th place. Scarpa moved all in with ace-eight for his last 14 bigs and was called by Nguyen with ace-five. Nguyen flopped a five and Scarpa couldn’t recover, heading to the rail instead of into 4th place.

"I wanted to play my absolute best every second since it was going to be something I would never forget. I wanted no regrets."

Tommy Nguyen was then eliminated in 3rd place. Nguyen was hoping to grab his second bracelet. However, his shot at another title ended when raised all in on the river after turning two pair, and got called by Anatolii Zyrin, only to see Zyrin’s flopped set.

The heads-up play lasted a long time, and in the last hand of the night, Anatolii Zyrin moved all in on the flop with top pair and was snap-called by Apter who held a pair of aces. The turn and river bricked and Zyrin was sent home as the runner-up as Apter claimed the title.

PokerGO's Cary Katz had to do with sixth place, shown live on the streaming platform he created. The next event broadcasted live, is the final table of the $10,000 Omaha Hi/Lo event with Robert Mizrachi in the lead.