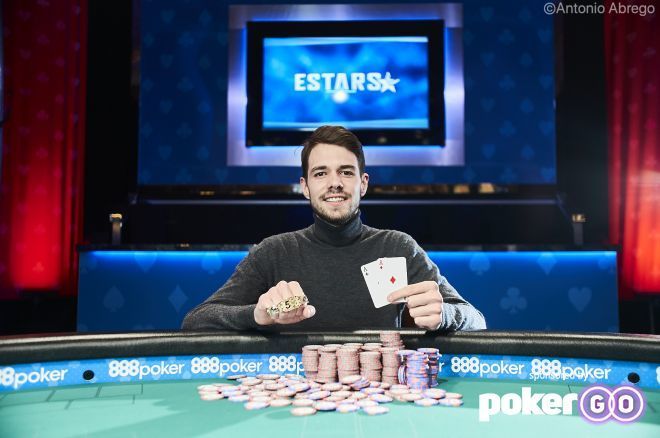 Frequent chants, shouting in various languages and crazy celebrations came from the corner of the Amazon room as Event #69: $1,000 Mini Main Event reached a sizzling conclusion at the Rio All-Suite Hotel and Casino. In a nutshell, it was exactly what poker enthusiasts are used to from ESPN and their coverage of the annual $10,000 WSOP Main Event.

Yet, it was not about life-changing seven-figure scores for all finalists, but a raw mix of emotions as poker pros and recreational players were hoping to claim the latest coveted gold bracelet at the 2019 World Series of Poker. There was nothing “mini” about the first-time event either, as a staggering 5,521 unique players created a massive prize pool of $4,968,900.

With seven different nationalities represented among the final eight, it became an international affair with the French and Chinese flag, as well as an Argentinian football jersey, adding to the final table atmosphere. It was undoubtedly the loudest rail out of any events so far, and the entire Amazon room would know when a key hand took place.

Ultimately, it was 27-year-old French poker player Jeremy Saderne that claimed the top prize of $628,654, his first-ever bracelet and the second WSOP bracelet of the summer for his home country. Saderne, who resides in London, was supported by a boisterous and packed French rail whose celebrations could be heard throughout the entire Amazon room while Day 1a of the $10,000 Main Event was going on, giving everyone a taste of what's sure to follow in the two weeks to come.

“I feel very good, I cannot imagine winning a tournament with more than five thousand people, especially in this one when the tournament is very fast. You have to have good cards or a good setup and I just ran so good and had two times aces in the last hands,” an overwhelmed Saderne said in the interview after his victory.

He had to overcome an unusual opponent in heads-up, as Lula Taylor blasted her way through the tournament with a very aggressive playing style, not bowing down to any kind of intimidation. She was simply having a hoot, soaking in the entire experience and cracked jokes every other minute to entertain her opponents and everyone on the rail. Her opponents clearly enjoyed her enigmatic presence, which showed when Taylor knocked out Koji Takagi in fifth place with a rivered two-outer. Whereas many a player would head-shakingly depart after such misfortune, Takagi and Taylor warmly embraced each other instead.

"She is so fun at the poker table, she played very aggressively without any fear about the final table or poker in general. She was so nice with me, she told me she'd like if I were her son. We began to speak not just about poker cards. It is very rare to have a person like Lula at the table," Saderne pointed out.

In the final hand of the tournament, Taylor and Saderne stood together behind the table, holding hands as they awaited their fate to be dealt. The Frenchman prevailed with pocket aces and once the celebration had culminated, Saderne's rail started chanting "Lula! Lula!" over and over again to give her well-deserved credit after an extraordinary performance.

She was so nice with me, she told me she'd like if I were her son.

One key hand would change the outcome of the final table. With three players left, it was Saderne who had previously doubled through Taylor to take the lead, but Taylor immediately doubled back before an ordinary flip with king-ten for Taylor and pocket sixes for Saderne caused a roller coaster of emotions. Taylor flopped the king in the window, but Saderne spiked the two-outer on the river to survive, causing the French rail to erupt in loud cheers.

“I was just waiting for my bustout. It is very long to have the turn and the river on a final table. I was out but I stayed. When I hit the six, I was so shocked. If I don't hit the river, I finish third and twenty minutes later I win the tournament,” Saderne said.

Seven hands later it was all over, as Saderne picked up pocket aces twice to send WSOP bracelet winner Andres Korn and Taylor to the rail in quick succession to cause another outburst of emotions and celebration behind him.

“All of my friends were here. It was incredible, I have never seen that before. It was better than in the Marseille stadium [Stade Velodrome] and I am very thankful. I just want to say thank you to all of my friends, they gave me a lot of power and energy, they were incredible.”

That brings an end to the PokerNews updates from Event #69: $1,000 Mini Main Event, but the highly anticipated $10,000 WSOP Main Event is already underway and you can find all the action right here until a champion is crowned on July 16th, 2019.