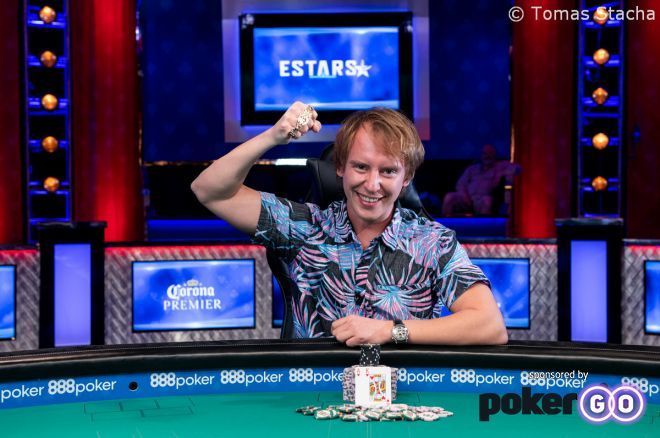 There is a reason why they call it "a marathon" and on Day 6 of the 2019 World Series of Poker (WSOP) Event #26: $2,620 No-Limit Hold'em Marathon the 1,083-entry tournament lived up to its name. An epic heads-up battle resulted in Russian online poker pro Roman Korenev capturing his first WSOP gold bracelet and a payday of $477,401.

Korenev defeated Minnesota's Jared Koppel, who came into the day as the overwhelming chip leader but the heads-up battle was nothing short of exciting. The pendulum swung back and forth multiple times and both players had their opponent on the brink of elimination. Korenev got things started when he got all of his chips in the middle with pocket sevens against the pocket queens of Koppel. A seven on the flop gave Korenev a double up and the match was on.

"I feel great! It was a long way to this result. I have nothing to say, no words."

In total, there were 12 double-ups once the heads-up match got underway. Five of the first eight were a result of the short-stack getting it in behind but finding a way to catch up. On the 13th all-in of the match, Korenev finally had Koppel on the ropes. Koppel flopped top pair with a straight draw but Korenev turned a higher pair when all of the chips got in the middle. The river improved Korenev to two pair and his Russian rail exploded into cheers and chants.

"I feel great! It was a long way to this result. I have nothing to say, no words," an overjoyed Kovenev said. "Dreams come true."

As for Koppel, he walked away with a prize of $295,008 but will have to wait for another day to get his chance at a coveted bracelet. For Korenev, it seems fitting that he captured his largest career prize at the WSOP in Las Vegas given how much success he's had in the past. Back in 2016, Korenev cashed in eight different events and followed that up with four cashes in 2017 and 2018 each. This is his second cash so far this summer and it surely will be one he will never forget.

When asked about the back and forth heads-up match, Korenev did not want to relive it.

"I don't want to talk about this," he grinned. But as for the Marathon-themed event, he said he felt comfortable in that environment. “With the longer levels you have the option to make more mistakes, and let people make more mistakes. It also helps for periods when you’re card dead. It’s better for professional players, for sure.”

What's next for the Russian player that plans on staying in Las Vegas all summer?

"Next bracelet!" he said with a loud chuckle.

Only six players returned to the felt for the live-streamed final table on Saturday and the action got off to a bit of an awkward start with Dong Sheng Peng not arriving til around the 10th hand of the day. That didn't seem to slow any of the action down though, as there were many all-ins in the opening hour.

Joseph Liberta came into the day as one of the shorter stacks and he got all of his chips in the middle in a dominated position blind vs blind against Korenev. Despite seeing his live card in the window, Liberta was quickly disappointed to see that Korenev flopped a bigger pair. Liberta was unable to find any help on the turn or river and became the day's first casualty.

It was only moments later when short-stacked Joe Curcio got the last of his seven big blinds in the middle with pocket aces. He was called by Francis Anderson's queen-ten who flopped a pair of queens. The turn card was a ten to give Anderson two pair and Curcio was sent to the payout desk in fifth place. As for Anderson, he didn't last much longer. He wound up getting 30 big blinds in the middle with pocket nines against Korenev's pocket sixes. Unfortunately for Anderson, Korenev was running too pure as he spiked a six on the flop to send Anderson home in fourth place.

For the man who didn't get much time at the feature table, Peng also didn't have much luck go his way. He quickly became one of the short stacks and he shoved all in for around 17 big blinds from the small blind. Korenev woke up with pocket kings in the big blind and Peng was drawing extremely slim. While he picked up a straight and flush draw on the turn, the river bricked off and Peng was eliminated in third place. So within 90 minutes, the field was quickly whittled from six players to just two.

Lots of people thought this could be a quick final table, but as stated above, they couldn't have been farther from the truth. It took well over five hours for the heads-up battle between Korenev and Koppel to come to an end but at least there was no shortage of excitement.