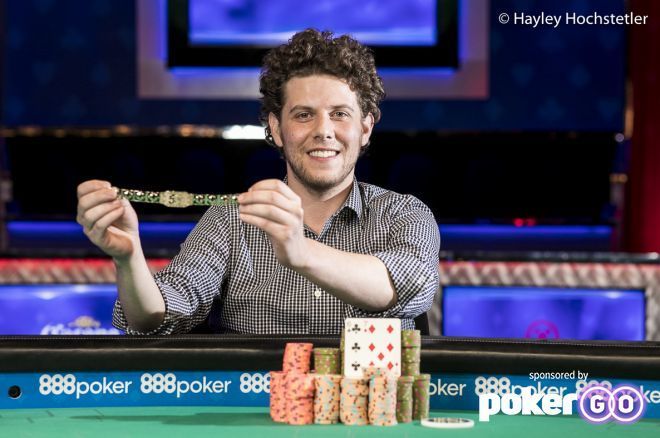 Ari Engel has emerged victorious from a field of 996 to take down Event #48: $2,500 No-Limit Hold'em and claim his first WSOP bracelet. With nine WSOP Circuit rings to his name and 15 years of WSOP experience, Engel had never bagged a bracelet at the World Series of Poker until today.

"It’s a relief to not mess it up, because usually, I mess it up."

“Never give up,” was his advice. “With us huge field no limit players, you play these expecting to win one in a lifetime. It’s a relief to not mess it up, because usually, I mess it up.” The self-deprecating champion acknowledged his able heads up opponent Pablo Joaquin Melogno, saying that when they reached the final table, he thought, “I'm going to try to get heads up with him and then he’s going to win it.”

That turned out not to be the case, as two huge hands in a row at the bitter end turned the tables on his experienced Uruguayan rival to hand Engel the $427,399 top prize and winner’s jewelry. On how it felt to win such an event in a field dotted with former champions, Engel said, “The competition in this was way tougher [than the Circuit]. It means more from the poker accomplishment perspective.”

Day 3 began with 24 players still in the running for the title, but there was a flurry of early eliminations including those of double bracelet winners Mark Radoja and Kristen Bicknell to condense the pack, redrawn onto two tables.

It was at this point that Baitai Li, chip leader since the end of Day 1, began to lose ground, with Engel (who busted Barny Boatman in eighteenth with kings vs. eights) and Ryan Olisar edging in front of him while every large pot that Li contested ended up being shipped to someone else.

Josh Arieh was also building stacks, taking two scalps in a row in level 22, cracking Gal Yifrach’s queens with some quads-spiking pocket sixes to bust him in seventeenth, and then watching his overpair (jacks versus tens) hold to send Jose Brito to the rail in fifteenth place ($15,058). Li himself ran ace-queen into the pocket kings of eventual finalist Truyen Nguyen to bust in fourteenth place.

Not long after, Michael Finstein (twelfth for $23,828) exited and as the final two tables’ action slowed down approaching the final table bubble, Engel increased his chip lead, busting Pedro Marques with a fortunate queen-seven of hearts spiking a seven against his opponent’s ace-queen of diamonds.

Just missing out on a place at the final table was Harald Sammer, sent packing in a massive three-way preflop all in, in which Engel was involved but not victorious. The winner of that monster pot was Wilbern Hoffman, his aces seemingly cracked when Sammer flopped two pair with queen-ten suited only for a counterfeiting river pair to grant him a triple up. Hoffman sailed on to his first WSOP final, having only started playing poker last year.

A third of the final table’s competitors had already claimed a bracelet – in the case of Ben Keeline and David "Bakes" Baker, two apiece. Arieh’s hopes of scoring the double were soon ended, however, when Ben Keeline (who had navigated his short-to-medium stack from the start of Day 3 all the way to the final) picked up kings when Arieh shoved with ace-queen and busted him in ninth.

At this stage it was Melogno who increased his stack most steadily, recovering from the few losses with unflappable composure. After Olisar lost his final flip with Engel to exit in eight place ($39,980), his eliminator went on to claim four more scalps at the final, starting with Nguyen, again a considerable flip pitting jacks against ace-king. Engel’s jacks held; Nguyen picked up $52,909 for seventh. James Hughes, who had hung on with determination to a very short stack since the two-table period, finally got it in with

Engel returned to race-winning form, busting Baker in fifth when his pocket sevens held against Baker’s overs as the latter announced his all in as if he was in a TV commentary booth. Bracelet-holder Keeline was eliminated in fourth soon after, collecting $133,306.

Action hardly slowed after this, with big pots traded between the final three players, none of them desperately short or willing to sit on their chips for long. It was Hoffman who finished in third ($186,392) after a huge pot saw him all in on the turn with a flopped two pair against Melogno’s straight and flush draws. The latter came in for Melogno, giving him a 3:1 chip lead going into heads up play.

Engel won the first three pots in a row after the restart, the last one a large full double which left Melogno playing just seven big blinds. Most of the chips in play went in the middle on a king-ten-four flop, Engel making the final, largest bet with ace-queen and being called by Melogno with top pair – king-nine. Engel turned a flush draw with the eight of hearts on the turn, but it was the card of the tournament for him on the river, the straight-completing jack of diamonds.

The very next hand; Engel shoved his button with seven six off, and he was called by Melogno with a dominating jack-six off but the day belonged to Engel; he flopped a seven, and it was all over. Melogno picked up $264,104 for second place, while Engel gained a bracelet, $427,399, and “confidence," if not for too long.

“I lose my confidence very easily so I should be good tomorrow, for at least one day,” Engel said. His plans for the Series remain the same after his win, which many of his fellow players stated has been on the cards for a while now. “I sucked out so many times in this tournament, it’s ridiculous,” he noted, but luck is part of the game, and today it was on the experienced Canadian’s side. After Joseph Cheong, Daniel Strelitz, Luke Schwartz, and Stephen Chidwick, another great poker player won their first bracelet!