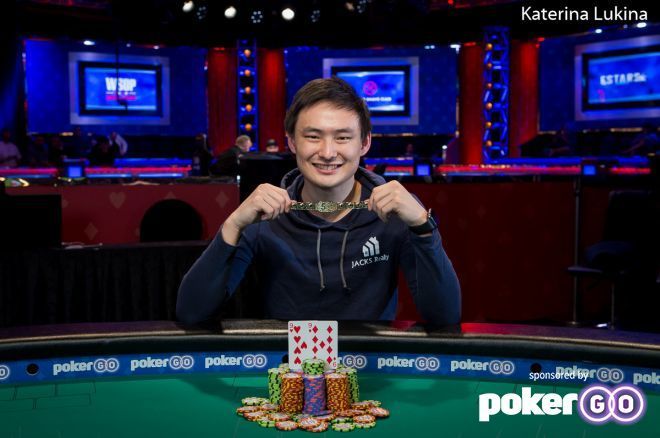 Stephen Song entered the day with nearly half the chips in play at the beginning of Day 3 of the 2019 World Series of Poker Event #28: $1,000 No-Limit Hold’em. His sights were set on the first place prize of $341,854 and the opportunity to earn his first career WSOP gold bracelet.

“It’s surreal. I don’t even know. The money’s insane. WSOP summer is where you can actually make life-changing money. It’s pretty unreal,” Song stated in his interview after the tournament.

Finishing runner-up to Song was Scot Masters of Kenova, West Virginia, who bowed to Song after a short heads-up. Masters outlasted several notables including bracelet winner Ryan Laplante, who came in third for $154,268, and rising Brazilian star Renato Kaneoya who finished fourth ($113,712). The tournament attracted 2,479 participants and created a total prize pool of $2,229,300.

It took well over three hours of play and 129 hands for Song to emerge victoriously. When asked about his strategy in a large-field tournament, he stated that his main focus was to go for chips and accumulate a stack early on in the tournament.

The journey to victory wasn’t all smooth sailing, however, for the Connecticut resident. On the tenth hand of the day, he found himself hit the second-nut flush on the turn only to run into the nut flush of Kaneoya. He still had a sizable chip lead, though he saw Kaneoya and WSOP bracelet winner Laplante consistently add to their stacks as the afternoon went on.

On Hand #55, Song found himself in a three-bet pot on the flop against Kaneoya. He barreled the turn and was unable to get Kaneoya off a better hand, resulting in a virtual tie atop the leaderboard. On the following hand, Song attempted a three-barrel bluff with king-nine offsuit that was picked off by Masters, sending Song into third place in chip counts for the time being.

The turning point of the tournament came on Hand #99, when Song defended his big blind against Laplante’s raise from the button during three-handed play. Their flop was two-tone with two aces and a queen on it and Song checked to Laplante, who made a continuation-bet of 400,000. Song then check-raised to 1,400,000 and was met with a three-bet to 5,750,000. With the decision effectively being one that would ultimately put Song to the test for his tournament life, he shoved all in and was quickly called. Song tabled a flush draw and was behind the trips of Laplante but improved to a flush on the turn and was able to hold and secure a double up while regaining a big chip lead.

Song ultimately knocked Laplante out in third place ($154,268) when his ace-jack suited held versus Laplante’s ace-six suited in an all-in preflop situation.

He was then heads up with around 80 percent of the chips in play, and the match against Scot Masters (2nd place, $211,177) lasted just 10 hands, with the culmination being another all-in preflop situation between the pocket nines of Song and Masters’ pocket fives. Song flopped a nine and had Masters drawing dead on the turn as the two shook hands while the dealer turned over the meaningless river card.

Moving forward, Song plans to invest a lot of his winnings. “Already I invest most of my winnings with my parents,” said Song. “My dad’s like the smartest guy I know.”

The money to be won in poker has always been a prime motivator for his success, though he does not plan to stop playing any time soon. When asked if he will be playing this year’s Main Event, he confirmed that he would be. “I will probably play in the Main Event hopefully every year for the rest of my life, but we’ll see.”

PokerGO is your destination for all final table live streams from the 2019 World Series of Poker. Sign up for $10 a month or $99 a year via PokerGO.com!