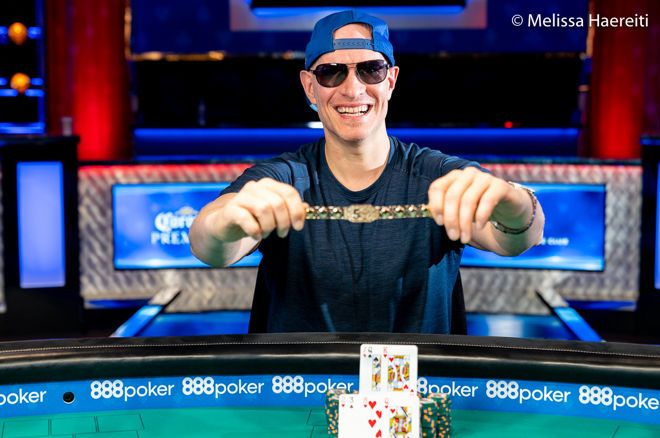 He was all in with bottom pair. No kicker. No fold equity. And it worked out magnificently. Greg Mueller got it right. He survived the critical situation and catapulted himself back to a playable stack in Event #29: $10,000 H.O.R.S.E. Championship. A few hours later, Mueller closed it out. He captured his third WSOP bracelet and the $425,347 top-prize, defeating a field of 172 entries.

In 2009, Mueller won his first bracelet. It took him only two weeks to claim his second. For number three, he had to wait ten years.

"A good attitude, a fortune of good luck, and good friends around made the difference."

"A good attitude, a fortune of good luck, and good friends around made the difference," Mueller said.

Mueller's first two wins came in limit hold'em, and today was a testament to his success from the previous decade. Mueller's triumph was largely influenced by one particular play in limit hold'em.

With three players left, Mueller was nearly on his way out. He had fewer than four big bets, but an unorthodox play with five-three offsuit changed the fate of the tournament. Mueller check-raised a flop with bottom pair. Then he faced a bet from Dario Sammartino on the turn with the board featuring straight and flush possibilities. Mueller check-shoved without the smallest chance to make Sammartino fold. He trusted his instincts, and it paid off.

It all came down to a tell.

"Technically, I'm dead. What can I beat? I just looked at him. He doesn't have a hand!"

Sammartino bricked the river with a double gutter, and Mueller's epic ride towards glory begun. It's one thing to get a value from a good hand, but make a double out of nothing; that is a massive confidence boost. With Mueller's history as a former professional athlete—he played hockey in Germany for nine years—the spirit can become crucial.

"I got instant confidence and swagger."

Mueller called it a turning point, and while there was still a long road ahead of him, it seemed that the script had been written. Mueller suddenly started to make good hands, and he built his stack to overtake the chip lead.

Shortly after dinner, Mueller busted Sammartino in a hand of stud hi-lo, and the subsequent heads up lasted just one hand. Mueller made a flush to eliminate Daniel Ospina in second place.

While Mueller admitted that he doesn't have as much passion for poker as he used to, today's victory is an outcome of his grind off the felt. "I put a lot of effort not so much into studying the game, just into my own physical and mental state."

For Mueller, it's all about feeling good and following his healthy routine. He said he wouldn't run from tournament to tournament, trying to chase cashes and POY points as hard as many professional players at WSOP. That's why he doesn't have a strict plan.

Will he play the Poker Players Championship? Likely. But Mueller won't make any promises. Everything is a game-time decision. If he wakes up and thinks that he'd rather have a day off, he'll take it. There is no must-do on Mueller's mind.

"I just thought, 'Do I still have it? Has that game passed me by?' and I told myself that I will play a little bit and that I'll be focused."

"When I'm in Canada, I don't play one hand of poker. I do my thing: work out, play hockey three times a week, watch a ton of sports."

However, when the clock was ticking for the start of the 50th Annual World Series of Poker, something bugged Mueller's mind. His best results seemed to have been a thing of the past. Just like what happens in the career of professional athletes, Mueller started to question whether his shine at the felt was over.

"I just thought, 'Do I still have it? Has that game passed me by?' and I told myself that I will play a little bit and that I'll be focused."

And so Mueller did come and found his answer: he is still able to compete in one of the most complex tournaments on the WSOP schedule. Heck, he can win it outright.

PokerNews coverage of the 2019 World Series of Poker is sponsored by PokerGO. Sign up for $10 a month or $99 for the year, and watch a massive library of poker content, including the majority of all WSOP final tables this summer!