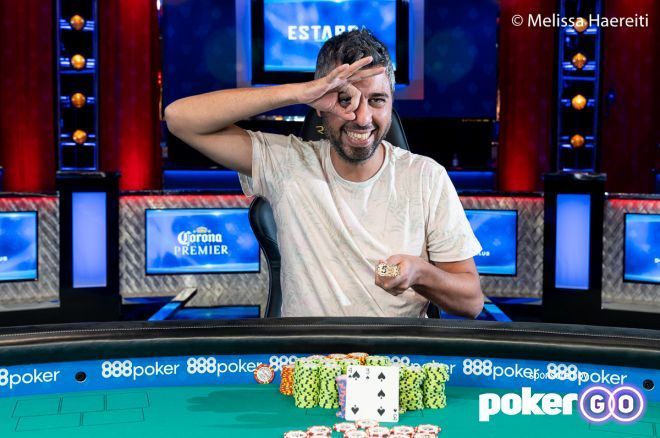 Arguably one of the most anticipated tournaments of the series has come to an end and a new champion has been crowned in Event #44: $1,500 No-Limit Hold'em Bounty.

"Being here for the summer wasn't easy for me and it's not easy for them, and this really makes it worth it, it's really special for me."

The field started with 1,807 players that walked through the doors of the Rio All-Suite Hotel and Casino, and when the tournament had come to an end, it was Asi Moshe who took down the tournament for a staggering $253,933 as well as a shiny new WSOP bracelet to add to his collection.

"It really feels amazing, each one feels so different. This year the traveling was really hard. I have a wife and a daughter, who is two and a half, and I love them both so very much, so being here for the summer wasn't easy for me and it's not easy for them, and this really makes it worth it, it's really special for me."

Moshe came into Day 3 second in chips and instantly started to stack chips when he got in a three and four-bet pot before all the chips got in the middle preflop against Joshua Gottesman. Moshe was ahead with pocket nines until Gottesman's big slick paired on the turn. The river, however, was not on Gottesman's side as Moshe rivered a set.

Moshe wasn't done there as shortly after he got all his chips in the middle once again, this time he held pocket kings against Thiago Macedo 's ace rag. Macedo was unable to pair his ace and Moshe claimed another early knockout to start the day.

Moshe wouldn't stop there as he claimed another bounty when he spiked a king-high flush on the turn to send Matthew Volosevich and his wingless ducks out the door. Benjamin Chalot would be next on the Moshe bounty list when he couldn't pair either his king nor jack and ace-high was all it took to send Chalot on his sailboat home.

Bastian Fischer would be Moshe's first victim at the final table. Fischer shoved all in from early position got a call from Tonio Roder and Moshe re-shoved to get heads up against. Fischer was drawing dead after Moshes turned a set of hooks and he took the first exit on the final table of nine.

Triple Crown winner Harrison Gimbel was the next casualty after he shoved his queen-nine offsuit into Vitalijs Zavorotnijs pocket jacks and that was all she wrote for the former bracelet winner being eliminated in eighth place.

Zavorotnijs would claim another victim at the final table when Timothy Stephens ran his ace-queen suited into the former's rockets. Stephens was drawing the world with flush and broadway outs headed to the river but couldn't hit and he was sent out the door.

Nine hands later would see Andrew Hills exit as he shoved his ace-eight into Damjan Radanov dominating ace-ten off. Hills was drawing dead on the turn after Radanov paired his ten on the flop and rolled out in sixth place.

The start of five-handed action saw some big hands between Zavorotnijs and Moshe that ended with Zavorotnijs on the losing end when he jammed ace-queen suited into Moshe's ladies. Moshe boated up on the river sending Zavorotnijs home in fifth.

I think even at one point I was the shortest stack when we were three-handed and I tried to take it one spot at a time."

That wouldn't be the end of Moshe's dominance as Patrick Troung was next on the hit list when he decided to risk his tournament life with pocket threes after Moshe had raised under the gun. Troung's pocket pair went down the drain on the flop when Moshe paired his ace-jack's ace and he took a fourth-place finish.

Moshe went into three-handed play with a 7:1 chip lead over both of his opponents until the momentum changed ten hands in when Tonio Roder's ace-jack hit Broadwayon the turn that paired Moshe's ace-queen. Two hands later, Moshe would double up Radanov and his pocket jacks and just like that, his 7:1 chip lead was gone.

"I really just tried to disconnect from the positives and negatives in poker. I think even at one point I was the shortest stack when we were three-handed and I tried to take it one spot at a time."

Moshe would gain back control after two family pots would put him back to a 3:1 chip advantage. Four hands into Level 35 saw Roder three-barrel bluff into Moshe's pocket aces and just like that the German's tournament came to a crashing end in third place.

The heads up battled started Moshe having a lead until Radanov found a double with pocket jacks. Five hands later, the two would have all their chips in the middle once again when Moshe put Radanov all-in from the small blind.

"I really want to say, and this is important, I really love my wife Erga and my daughter Mika, this is for them."

"I think it was standard, we are playing big blind ante and you want to shove with a lot wider variety when he has twelve big blinds", when asked about what would be the final hand of the evening.

This time, Radanov didn't have a made hand but his ten-eight suited was ahead of Moshe's four-three suited. The flop was good for Radanov as deuces paired the board with a queen and turn came another queen. Radanov was one card away from turning this heads-up match around until the dealer threw a four on the river and as fate would have it, Moshe claimed his twenty-fourth bounty of the tournament as Radanov was eliminated in second place, with the rail from Israel started chanting "Asi Asi Asi“

"I really want to say, and this is important, I really love my wife Erga and my daughter Mika, this is for them."