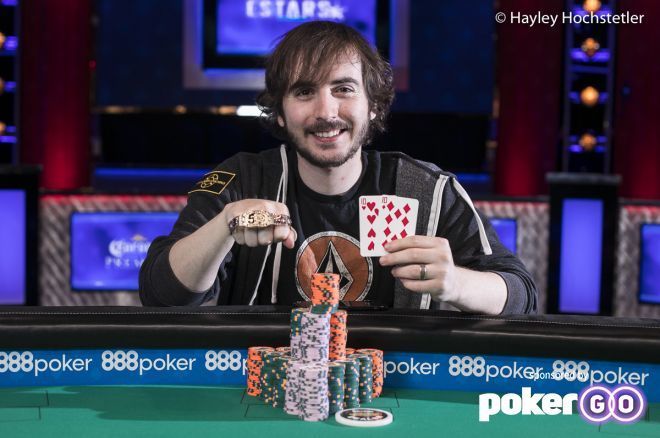 After ninety-nine hands on the final table in the Amazon Room on the Thunderdome stage in the Rio All-Suite Hotel and Casino, Daniel Strelitz was the one to claim his first WSOP gold bracelet and the first-place prize of $442,385. More than 400 players showed up for Event #11: $5,000 No-Limit Hold’em during the 50th Annual World Series of Poker and in the end, Strelitz defeated Shannon Shorr heads-up.

“I’m feeling pretty good, I finally got it off my back," Strelitz said in his post-tournament interview. "I came close a few times so it was kinda disappointing but it wasn’t like I was desperate for one. It wasn’t a void in my life or anything. It’s just a massive relief, I’m super happy.”

"All my friends have bracelets and they have been needling me about the bracelet winners event this year."

About his parents, who were right there cheering him on during his win, Strelitz said: “It’s awesome, my parents are my biggest fans. All my friends have bracelets and they have been needling me about the bracelet winners event this year. And now they’re saying that they have a ride to the event cause I’m the car. So, they don’t get to needle me anymore.”

Strelitz came into the final table as the second-shortest stack but managed to overcome all the hurdles in the end. “Yesterday I had about a third of the chips with seven players left and then I lost an insanely large pot to Shannon. I am kinda glad we ended the night after that, I got to get some rest and recover. I’m here now, just play my stack, and go forward.”

The day started with five of the six players in their seats. Ali Imsirovic missed the first ten hands in which Strelitz found his first double-up through Shorr with ace-king which might have been the kick-start to his climb in the chip counts. Arsenii Karmatckii came into the day as the absolute short stack with 13 big blinds and got them all over the line with deuces.

Imsirovic called with ace-nine and turned two pair to eliminate the Russian in sixth place for his fourth biggest live tournament cash ever to take him to almost $1.4 million in lifetime cashes according to The Hendon Mob.

Strelitz doubled up again for eleven big blinds through Shorr before Maria Ho was eliminated by him. Ho had put her tournament life at risk with pocket eights while Strelitz had called with kings. No help came for Ho on the board as Strelitz improved to a full house on the river. Her sixth WSOP final table came to an end in fifth place, taking her closer to the $4 million mark in lifetime live tournament earnings.

Ognjen Sekularac got short after doubling Strelitz up when he three-bet shoved with king-five and Strelitz called for 40 big blinds with pocket tens. The tens held up to leave Sekularac with less than a million in chips. Imsirovic and Sekularac kept clashing with the latter coming out better and Imsirovic shorter but it was Strelitz who dealt the final blow to Imsirovic. His pocket nines couldn’t beat the pair of tens Strelitz had flopped and the Bosnian was sent to the payout desk in fourth place.

Five hands later, Sekularac couldn’t win his final all-in as Shorr’s four-bet had put him at risk when he called with king-queen. Shorr held ace-jack and picked up the gutshot to Broadway on the flop, which he hit on the turn. It also gave Sekularac outs to a full house as he turned two pair, but he bricked the river as the deuce fell to end his run.

After an unscheduled break, the players started the heads-up with pretty similar stacks. Shorr was ahead with 102 big blinds while Strelitz had 97. Even though the chips were going back and forth at the beginning, soon Strelitz took hold of the lead and kept increasing it.

“It was insane how good I ran. I barely had to bluff. I just kept getting good hand over good hand.”

Shorr ended up shoving it all in for his last 16 big blinds when Strelitz had raised and was called. Shorr held queen-four and was up against the pocket tens of Strelitz.

Shorr found a four on the flop but no further help came as he was eliminated in second place for his third-biggest WSOP cash ever at his fourteenth WSOP final table. The two players congratulated each other with their results, and Strelitz admitted he ran quite well.

“It was insane how good I ran. I barely had to bluff. I just kept getting good hand over good hand.” Strelitz said at the end. You can watch his winner interview with Oliver Biles below: