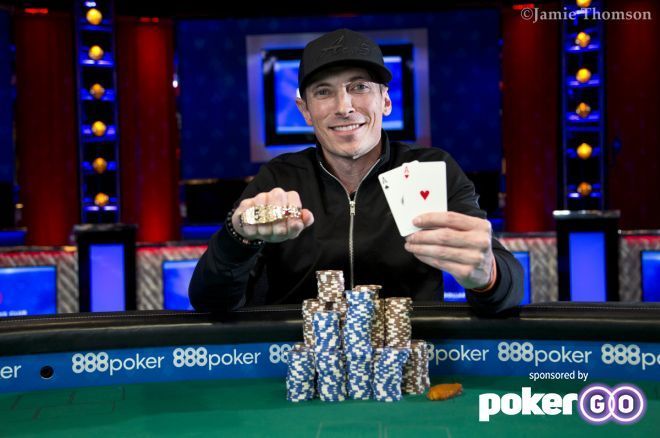 It took three days for a field of 2,808 to be whittled down to one, and in the end, it was Salt Lake's Robert Mitchell who captured his first ever WSOP gold bracelet in Event #37: $800 No-Limit Hold'em Deepstack. The 41-year old claimed the first-place prize of $297,537, the largest slice the nearly $2,000,000 prize pool had to offer. The American caught a hot streak of cards early on the final day and rode it all the way to the eventual gold.

Not for the first time this summer, the tournament was finished off in style: holding pocket aces for the eventual winner. Mitchell's sole remaining opponent Marco Bognanni raised it up with pocket threes and Mitchell put in a three-bet with the blades. Bognanni whispered the two words everyone holding aces wants to hear:

"To have one now on my resumé feels good and it gives me more validation as a poker player."

The four-bet shove was for more than fifty big blinds and a pot of nearly all the chips in play. The call followed quickly.

Sweated by a large group of friends, after each of them hastily made their way to the Amazon room to rail their buddy, they saw five blanks roll off the deck. Mitchell jumped in the arms of his ecstatic rail, high-fived every single one of them and was lifted onto their shoulders.

The accomplishment means Mitchell can now call himself a WSOP gold bracelet winner. Validation is the first thing that sprung to the new champ's mind, although his love for the game outweighs the now-complete chase for WSOP gold.

"Obviously, the money is surreal, but that's what poker players play for - the bracelet. To have one now on my resumé feels good and it gives me more validation as a poker player."

With someone sporting a love for the game as Mitchell does, his plans with the unexpected windfall of nearly $300k are clear: it's business as usual.

"I'll be here for the rest of the series. I'll just be grinding, going back at it."

Mitchell was coming off a 17th place in Event #17: No-Limit Hold'em Shootout, which meant he won his first table and got close to winning the second.

"Actually, that Shootout helped me a lot, getting so close to a bracelet," Mitchell said. "I kind of played a little too fast three-handed. Here, I realized I was gonna pick my time, be in the moment, and play my best game. That tournament helped me win this one."

Whereas some others might feel a deep run like that may not happen on short notice - or ever again - the Shootout bolstered Mitchell's spirits that he was close to winning the big one.

“One-hundred percent it did. I knew I was going to have another shot at it. I’ve been playing poker for a long time and felt like it was long overdue. It’s awesome.”

While his spirit was high, the cards certainly fell Mitchells way too. Especially in the early stages, it seemed he could do no wrong as the field of twenty-six that started the day quickly got whittled down to twelve in the early stages. Mitchell, who started the day with just twenty big blinds, quickly working his way up to the biggest stack overall after winning several key coin flips.

Start-of-the-day chip leader Hamid Feiz was one to fall to Mitchell and finished in fifteenth place when Mitchell check-raised a king-high flush all in on the river. Feiz called, mucked his cards, and saw a depressing day for him come to an end before the big money was divided.

"I'll be here for the rest of the series. I'll just be grinding, going back at it."

The final table officially consisted of two previous bracelet winners - Nick Jivkov and Benjamin Moon - but it would only be the latter that took a seat on the Amazon Thunderdome stage. Jivkov was knocked out at the same time Josh Boulton busted on another table, and Jivkov took ninth place without playing a hand at the final table.

Zachary Mullennix ran threes into ace-ten to bust in eight. There would be no repeat performance for Moon either, as he ran his pocket nines into Axel Hallay's pocket tens to bust in seventh.

Six players made themselves up for a final table live streamed on CBS All Access. Despite the deep-stacked play allowed by the structure, Kamel Mokhammad quickly fell to Mitchell by jamming his jack-ten into Mitchell's ace-ten. Bognanni then snapped off Benjamin Underwood in fifth with a flopped full house against a rivered straight. Not too long after, Francois Evard bowed out in fourth after whiffing ace-queen versus Hallay's fives.

"It's such a surreal feeling to have everybody here on the side. I've known the guys for a long time, throughout the Salt Lake community, it was an awesome feeling."

That left Hallay, Bognanni, and Mitchell to duke it out three-handed with deep stacks. The trio did so for hours on end, with nearly equal stacks at some point. About sixty hands after Evard's bust, it ended up being Hallay who broke first. The Frenchman, backed by a boisterous rail of countrymen as is tradition, three-bet shoved ace-jack over a Mitchell open, only to be snapped off by ace-king. Five blanks later, the field was heads-up.

With more than fifty bigs for each player and hour-long levels, a long grind seemed to loom for both. Instead, some perfect timing with aces gave Mitchell his victory soon into the heads-up battle. There was only one thing he could think of; he ran to his rail and celebrated the improbably-quick victory with his friends.

"It's such a surreal feeling to have everybody here on the side. I've known the guys for a long time, throughout the Salt Lake community, it was an awesome feeling. I was so happy I could win it for them too."

Robert Mitchell's triumph was broadcasted live via PokerGO. Sign up for $9.99 a month or $99 for the year, and watch all the poker content you can ask for! For final table hand-for-hand coverage and all other hand histories, check the PokerNews live reporting page.

How to Play Your First Slots Tournament