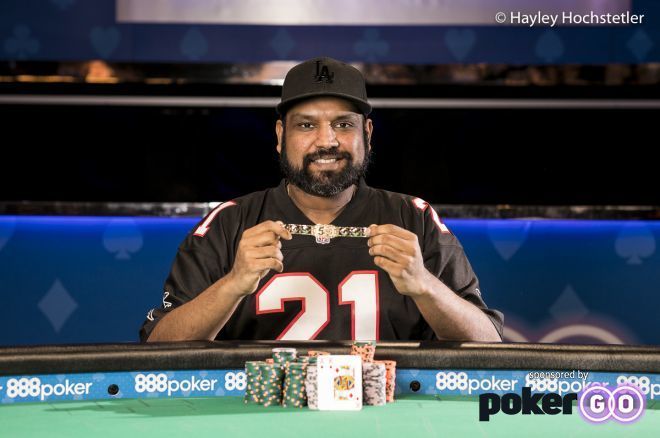 On the final day of the 2019 World Series of Poker, Anuj Agarwal took down one of the last WSOP gold bracelets of the summer by beating 271 other players in Event #86: $10,000 No-Limit Hold'em 6-Handed Championship.

Agarwal took home $630,747 for his biggest-ever career cash, more than doubling his total amount of recorded live cashes by beating Australia's Kahle Burns heads up. Burns had to settle for $389,832 on his first WSOP final table on American soil.

Fueled by a deep run in the 2019 WSOP Main Event, where he ended up in 123rd place cashing for $59,295, Agarwal said: "It feels great to do well back-to-back in $10k events. I had a little bit of a sour taste in my mouth from the Main. I made a small mistake, but overall I felt like I played really well for the six days, and I wanted to continue as I could feel objectively I was making good decisions."

"It feels great to show [my parents] this after the support I had."

Rewarded with his maiden bracelet win, Agarwal cited his relationship with his father, who he immediately called after he won the tournament, as one of the foundations of his poker support.

"My Dad has been my biggest supporter despite not knowing anything about the game. He followed my ups and downs in the Main and they have never made me feel like poker was an unsure thing to do. It feels great to show [my parents] this after the support I had."

Start-of-day chip leader Gal Yifrach is a personal friend of Agarwal. Both of them managed to collect loads of chips but Agarwal didn't let any of his feelings about his friend change his decision.

"We were both chip leaders so I made standard decisions. When I had the chance to knock him out with tens against queens I took it. Of course, we are rooting for each other as friends but if you try to incorporate that dynamic into your game, it's going to mess with your mind and regret it. We both know it's a gamble, and I bluffed him twice, so I'm glad we didn't let it affect us. As a professional, when you are at the table you have to focus on yourself."

Out of 272 players that entered, only six were left on the fourth day in the last championship event the 2019 World Series of Poker had to offer. Yifrach started the day as the chip leader but faced fierce opposition, as can be expected in a championship event.

It only took eight hands for the first elimination to take place at the final table. Ben Heath, who won a bracelet earlier this summer for a little under $1.5 million, departed in sixth place after coming in as the short stack. Heath ran queen-jack suited into the pocket kings of eventual champion Agarwal, taking home $85,915 for his efforts.

Burns eliminated Dong Chen in fifth only a couple of hands later, moving him up on the leaderboard in the process. Chen open-shoved on a king-six-three flop with two diamonds, where he put his last 22 big blinds in the middle with ace-four of diamonds. Burns took his time before calling with pocket sevens. Chen missed his flush draw and overcards, departing in fifth with an extra $120,828 in his pocket.

Four-handed play had players jockeying for position, with Germany's Leonard Maue unable to get anything going. Maue three-bet all in with ace-seven suited for thirty big blinds, running into the pocket queens of Agarwal, who sent him packing in fourth. The German did win $174,252 as a consolation prize.

Agarwal held on to a commanding chip lead with neither Yifrach or Burns able to threaten his position as table captain. Yifrach had blinded down to a little over 11 big blinds when he got his chips in good with ace-queen against the ace-jack of Burns. However, Yifrach wasn't able to fade jacks on the flop and turn and he missed out on the heads-up. The start-of-day chip leader took home $257,533 for his third-place finish.

The heads-up match lasted 29 hands with Burns unable to get overcome Agarwal's chip lead, despite managing an early double up. The end came when Burns crashed king-eight into Agarwal, who held ace-king. The flop brought an ace and Burns had to settle for second and $389,832 for his debut WSOP final table on American soil, while Agarwal took home the bracelet and the first-place prize of $630,747.

That wraps up the PokerNews coverage of the 6-Handed Championship at the World Series of Poker. Follow along in the 2019 WSOP Live Updates section for the final live updates of the 2019 WSOP.