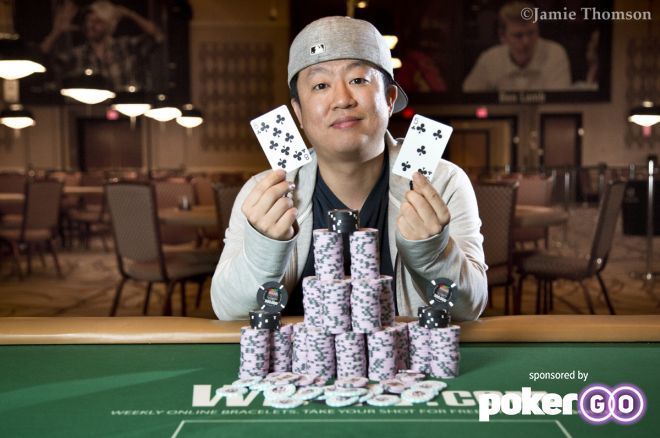 The 50th Annual World Series of Poker has crowned another champion in Daniel Park after an action-packed day of exhilarating poker. Park took down one of the quickest tournaments of the series in Event #12: $1,000 No-Limit Hold'em Super Turbo Bounty for a hefty $226,243 and a shiny new gold WSOP bracelet.

Park topped a field of 2,452 unique entries, enjoying all of the ups and downs throughout the day. He sat above average for most of the day and really started to run well just before the 28th level of play, being one of the first to hit the million-chip mark. Park put his foot on the gas pedal after that and never seemed to hit any bumps in the road until the final five.

Once down to the final five he played a hand against Erik Cajelais that ended with him being left with only enough for the ante plus just one more chip, that was automatically all in on the very next hand. When asked about the situation he replied: "It was a rough final table, I was playing really aggressive that ended up bringing me to one last chip, and from there I just had to play even more aggressive."

"I was playing really aggressive that ended up bringing me to one last chip, and from there I just had to play even more aggressive."

What he was thinking when down to one last chip, Park said, "I'm gonna take fourth, what is that, $75,000? I would have probably been happy with it."

This won't be the last we see of Park at the 2019 WSOP because he plans to play more events. "I wasn't thinking about playing the Main Event but this is going to force me to play it. I've always wanted to play the Main Event. I always used to watch it on TV, I thought it was like a TV show, I never thought I would actually be able to play it."

After a miraculous comeback, he is now the latest prestigious bracelet winner in the WSOP and will always have that on his resume going forward. When asked about capturing a bracelet park said, "I can't believe it right now, it's just so surreal. I don't know what to say to tell you the truth, I was just happy to be at the final table. I didn't expect to be in first place but I'm so glad. It worked out in my favor."

Ferit Bulut was the first casualty of the final table. Bulut was short and needed to find a spot to double up. When the time came, he moved all in with ace-king against Emil Tiller's ace-queen. The river was a queen ending Bulut's fantastic run in ninth place for $18,731.

Lian Liu was next to hit the rail. Park moved all in on the flop with middle pair, and Liu made the correct call with aces. He couldn't stay ahead though as the turn gave Park two pair and Liu was sent home in eighth place ($24,271).

He was followed by Travis Sargent in seventh place. Sargent was down to crumbs after losing with ace-king against Tiller's nines in an all-in preflop situation. He jammed his last six big blinds the very next hand with ace-jack but found himself in bad shape against Tiller's ace-queen to end his tournament life.

John Yelaney was the next victim. Yelaney only had two big blinds left and called a raise from Jennifer Dennis with his last chips from the big blind. Yelaney held ace-deuce but Dennis' ace-eight held to eliminate him in sixth place for $41,920.

Marcelo Giordano was knocked out soon after. After doubling Cajelas up in an all-in preflop hand, Giordano had less than a big blind left and was all in with four-three suited against Park's ace-king suited. Park improved to a full house, and Giordano was sent to the rail in fifth place.

Tiller was down to six big blinds and moved all in on the button with ten-deuce suited only to get snap-called by Park with ace-five in the big blind. Tiller couldn't improve, heading to the cashier instead.

Jennifer Dennis was Park's next victim. Dennis put up a good fight but it all came to an end when she jammed her last eight bigs with king-queen suited and got called by Park with ace-jack. The river was in Park's favor and Dennis claimed third place.

The heads-up portion of play lasted only two hands. In the final hand, Park raised all in on the flop with middle pair and got snapped by Cajelais's flush draw. The turn and river blanked and Cajelais had to settle for the runner-up title, while Park claimed his first bracelet.

That concludes the coverage of Event #12, but there's much more poker action going down at the 2019 World Series of Poker. Follow all the PokerNews updates here, and you can watch the exclusive streamed final tables at PokerGO.