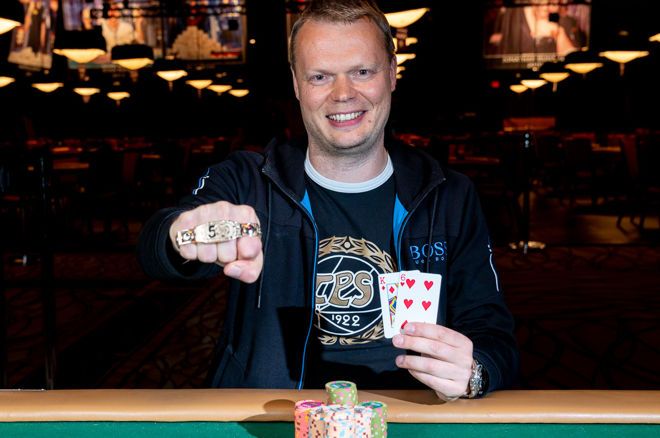 After a grueling thirteen hours on the final day of Event #72: $10,000 Limit Hold’em Championship , Finnish poker legend Juha Helppi finally claimed his first WSOP bracelet and the first-place prize of $306,622 that came with it. Helppi played Mike Lancaster heads-up for a long four hours to come out victorious in the end. The 50th Annual World Series of Poker edition of this tournament attracted 118 entries which beat last year’s number.

"Finally getting that bracelet that I’ve been looking for, like for 16 years, it’s amazing."

This is not Helppi’s biggest win ever, but the bracelet does mean the most to him: “I’ve been close to winning a bracelet many times, that’s why it was so exciting because it happened to me many times in the past. Finally getting that bracelet that I’ve been looking for, like for 16 years, it’s amazing.”

Helppi has come close many times indeed, finishing in second place three times, third once, fourth once, and fifth once at the WSOP. The most recent deep run was last year in Event #70: $3,000 Limit Hold’em 6-Handed where he lost out to Yaser Al-Keliddar. Helppi built his bankroll by playing Limit Hold’em and has a lot of heads-up experience, and this time it paid off.

Helppi already collected just over a million in cashes during the WSOP events, and even though he added a chunk to it now, he’s already got his sights set on the Main Event: “I’m playing it tomorrow, so I don’t have much time to rest. But maybe a new bracelet will be coming!”

The day started with fifteen players in their seats, and it didn’t even take ten minutes before the first player was sent to the payout desk. Spain’s Raul Paez was the first to go when he got all his chips in with pocket treys on the jack-seven-five flop and was called by Josh Arieh who held pocket kings. Arieh stayed ahead to claim Paez’s chips in the end.

Day 1 chip leader Andrew Brown started the day as the absolute short stack and couldn’t find a way to build his stack up as he was eliminated in thirteenth place.

Eli Elezra wouldn’t be adding another bracelet to his collection of four as Lancaster took him out. John Racener wasn’t going to win a second bracelet either as he too fell victim to Lancaster. Jerry Robinson ended up the final table bubble boy when Helppi eliminated him in tenth place.

The final table was almost an all-American fairy tale except for the lone Finnish player in Helppi who ended up beating them all. Helppi went into the final table second in chips and stayed near the top for most of the almost twelve hours it lasted.

"I’ve been close to winning a bracelet many times, that’s why it was so exciting"

It went from nine to six in a span of thirty minutes with Robert Como, Qinghai Pan, and Kyle Ray busting in that order.

It would take another eighty minutes of six-handed play before Josh Arieh was ousted with pocket sevens. Lancaster had king-queen on the queen-six-ten flop and held throughout the board to take Arieh down in sixth place.

Forty minutes later, Kevin Song was done for the night as he wasn’t going to claim his second WSOP bracelet in this event. Both him and Lancaster had flopped a pair of kings, but Lancaster was ahead with the ace-kicker and stayed ahead.

The four remaining players played two more hours before they all went on dinner break with Lancaster in the lead. Fifteen minutes after returning, Anthony Marsico ran out of chips when he was up against Helppi with ace-six while Helppi had ace-king. No help on the board and Marsico was sent to the payout desk to collect his second ever WSOP cash.

Tommy Hang had the most prominent and loudest rail of all which also included Chino Rheem and JC Tran during the breaks of the Main Event. After hanging on with a short stack for hours, though, Hang required help when almost all went in preflop with ace-ten. Helppi held ace-eight, and they both made a flush on the river with Helppi holding the nuts with the ace of spades.

"I caught a few of his bluffs, and I was able to do some correct moves and get some extra value when I had a hand. So in the end, I think I deserved it."

Heads-up the chips kept flying back and forth, both claiming the chip lead at certain points throughout the long battle. In the end, Helppi managed to grind it out and claim the win. “I think I’ve played the heads-up well; he was a good player. I caught a few of his bluffs, and I was able to do some correct moves and get some extra value when I had a hand. So in the end, I think I deserved it.”

“My rail helped me so much, it helped me through the bad times, it helped me play my A-game,” Helppi added at the end while his rail was still celebrating, drinking, and chatting in an empty Amazon room in the Rio All-Suite Hotel and Casino.

You can read the full reporting from this event in the Event #72: $10,000 Limit Hold'em Championship Live Reporting pages. Want to watch the WSOP Final Tables live? Sign up for PokerGO.com!