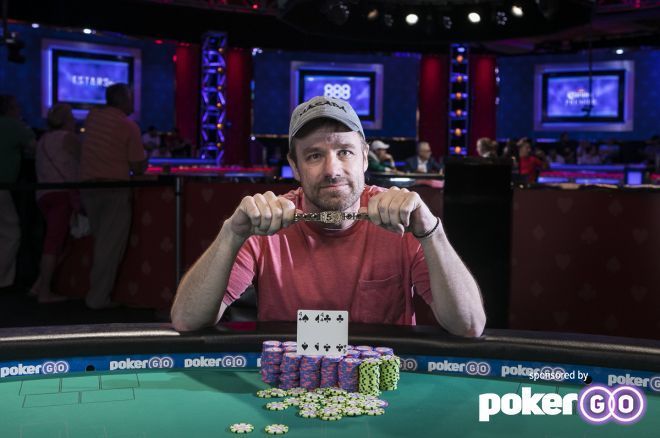 From a whopping 6,140 entries, the final player standing in the 2019 World Series of Poker (WSOP) Event #59: $600 No-Limit Hold'em Deepstack Championship is Joe Foresman, earning his first gold bracelet and an added $10,000 seat into the 2019 WSOP Main Event.

Not only is this Foresman's first win, but it is also his first-ever career cash, taking home $397,903 and a coveted gold bracelet. He defeated a worthy competitor in WSOP champion Will Givens, who put up a massive fight and settled for $245,606 runner up.

"It was fun to play in. Once we got into the money, I was thrilled no matter what happened. I would've been happy cashing out $1,500, $2,000," Foresman told PokerNews. Understandably, the newly-crowned champion was often speechless after he realized the tournament was over. "When I got to the final table today, quite frankly, I said if I finished in fifth I don't care. I mean, it's still $100,000. This is still more than anything I could've ever imagined."

"I had to get so lucky these four days. It's just one of those weeks."

The 49-year-old graphic designer and musician has been playing poker for over 15 years and is a single business owner.

This is his first live career cash and win as he has only really played in a few daily deepstack events. The one and only bracelet event he has played before this one was when the WSOP was at Binion's.

"We sit there and dream about [winning a bracelet], but we never think it's going to be a reality," continued Foresman. "I had to get so lucky these four days. It's just one of those weeks."

When asked what he's going to do with the money, Foresman admitted he wants to make solid plans for his future. "I've wanted to buy a house for a while, it really depends on a lot of different factors. I'm probably going to invest a little in my partner's business, and beyond that, I've been wanting to give something to charity, but I don't know what charity yet."

Day 4 began with just five players remaining, and Foresman started the day with the chip lead. He only relinquished the lead to Givens, but quickly got it back before winning the title.

In just the sixth hand of the day, a short-stacked Gleb Kovtunov got his remaining stack of about nine big blinds in before the flop with ace-six offsuit but was dominated by Jeff Hakim's ace-king. He turned a straight draw but the board bricked out, forcing Kovtunov to settle for fifth place and $102,077.

About 40 minutes later, it was Hakim who found himself at risk, going all in with ace-five. He was dominated by Givens' pocket queens and couldn't catch any heat. Givens rivered a set for good measure, and Hakim pocketed a nice payday worth $135,783 for his fourth-place finish.

Shortly after three-handed play began, Givens took over the chip lead, finally knocking Foresman down from the top spot. The two players battled it out on an eight-high flop with two spades, and Givens got aggressive with third pair. Foresman stayed in the hand with ace-high but Givens took his pair of sevens to showdown and snagged the chip lead.

It wasn't long before Foresman check-shoved all in on the river against Givens and got a snap-call. Foresman tabled aces up, and Givens flashed bottom two pair before sending the chip lead right back.

Steffen Logen hung around as the shortest stack for a while, and eventually found a double against the chip leader. It wasn't long before he started to fizzle out though and finally got his stack in the middle with pocket eights. Givens held queen-ten of spades and flopped a flush draw before turning a pair of tens to send the German packing. Logen licked his wounds but settled for $245,606 for his third-place finish.

Heads-up play didn't last too long with Foresman starting play with almost four times as many chips as Givens. Foresman won back-to-back hands, making trips in the first hand and then a flush in the next.

Givens was left with 20 big blinds, and then Foresman chipped away to bring him below 10 bigs. In the final hand, Givens got his stack in the middle with pocket tens, but Foresman flopped a set of fours to lock up the win.