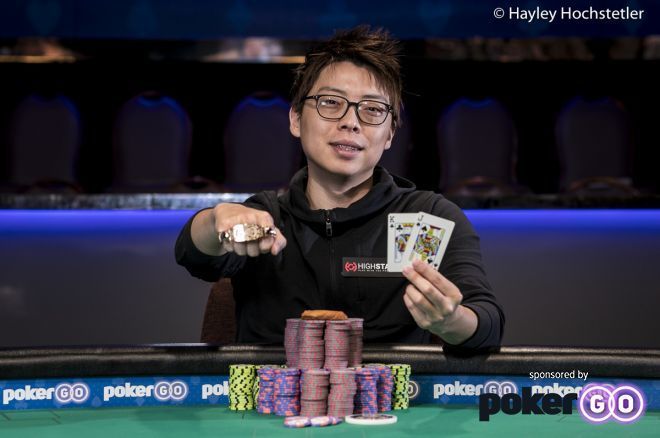 Joseph Cheong just won the first bracelet of his career in Event #34: $1,000 Double Stack No-Limit Hold’em of the 50th Annual World Series of Poker at the Rio All-Suite Hotel & Casino. Cheong takes home the first-place prize of $687,782 for his victory after defeating a four-figure field of 6,214 players, putting him at over $6,300,000 in total earnings at the WSOP.

With multiple previous victories and a third-place finish in the 2010 WSOP Main Event for over $4 million, Cheong is used to the highs and lows of poker, so he assessed his first bracelet win calmly.

“I have been playing poker for so long, it was just another day at work,” he said.

Previously, Cheong had been one of Las Vegas' most consistent grinders, with trophies from a number of different venues and a heap of cashes at the WSOP — nearly 40 total. Now, he's rounded out his collection with the most prestigious trophy of all in a WSOP bracelet.

Cheong had a decent stack during most of the tournament and managed to get closer to the top of the leaderboard when things mattered most, eventually bagging a massive chip lead for the final day with 100 big blinds in the bag. He was responsible for four eliminations at the final table.

With tons of experience, multiple final tables, and a comfortable chip lead, Cheong didn’t need much preparation for the final day.

“Me and my friends shared a bottle of wine, I slept really late, yep, that was my preparation,” he said.

Day 5 started with six players returning to the felt and within the first eight hands, only three players were left standing.

Soon after, Cheong eliminated Zinan Xu and found himself heads-up against David Ivers. Both of his opponents played their best game and the chip lead was going back and forth between the two of them during most of Day 4. Indeed, Ivers started the official final table as the chip leader.

“I think David (Ivers) was probably the toughest opponent on the table, but Zinan (Xu) played a little different from most grinders, which kinda threw me off a lot," Cheong said. "So, he was probably the most dangerous opponent for me."

When the heads-up portion of play started, Cheong had over a 3-to-1 chip lead. He didn’t waste time and quickly started applying pressure, soon extending his lead to an 8-to-1 chip advantage. Ivers managed to find a double when he was down to 18 bigs with tens against Cheong’s sixes in an all-in preflop situation to get the stacks back to the starting point.

However, that didn’t last long as Cheong quickly won his chips back and it was all over when Cheong moved all with king-jack and Ivers made the call with ace-three for his last 15 blinds. Cheong flopped a king and that was it for Ivers' tournament life.

As for Cheong, he doesn't plan on taking a break. Indeed, he's going straight back to the grind.

“I am jumping into the bounty tournament immediately," he said. "OK, maybe a bathroom break and a beer before I’ll jump in.”