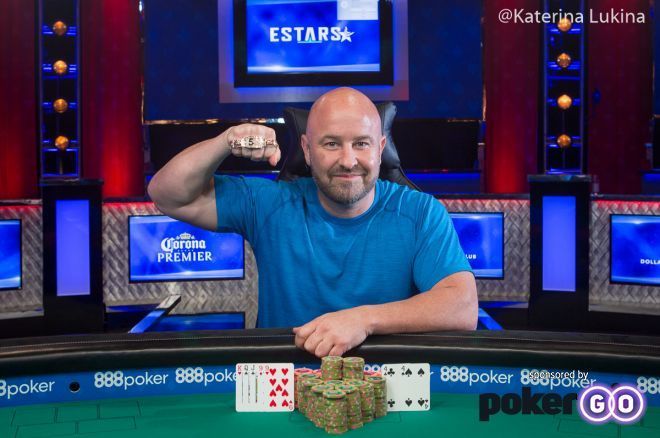 The second Shootout tournament of the 50th Annual World Series of Poker has crowned a champion and it was David Lambard topping a field of 313 players to take home the lion's share of a $845,100 prize pool, and most importantly, the elusive gold bracelet. For his victory in Event #36: $3,000 No-Limit Hold'em Shootout, Lambard received $207,193 after defeating French poker pro and poker coach Johan “YoH ViraL" Guilbert heads-up.

Heading into the final table at the Rio All-Suite Hotel and Casino, plenty of well-known poker pros had hit the rail in the previous two rounds, yet Lambard still had to face off against former bracelet winners Justin Bonomo, Alexandru Papazian and Andrew Lichtenberger. The 44-year-old, who has been playing poker for a living for the past 10 years, knew what to expect and how tough it would be to win.

"They are all wizards, they are all super pros, this was a top field going on."

“Actually, I knew this whole field was top notch," he said. "They are all wizards, they are all super pros, this was a top field going on. I was well aware of that. A lot of these tournament pros I don't even follow, I just know they are tough. I came with my own style. The only way to win a tournament is to have no fear.”

Down to the last three players, a key hand took place when fearless Lambard clashed with eventual third-place finisher Weiyi “Wayne” Zhang. Lambard raised with pocket sixes and jammed a ten-high turn with a gutshot, showing that he had no fear. Zhang called with queen-seven for trips and instead of the straight, Lambard spiked one of the two remaining sixes to take a commanding lead.

“I just went with it, I just had a feel. I am kind of an instinct player and these guys are pretty robotic and know the whole matrix. I am kind of old school. I play mostly play cash games and go with the feel. Like the bluff with the three-five, it felt like the right play and he folded.”

That bluff hand was run with five-high and a gutshot against Guilbert in the penultimate hand of the tournament, and he forced the Frenchman to lay down seven-four for bottom two pair. It was all over the very next hand when Lambard won a flip and posed for the winner shots a few minutes later.

“My dad played poker for a living, and it has been in my blood since the seventies.”

Lambard also admitted that he didn't have any special strategy for this Sit-and-Go format.

“Just a basic strategy. Play tight early and when you get down to five-six handed you open up. Establish a tight image early on. I noticed some of the other guys tried to accumulate chips faster. When it is nine or ten-handed, it is pretty ABC. I do everything off, unorthodox. Old school is all I know.”

Coming into the tournament, the father of three had four WSOP and WSOP Circuit cashes to his name with a top score of $107,640. This victory nearly doubled that and Lambard can usually be found at the cash game tables at The Bike, Commerce and in Gardena.

“My dad played poker for a living, and it has been in my blood since the seventies.” Lambard also mentioned Bobby "The Wizard" Hoff as his mentor. Going forward, Lambard will be playing some more events and also giving the upcoming $10,000 Main Event a shot.

After winning the initial full-ring round and getting past the four-handed stage in the second round, only 10 players remained and took their seats in the "Thunderdome." All eyes were on three-time WSOP bracelet winner Justin Bonomo, who eventually became the first casualty of the day. Down to around 15 big blinds in the third level of the day, Bonomo lost a flip with pocket nines against the ace-king of Ben Farrell.

Martin Zamani experienced a roller coaster ride in the early stages of the final table and went from one of the chip leaders to a short stack, doubled and then ran with queens into the pocket aces of Jan Lakota. No miracle queen showed up and Zamani bowed out a couple of hands later.

Down to the last eight, the live stream on CBS All Access and PokerGO kicked off and it would take 109 hands from there to determine a champion. It took 20 hands to reduce the field to seven when Adrien Delmas failed to hold up in a flip with pocket fours against the ace-queen suited of Zhang. Two diamonds on the flop gave Zhang a flush draw, running queens improved the Chinese player to trips instead.

After a move with king-nine suited against the ace-jack of Lichtenberger, Papazian was knocked down to less than one big blind. He more than doubled, but eventually came up short with king-eight against the ace-seven of Farrell. Just one hour later it was Farrell that headed to the payout desk as his ace-ten was no good against the pocket jacks of Lambard.

Lakota was the next to fall and again it was Lambard that did the work. Two ace-kings clashed and Lambard had them in spades, spiking two further spades on the flop and improving to the nut flush on the river. That hand vaulted Lambard into the lead with four players remaining.

Zhang doubled into the lead in a flush-over-flush clash with Lichtenberger, and he finished the job soon after with ace-ten against the queen-eight of Lichtenberger. However, Zhang would not become the fifth Chinese player to win a WSOP bracelet just yet as Lambard got there with pocket sixes against the trip sevens of Zhang, spiking one of his six outs on the river.

Lambard entered the heads-up with Johan Guilbert with a comfortable lead, but the Frenchman nearly closed the gap after taking down four hands in a row. With sheer aggression, Lambard pulled further ahead again and even a double for Guilbert with ace-jack versus ace-trey suited only changed the momentum for a few minutes. Eventually, it was a flip that decided over the victory when Lambard came out on top with pocket fours against ace-eight.