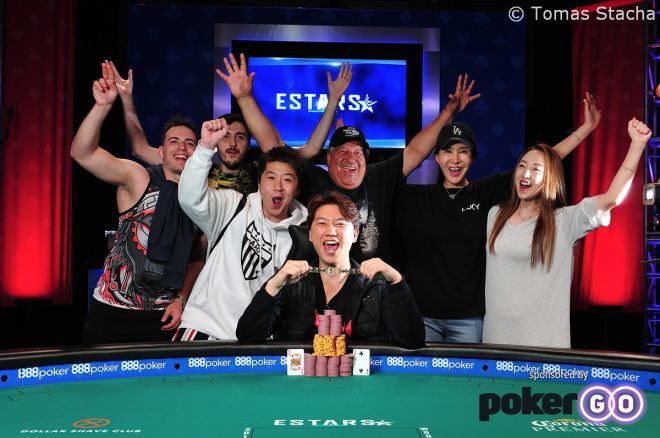 After less than five hours of play over 125 hands, the 2019 World Series of Poker Event #61: COLOSSUS - $400 No-Limit Hold’em crowned its winner in Sejin Park who won the second WSOP gold bracelet for South Korea this summer.

Aside from the bracelet, Park also took home $451,272 as the lion share of the $4,391,515 total prize pool, which was created by the 13,109 entrants over two starting days. Park defeated Greece’s Georgios Kapalas heads up with the Greek taking a consolation prize of $278,881.

Park's victory was the first-ever bracelet for South Korea in an open event. When he found about it he responded: "I actually had no idea I was the first. My friend [Jiyoung Kim] won the ladies event earlier this summer, but knowing I am the first in an open event makes me even happier."

Park mainly plays cash games in Macau and hardly ever ventures into the tournament circuit. His win smashes his previous cashes by a mile. He added: "I didn't expect a lot from this tournament, with such a low buy-in I knew there would be a lot of entries."

The final eight players returned to the Rio All-Suite Hotel & Casino at noon local time to play down to a winner with nineteen minutes left in Level 42. Kapalas kept building on his chip lead throughout the first part of the day.

Park doubled up once more with pocket nines before the curtains fell for Maksim Kalman when he three-bet shoved with king-jack and was called by Andrew Barber, who held the pocket jacks. Even though Kalman picked up a straight and flush draw on the turn, he bricked the river to be sent to the payout desk to collect $53,925.

Miller picked up a pay jump but left the final table in seventh place for $69,757 when his ace-seven couldn’t win against the king-queen of Kapalas who turned two pair the higher two pair to eliminate him.

Ryan Depaulo, Saho, and Park all doubled up while Kapalas was using his big stack to keep the pressure on the short stacks. The noisy Brazilian rail was on par with the Greek one but they made their way out of the tournament area when Saho got his last nine big blinds in with pocket queens when he called Park’s shove. Park, who barely had the bigger stack, held ace-five and found another ace on the river to send Saho away in sixth place. Park then doubled through Kapalas to take over the chip lead.

Juan Lopez also doubled up through Kapalas to stay alive. Depaulo and Barber then doubled up after that. Nine hands later, Kapalas raised big and Barber called off with ace-trey in the first hand after a break. Kapalas found pocket rockets and they held to send Barber out the door for $119,072, some of which he planned to donate to charity.

Lopez found another double-up for a glimmer of hope, but a mere 20 minutes later, he shoved his last chips in from the small blind with ace-trey. Park held queen-ten and flopped a pair of queens and even improved to a flush to send Lopez packing in fourth place for $157,106.

Two hands later, Depaulo, who is also known from his Youtube channel: Ryan Depaulo: Degenerate Gambler, was done for the day after he shoved the last of his chips in after Kapalas had bet on the king-eight-four flop. Depaulo hit middle pair but Kapalas was ahead with the overpair of aces. The rest of the runout didn’t change anything as Depaulo and his rail sporting the same caps made their way out of the feature table stage.

Heads-up play only lasted thirteen hands in which Park ground Kapalas down hard. In the end, Kapalas shoved his last eight blinds in with ace-trey after Park had raised with king-deuce. Park flopped trip deuces and held on for the rest of the board for the Korean rail, which also included Jiyoung Kim who won the Ladies Championship earlier this week, to celebrate loudly while the Greeks consoled Kapalas with his runner-up finish, which was his best ever career-cash and more than doubled his previous personal best.

Park gave credit to Kim for being on his rail alongside his other friend: "I would talk strategy during the break with them and it was a tremendous help."

It marked Park's first time in Las Vegas for the WSOP and he is definitely going to play some more tournaments this year. One tournament which is 100% on his radar is the Main Event because that is the main reason why he came over to this side of the world.