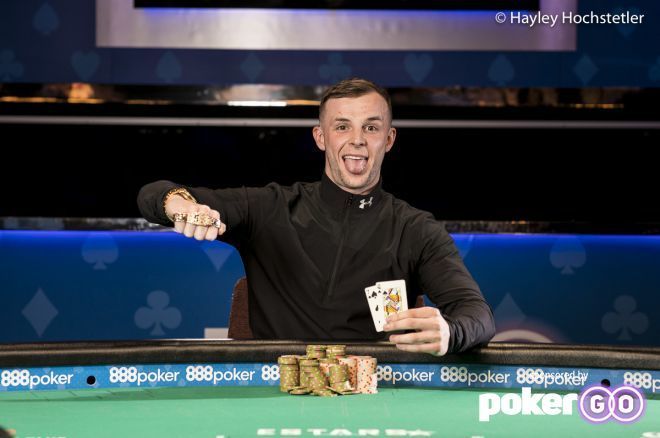 A champion has been crowned in the final event of the 50th Annual World Series of Poker! Britain’s Carl Shaw defeated Tony Dunst heads-up for $606,562 and his first-ever gold WSOP bracelet.

"It made me more hungry, to be honest. More hungry to be out here, winning more tournaments. I’m going to be back for more bracelets."

With Shaw’s bracelet, the United Kingdom laid claim to four bracelets this summer. Ben Heath, Stephen Chidwick, and Luke Schwarz went before him this summer.

This is Shaw’s fifth WSOP cash but only his second in Las Vegas with his first being a deep run in the Main Event this year when he finished in 101st place for $59,295 — his previous best tournament result until this win. But he’s no rookie on the poker circuit, with his first cash on The Hendon Mob recorded in 2013. This result brings his total live earnings to just over $750,000.

Shaw said he used his Main Event finish as motivation for the next tournament on his schedule: “I was a little bit disappointed to be honest, obviously as everyone would be busting that deep in the Main. It made me more hungry, to be honest. More hungry to be out here, winning more tournaments. I’m going to be back for more bracelets.”

Shaw said the following about the final table: “There were some tough players at the final table. I had to pick my spots and adjust my game. Obviously, I had a bit of luck on my side, so that helped.”

The Road to the Final Table

The second and final day started at noon with 44 players in their seats. With the 30-minute blind levels, the eliminations were coming in from all over the place. In under an hour, the field was reduced to the final three tables with Joe Cada, Mike Matusow, Michael Mizrachi, and Alexandru Papazian being amongst the first eliminations.

Two-time bracelet Kristen Bicknell winner was eliminated by Jonathan Little when they both flopped a flush draw, but neither completed it. Little did however turn a pair to send the Canadian to the rail in 22nd place for $16,582.

The Day 1 chip leader Liran Twito five-bet shoved into David “ODB” Baker with ace-queen and was called by pocket kings who held throughout the board. Baker and Shaw were both at the top of the chip counts when there were only two tables left, but in a big pot, Shaw took over the first position from Baker when he had turned two pair.

Anatoly Filatov fell in eleventh place when he first doubled Luke Graham and then lost his last big blind to him too.

The floor had already decided when there were 11 players left to combine the two tables at ten players and then move them to the other side of the Amazon room for partial coverage on PokerGO. Baker was the first to leave the unofficial final table after the defending champion, Phil Hellmuth, had managed to double up twice.

Shaw was responsible for eliminating Kevin Eyster and Rami Mornel, while Hellmuth took out Caufman Talley.

Dunst then eliminated the Poker Brat who held five-trey while Dunst had the better hand with ace-ten. Dunst flopped top pair on the deuce-ten-four board, but Hellmuth picked up the open-ended straight draw. The turn gave Dunst two pair and Hellmuth the wheel, but the river gave Dunst the full house to send Hellmuth on his way to the ESPN commentary desk to do his Main Event duties.

Germany’s Lars Kamphues fell victim to Shaw’s fantastic run. He first doubled with eights against Shaw's queens by flopping an eight, but the very next hand he lost with kings to Shaw's ace-ten after two aces hit the flop.

Jordan Cristos spent a lot of his day checking out the stacks of his opponents in the tournament and calculating their blinds on his phone but saw his deep run end in fourth place when Dunst took him out with a turned pair of deuces.

Three-handed play only lasted five hands when Graham’s ace-six failed to win against the ace-eight of Shaw.

“It was really gamble(y) towards the end, but luckily for me, I was on the right side of the luck when it came to the flips. We both had short stacks, so it was tricky for both of us,” Shaw remarked about the heads up.

"it’s my mum’s first time in America. I wanted to make her proud, and I know I’ve done that now."

The double-ups were abundant with the chip lead alternating between them, but in the end, Shaw was triumphant when he rivered a flush to see his rail run into the tournament area to celebrate his fantastic victory. Shaw was cheered on by family, friends and his girlfriend who were pressed tight up against the rail craning to see his every action at the final table.

“I think that made me want it more. Having everybody here; it’s my mum’s first time in America. I wanted to make her proud, and I know I’ve done that now.”

The WSOP might almost be over, but there are still plenty of reasons to sign up for PokerGO! There are decades worth of WSOP footage, super high roller, and other shows available!