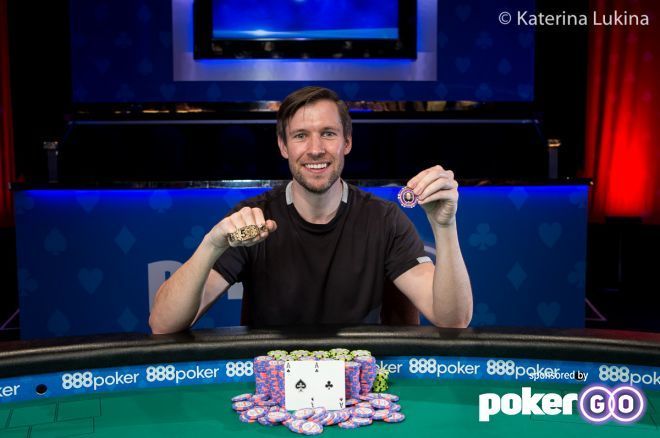 While Koral is primarily known for his mixed game chops, winning his second bracelet in the most ubiquitous game of all was special to him.

"It means a lot to me specifically because it's hold'em," Koral said to assorted media directly after his victory. "I think a lot of people look at me as mixed games primarily, so this was kind of my way of showing I could still play hold'em," he chuckled.

"It feels great, it feels incredible, and it's sure gonna take a day or two to settle in."

"It feels great, it feels incredible, and it's sure gonna take a day or two to settle in."

Koral's career dates all the way back to 2005, and an impressive poker resumé of over $2 million in lifetime cashes on The Hendon Mob shows he's been successful at all the different poker formats for a long time. Koral shared his secrets for staying fresh, sharp and on top of the game.

"I have a brain that's constantly wandering, so especially when I'm out here for six weeks I can really get in the zone and constantly think about poker and poker hands. Always just analyzing myself: win or lose the hand, I'm always analyzing. It's the constant analysis of my own play to get me to where I am."

"Being very self-reflective and being honest with yourself is probably the most important quality you can have as a poker player and I think I do that pretty well."

In order to become the all-around player he is today, Koral's skills were sharpened by the tough Chicago games that fellow Chicago pro Brett Richey introduced him to. Richey was on the rail to support his friend towards a second victory.

“He got me into the idea of playing some of these mixed games. When I started, actually, I was probably playing way too high of stakes, and I was really bad. I was probably the guy getting followed around at the tables. I was the soft spot,” Koral laughed.

Koral, however, was willing to pay to learn and saw his investment pay off down the road as the former "mark" now has a second bracelet donning his wrist to join the exclusive club of multiple WSOP bracelet winners.

Koral came back at noon local time together with seven other competitors for an unscheduled third day to play down to a champion. The American was flanked by four countrymen, Scholten from the Netherlands, and two players from India: Kalyan Cheekuri and Kunal Punjwani.

For the Indians, however, the final table would become one to quickly forget. Cheekuri made a move with an underpair but ran his lone pocket fours into a set of sixes to be the first to leave the final table. Punjwani followed him quickly out of the door when his trip sevens got cracked by another pair of sixes, this time improving to a runner-runner straight.

After playing six-handed for a while, the others would drop off one by one as stacks grew shallow with the 40-minute levels. Darren Rabinowitz lost his final scraps to Shulman before Adam Hendrix had to bow to Scholten in the biggest pot of the tournament at that stage. Hendrix four-bet shipped pocket tens into pocket queens, saw no improvement, and had to depart while being second in chips. Scholten propelled himself to a monster stack as a result.

Scholten also knocked out Philip Scaletta then denied Shulman his attempt to win a third bracelet to start heads-up play sporting a slight lead over his adversary. However, a key hand would soon take place that saw Koral improve to a lead he wouldn't give up. In the pivotal hand, Koral raised with ace-five first to act and saw Scholten throw in a three-bet.

"First of all, he was a very good player. I think good players like to step on the gas early, to let their opponent know they're not going to be pushed around," Koral explained. "So I was expecting to get three-bet early in the heads-up match. I have an ace heads-up and having position is so valuable."

The flop came jack-jack-ten rainbow and Scholten threw out a small continuation-bet. Bets are often polarized here, according to Koral, and he called figuring his ace-high was still good often enough to call one bet. The turn brought an offsuit deuce and Scholten checked. Koral bet 8.5 million, around 40% of the size of the pot, and Scholten called.

"I want to bet my ace-high for value, a little protection. But I also have position, I can put hands like pocket sixes or ace-nine in a really weird spot," Koral explained. As it turned out, Scholten would check-call with king-queen for king-high and the Broadway draw. An offsuit trey landed on the river and both players checked to award the key pot to Koral.

After the key hand, the Chicagoan widened the gap even further before laying a trap that would finish the talented Dutchman off for good. Holding pocket aces, Koral limped the button. Scholten pushed with the queen-trey of diamonds and Koral snapped it off. He held up to become the fifth player of the summer to win the final hand of the tournament holding the blades.