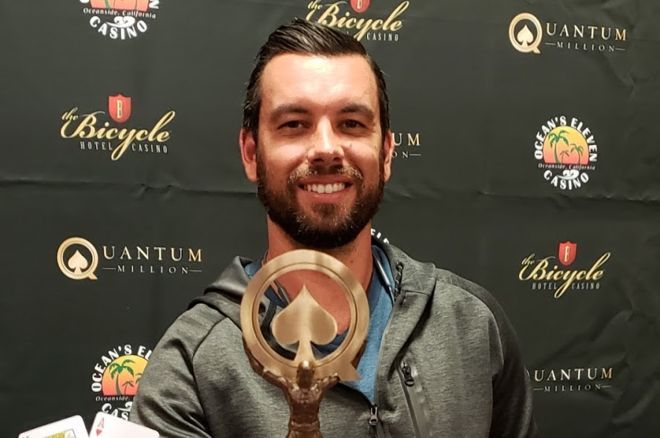 One of California's bigger fall events ended Tuesday with a four-way deal as The Bicycle's Quantum Millions awarded four players in excess of $95,000 in prize money.

"I don't believe it," Purpero told reporters. "It still hasn't hit me yet I don't think."

The tournament sported a $1 million guarantee and a unique format wherein $360 starting flights were played out earlier in the month at both The Bicycle and Ocean's Eleven. Players could then buy directly in to Day 2 for $2,200. In total, 2,887 entries were logged for Day 1s with another 179 firing on Day 2 for a total prize pool of $1,265,227.

Some of those making Day 3 but busting before the final table included Mike Shariati, Rich Alati, Nick Grippo and Mohsin Charania.

German pro Marvin Rettenmaier was by far the most recognizable name at the final table. He got there right on the heels of making another deep run in a Bicycle event, but this time he was among the shortest stacks to start the final table.

According to the live updates, though, Rettenmaier got off to a roaring start and surged all the way into the chip lead before even a single player went bust on the final day.

Meanwhile, Strickland started the day with the lead but bluffed off nearly all his chips with a missed straight draw when Brown looked him up with

on a board of

. However, he got his last few blinds in and scored two quick doubles to get back in it.

Purpero then busted AJ Armstrong in a flip with ace-king over eights, and the first round of deal talks began six-handed after Vuong Do went out in seventh. However, no agreement was reached and the players battled on.

Tigran Abgaryan bluffed off his chips to Strickland, and then Purpero flipped for his tournament life. He again had the big cards with ace-king, this time fading two nines held by Kung. A nine-high flop appeared to spell the end for Purpero but he ran out a wheel to score an unlikely double into the lead.

Rettenmaier wouldn't be so lucky in his own flip when his ace-queen failed to connect with the board against Strickland's jacks.

That prompted another round of negotiations four-handed, and the players agreed to a structure that saw Purpero get the most money and pose for a winner's photo to end the event.

Photo courtesy of The Bicycle.