Stoyanov, Klodnicki Chop Card Player Poker Tour Main Event at The Bike for Over $100K Each 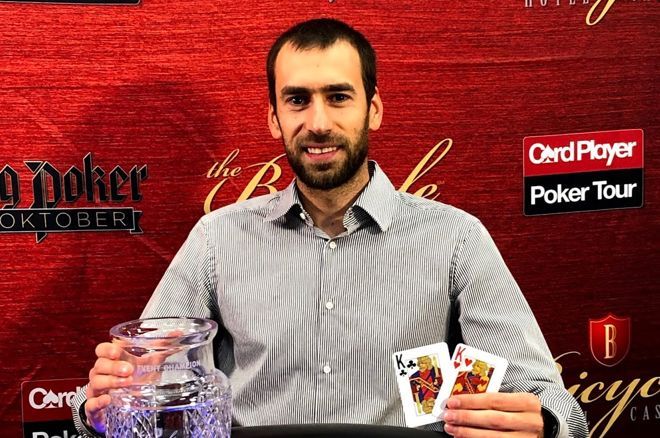 Bicycle Casino in Los Angeles saw its Big Poker Oktober festival wrap on Monday with the end of its $500,000 guaranteed Card Player Poker Tour Main Event. As Monday evening drew to a close, two players remained, and they opted to chop up the remaining monies, with well-known pro Chris Klodnicki and Vyacheslav Stoyanov each securing just under $110,000.

Klodnicki, a 2017 bracelet winner, surpassed $10 million in live cashes with the deal. After a slow 2018 in which he banked only $120K on the live felt, according to The Hendon Mob, Klodnicki is back to his usual ways, cashing over $500K for the fourth time in the past five years.

The tournament featured the Bike's favored "quantum reload" structure, wherein players could buy in for $1,100 on one of three Day 1s — each featuring single reentry — or direct buy into Day 2 for $4,300. Around 500 entries were logged — official numbers haven't been released — including 29 on Day 2, for a prize pool north of $600,000.

Some of the players who made the 63 paid spots, according to the Bicycle Poker Blog, were Jordan Cristos, Sean Yu, Peter Neff and Joe Serock.

Marvin Rettenmaier would bubble the streamed final table in 10th when he ran pocket sevens into an opponent's pocket aces to bust.

At the final table, Klodnicki and Stoyanov each scored an early knockout. The latter busted Daniel Shea with

blind on blind, and the former sent Nicky Komphouvong packing courtesy of aces over jacks in a cooler hand.

Klodnicki then reduced the field to five by busting short stack Tarun Ravi.

Jim Collopy started the day as the chip leader, but not much went right for him on Day 3. He hovered a little below his start-of-day count for much of the early portions, and then ran ace-nine into the ace-kick of Peter Hengsakul blind versus blind. That relegated him to a fifth-place finish, the same as he got last year in a field of 478 entries for just shy of $30,000.

Klodnicki Has to Settle

Klodnicki held a sizable lead four-handed with half of the chips. He furthered his lead on an

flop, when Brendon Williams check-raised all in against him with

only to run into a monster:

However, a beat would cost him that lead when Stoyanov tried to make a move, four-betting all in with

. Klodnicki went with his

only to see a flopped pair of twos best him for a large double. Instead of having 13 million of 17 million in play, Klodnicki found himself in second.

Another cooler in his favor, this time aces over tens, enabled him to bust Hengsakul, though.

With nearly even stacks, Klodnicki and Stoyanov opted to make a deal, with Klodnicki earning slightly the better piece of the money. However, Stoyanov won a blind all in for the trophy and goes into the record as the official winner.

Photo courtesy of The Bicycle.