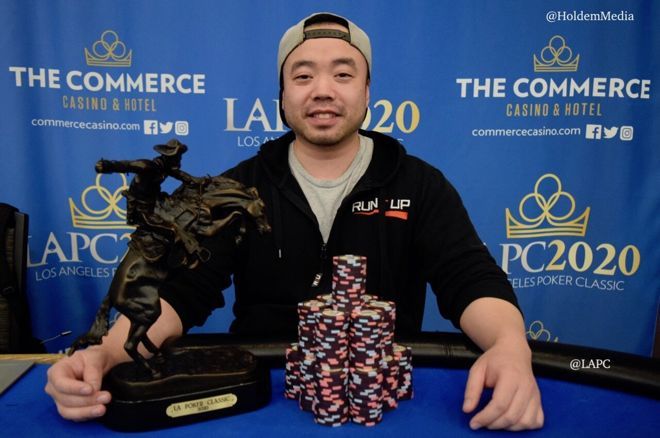 It was a busy weekend for live poker tournaments across the U.S. In addition to the slew of events covered right here on PokerNews, a couple of big tournaments wrapped up in Las Vegas and Los Angeles, with nine players banking $100K-plus scores.

Meanwhile, in the desert, another five-way chop occurred. Venetian hosted its popular DeepStack Extravaganza, and Anthony Spinella added to his accolades in the $1,600 Main Event with a score of $165,000, tops among the deal-makers.

The $1 million guarantee was easily met at Commerce as 1,390 entries were logged in the event, which features four starting flights and single reentry per flight.

According to the live updates, the players reached a final table and played down to six with George Fuchs holding a decent-sized lead with 10.7 million at 75,000/150,000/150,000. Everyone else was tightly packed between 5.2 million and 6.7 million.

Eventually, Nick Grippo went down in sixth, leaving action five-handed. Play continued past midnight until only about 140 big blinds total remained in play. Short stacks survived several all-in pots over the course of two hours, and the final five ultimately opted to make a deal rather than continue to play with dwindling chip stacks.

With a narrow chip lead, Nguyen was named champ and banked $132,210 with Jared Griener, Scott Stewart, Ivan Emanuely, and Fuchs following him, all netting six-figure cashes.

Despite featuring several hours of Day 2 registration, Venetian was forced to cover about $42,000 in overlay in their Main Event as only 599 entries were logged in the $1 million guaranteed tournament.

According to the live updates, Spinella advanced to the final table in second place but quickly won a big pot as chip leader Davis Harari bluffed off to him on a board of

. Spinella bet-called on the river with

Spinella then scored two eliminations before fellow bracelet winner Clayton Maguire got three-outed with ace-king against king-queen to bust in seventh.

Tuesday is the New Friday at Casino.com

Wild Blood 2 Slot Review: Sink Your Teeth into It!