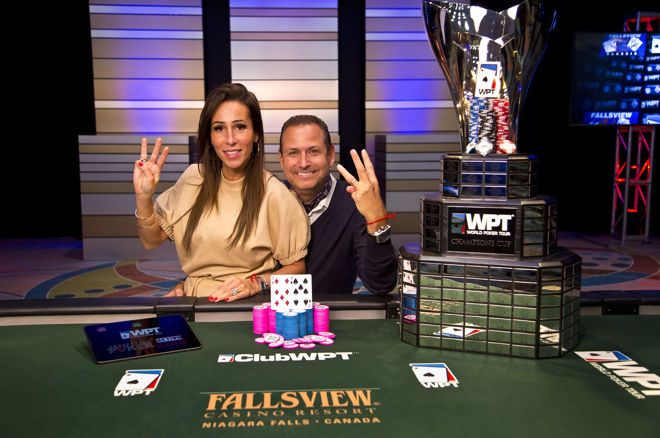 "When I finished second I was depressed," Afriat said to the WPT team. "I was depressed. I came in as the chipleader heads-up, and I was excited. I said, 'This is it, it's my third title.' But I left empty-handed, and it hurt so much. But who hurt the most was my son. He told me, 'Daddy, you didn't come back with the trophy.' I said, 'I'm going to get you another trophy,' I told my wife."

"That's the motivation I needed to go and win another trophy," Afriat said.

Afriat defeated Canadian pro Marc-Olivier Carpentier-Perrault heads-up, the latter having to settle for CA$356,180. Defending champion Demo Kiripoulos made another deep run in the event, but his attempt to become the first player in WPT history to win the same event in back-to-back years ended up in fifth place (CA$125,850).

Afriat sat down at the six-handed final table as the short stack with only 15 big blinds. After Zuhair Al-Pachachi got eliminated first with ace-ten versus ace-king, Afrait slipped even further, down to just eight bigs. According to the live updates, it was a stroke of good fortune — combined with a little precognition — that turned things around for the Canadian. Getting it in with

, Afriat specifically called for the deuce of clubs and received it as the window card.

, only to catch a king on the turn to escape elimination again. He then took out defending champion Demo Kiriopoulos with pocket jacks against

. Adam Hui proceeded to knock out Nguyen in fourth before he met his own demise about 50 hands later at the hands of Carpentier-Perrault.

It took only five hands of heads-up to reach a conclusion, with Carpentier-Perrault four-bet shipping

of Afriat. The board ran out

Afriat's third WPT title makes him only the sixth player in the WPT Champions Club history to win three or more WPT titles.

The next big stops on the World Poker Tour Season XVIII schedule are the WPT Rolling Thunder from March 7-10 and the WPT Venetian from March 13-17. Both stops feature a $5,000 buy-in with the Main Event in the Venetian guaranteed to have a $2,000,000 prize pool.