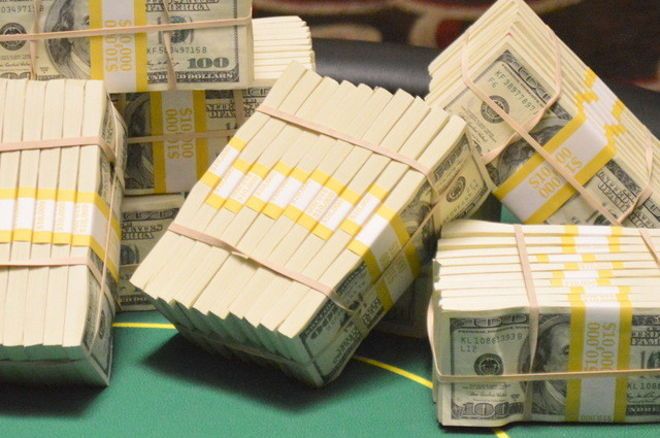 The first match of the Galfond Challenge is over. After two long months and 25,000 hands of €100/€200 pot-limit Omaha action, Phil Galfond emerged as the winner over "Venividi1993" by the barest of margins.

The wild ride saw Galfond go down more than €900,000 and then climb all the way back to take the lead, only to trail in the waning moments before snatching victory. He shared the graph of the match from his perspective on Twitter:

To get a more granular looks at the biggest swings, PokerNews decided to comb through the pots and single out the largest of all, the ones whose outcomes ultimately had the biggest impact on the final bottom line.

flop. Galfond led with small sizings of a quarter pot then €1,350 on the

river, Galfond checked and Venividi bet €12,389. Galfond shoved for Venividi's remaining €16,412, and Venividi didn't need too much time before calling with

for top set on the flop and a seven-high straight on the river.

Unfortunately for him, Galfond had

Galfond raised to €600 and Venividi called. Venividi check-called a bet on the

flop and then checked the

for a missed wrap and zero showdown value, and Venividi had looked him up with

Venividi raised to €600 and Galfond called, bringing a flop of

. Venividi continued for about €800 and Galfond called for an

The river was an

and Galfond piled for €24,984. Venividi decided to go with his

, having turned the nut straight, but Galfond had the same straight with

, except he improved to a flush on the end.

Venividi raised and Galfond three-bet to €1,800. They went to a

flop and Galfond led small with €899. Venividi called and a

arrived. Galfond slowed down with a check and Venividi bet just over half the pot, €2,753. Galfond raised to €13,658, and Venividi called to see a

Galfond had just €19,654 left and he ripped all of that in. Venividi called fairly quickly with

for top set, and Galfond had found his own inferior set with

flopped. Galfond led small with €1,187 and Venividi peeled for a

. Galfond bet half pot with €2,987 and Venividi responded with a pot-sized raise to €14,935. Galfond thought awhile and called, bringing an

was good for just kings and sevens, no match for

for kings and queens.

Galfond put in the preflop three-bet to €1,800 and liked the

flop enough to pot it. Venividi potted and Galfond timed down a bit before stuffing it for Venividi's €32,037. Venividi obliged with a quick call.

Each player had a straight draw, but Venividi was pairless with his wrap and therefore trailing Galfond's pair of fours. That measly pair was good for a €67,674 scoop after the

A preflop war started with Venividi raising to €600, Galfond making it €1,800 and Venividi potting right back to €5,400. Galfond called and they went to a

but was in awful shape against

for top set and a straight draw. A

river left Galfond with a winning full house for €65,760.

Galfond three-bet to €1,800 preflop but slowed down with a check on

. Venividi took the opportunity to fire €1,835, a hair over half the pot. Galfond went nowhere, bringing a

. Venividi went bigger this time with a full pot-sized bet, and Galfond again check-called for a pot of €21,809. The river was a

Galfond went with a final check and Venividi potted for all but his last €4,571. Galfond timed almost all the way down then clicked the call button. That proved a profitable decision as Venividi's

was good for just a pair of eights, while Galfond showed down

Galfond raised on the button and called a three-bet to €1,800 from Venividi. On the

flop, Venividi continued for €1,835 and Galfond called. The

prompted a check from Venividi and a pot-sized bet of €7,269 from Galfond. Venividi raised all in for €29,034 and Galfond made a fairly quick call with

for tens and fours.

for top pair, open-ended and a flush draw. Galfond did manage to fade it as the

Another Galfond three-bet made the pot €3,599 preflop. Galfond check-called half the pot on

turn. Venividi potted and Galfond used nearly all of his time before doing the same for €28,792. He still had €213 left and called that off when Venividi reraised.

Trips for Galfond, but he needed help against Venividi's full house. The

Read to join Phil on Run It Once Poker? Learn about how the Galfond Challenge can put more money in your pocket by clicking here.