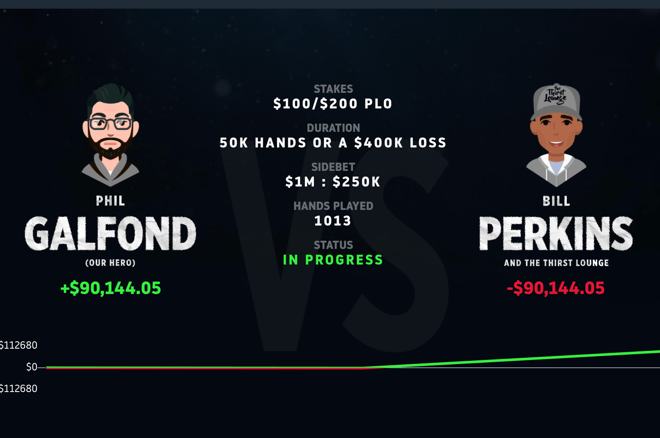 In the aftermath of winning his 25,000-hand match against "Venividi1993", Phil Galfond didn't waste any time with either celebrations or preparations for his ongoing Challenge series.

Instead, two days after wrapping up his epic victory, Galfond sat right back down at the tables and traded the first blows with opponent No. 2, high-stakes tournament vet Bill Perkins. The stakes: $100/$200 pot-limit Omaha with Galfond laying $1 million against $250,000 that he'd win across either 50,000 hands or a $400,000 stop-loss.

With the match this time taking place on partypoker, the players got off to a bit of a slower-paced start, playing one table rather than the two viewers were used to from the "Venividi1993" match. While Galfond dug himself a hole of about $50K, he recovered for a small loss of just over $1,500. A follow-up session went far better for the Run It Once Poker boss as he savaged Perkins for more than $90,000 to open up a wide lead.

Check out the latest promo on Run It Once Poker: Greenback, where Phil will send back a chunk of his wins to the players on RIO!

After Galfond opened up winning some pots, Perkins took the lead when Galfond bluffed off a bit into his turned aces full on

. Galfond opted to check and try to win showdown with a straight he made on the river but Perkins had

and Perkins called. On the

river, Galfond potted again for $3,597 and Perkins responded by potting it himself. Galfond folded his full house and Perkins was up more than a buy-in.

Perkins continued to show down winners, and Galfond sank to about $45,000 in the hole. On the way, he did dodge several big hands with river checks back, so things could have actually been worse had he opted for some river bluffs.

Galfond began recovering with a big pot when he three-bet preflop to $1,800 and bet small with $1,079 holding

. Perkins raised to $3,958 and Galfond called. Both checked the

river. Galfond potted and got called to scoop a $34K pot. He won another big one defending

and flopping trips on

turn and potted the river for $9,592, getting called twice.

flopped. They both checked to a

turn. Perkins checked and Galfond potted for $3,599 with

river. Perkins check-folded to half pot.

Perkins crawled back in front though, highlighted by winning a four-bet pot with aces over kings when each player checked down a dangerous board after missing turned diamonds.

Galfond got off to a small early lead, but Perkins worked his way back and scooped some pretty sizable pots and evened things up after around half an hour of play. Perkins continued to show down strong, but Galfond was pleased that he dodged several big ones by checking back marginal hands or potential bluffs on the river.

Galfond began building some momentum when he three-bet

flop. Galfond bet small with a little less than $700 and Perkins peeled for a

turn. Galfond opted to check this time and he called $2,457 from Perkins. On the

river, Perkins barreled again for $7,435. Galfond raised all in and Perkins gave up the five-figure pot. Another big pot with a boat followed as Galfond potted for $2,398 on

and Perkins paid it off for a $53,995 pot with what Galfond said was tens full.

flop, Perkins bet half pot and Galfond piled. Perkins stuck it in and had the good preflop with

and Perkins dragged a $59K pot with a straight.

turn. Perkins check-raised all in for Galfond's $31,170 and was staring at a one-outer with a set of queens. The river didn't save him and Galfond collected the enormous pot.

Galfond's hot run continued when both players were dealt aces and got stacks in. Despite Perkins having the more attractive side cards with

, Galfond made a diamond flush. They took a break after about four hours with Galfond sitting on $140K.

After break, Galfond won a $32K pot when he turned the nut straight and checked back, and Perkins potted the river then paid off a pot-sized raise. Perkins struck back on a sick cooler though. Galfond bet all three streets with

Follow along with all the latest on the Galfond Challenge.